These murals are part of a larger digital campaign going on during Fair Trade Month. Through the campaign, conscientious shoppers will have a variety of ways to voice their choice for Fairtrade and win various Fairtrade prizes.

In honor of October as Fair Trade Month, Fairtrade America is launching its second annual national campaign to generate broader awareness for how a simple action, such as purchasing a Fairtrade certified product, can be a powerful way to make a difference in the lives of the almost 2 million farmers and workers participating in Fairtrade across the globe.

The "Choose Fairtrade. Choose the world you want." campaign features murals in three major U.S. cities—Austin, Minneapolis and Tacoma, Washington—that connect stories of the people who produce the things we enjoy every day, including cocoa, bananas, coffee and more, to the positive impacts of Fairtrade. Now in its second year, this campaign brought inspiring murals to Denver, Los Angeles and Nashville in 2020.

Throughout October, consumers can participate in online giveaways and learn more about Fairtrade via educational resources at choosefairtrade.org. When shoppers see the Fairtrade America label on a product, it means farmers were fairly compensated and the ingredients were sourced in compliance with Fairtrade’s rigorous gender equality, fair wage, climate change and child labor standards.

Fairtrade America partnered with notable mural artists and key retailers in three major metropolitan cities where mural art is already a prominent part of the culture. Each mural features real farmers and a key benefit of choosing Fairtrade. While consumer awareness and purchase intent of Fairtrade products is increasing in the U.S., this campaign is intended to reach more Americans and educate them about the value of purchasing Fairtrade certified products. Visit Fairtrade’s new Product Finder to easily identify and purchase thousands of certified products.

“We are thrilled to continue a campaign that beautifully celebrates and honors the hardworking farmers and workers who produce the goods we enjoy everyday, while overcoming tremendous challenges to do so,” said Peg Willingham, executive director of Fairtrade America. “We hope this positive expression of Fairtrade’s mission inspires shoppers to give more thought to the people behind the foods they purchase, and opt for Fairtrade certified products when possible. Choosing Fairtrade certified products actively supports initiatives that fight poverty, foster gender equality and more across the globe.”

Fairtrade is an alternative approach to trade based on partnership instead of exploitation, a partnership between those who grow our food and we who consume it. The producers featured in the murals represent millions of farmers in the Fairtrade system who receive fair compensation for their goods and assistance producing them in compliance with rigorous gender equality, climate change and child labor standards.

Fairtrade’s model includes a Premium fund that farming cooperatives receive on top of the price of the product. Co-op members vote to determine how the money is spent; typically deciding on community programs such as access to education or healthcare. In 2019 Fairtrade Premium funds contributed more than $228 million to farming communities. 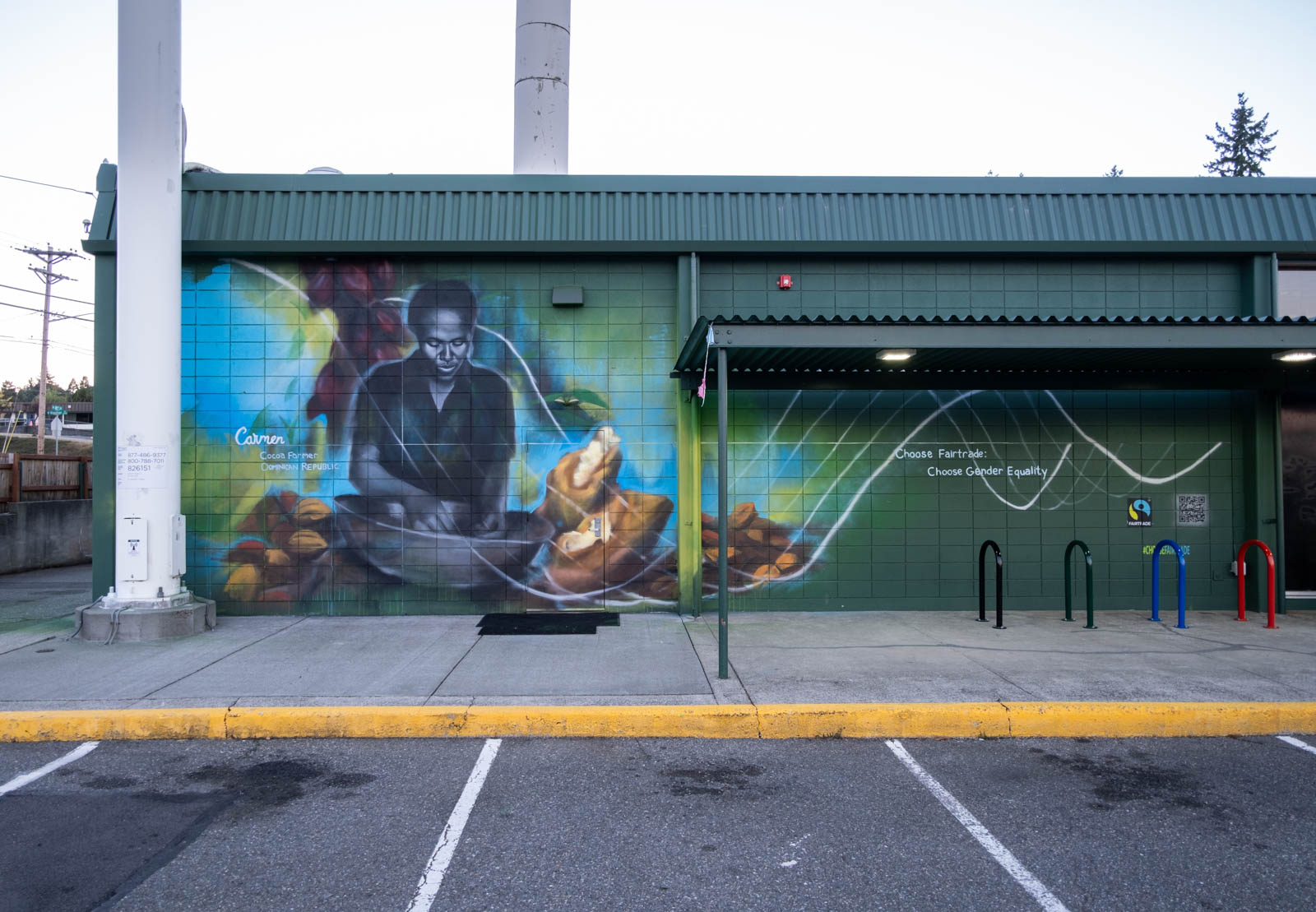 In Tacoma, Fairtrade America partnered with Central Co-op, a full-service grocery store that empowers its customers to make ethical choices when it comes to food purchases, to create a mural featuring a Fairtrade cocoa farmer. Local artist Mari Shibuya portrayed Carmen Mueses, a member of a Fairtrade certified cocoa cooperative, CONACADO, in the Dominican Republic.

Cocoa from CONACADO makes its way into a variety of Fairtrade certified items, including chocolate from Washington’s beloved local purveyor, Fran’s Chocolate. Carmen has demonstrated resilience and ingenuity to make a living from her cocoa crops, and even started a small business selling sweets and liqueurs made with her cocoa pods and coffee beans to diversify her income. Mari’s mural is inspired by the strength and determination of the female leaders in farming communities, like Carmen. 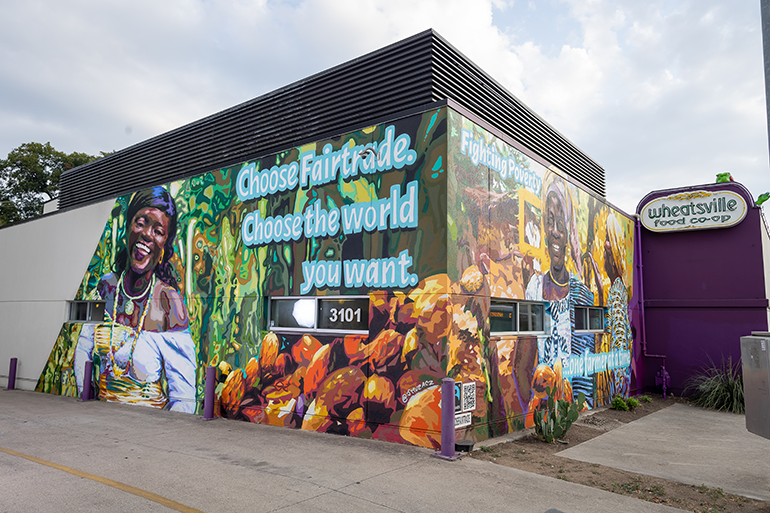 Sarah Larweh is a cocoa farmer and board member of her cooperative in Ghana where she works to address and resolve instances of child labor, an injustice that is rooted in poverty. A cocoa farmer in Côte d’Ivoire, Eugenie Lago leads a women’s association that helps members diversify their crops to increase profits and alleviate poverty within the community. Lastly, Assata Doumbia, cocoa farmer and president of her cocoa cooperative, has led her cooperative to become one of the top three in Côte d’Ivoire. Muzacz hopes the strength, humanity and drive of the farmers depicted inspires current and future generations to shop ethically and sustainably. 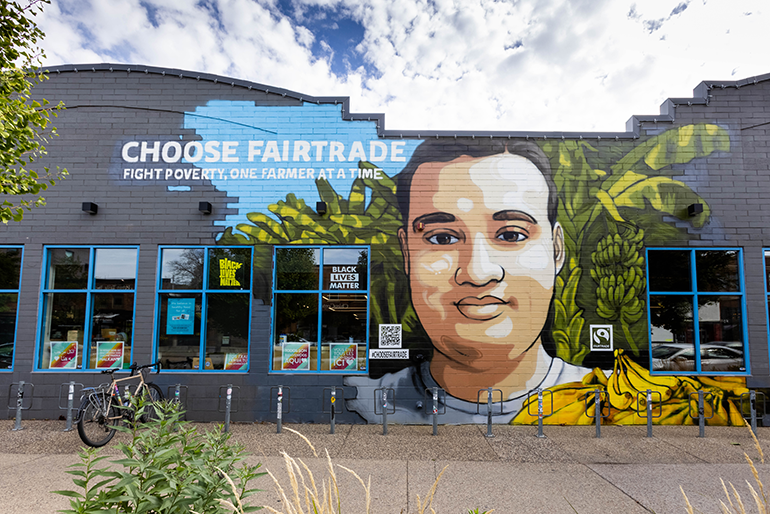 The Minneapolis mural is located at the Twin Cities Co-op Partners’ (TCCP) Wedge Co-op. TCCP was excited to partner with Fairtrade America because of their shared values, including supporting farmers and educating community members about the importance of equity for the people producing our food and sustainability for our planet. Local mural artist Reggie LeFlore captured Johnny Gabriel Navas Aquim, a 26 year-old, third-generation, small-scale banana farmer in Ecuador who has implemented aquaculture techniques to farm more sustainably.

Johnny is a proud member of the Fairtrade certified AsoGuabo Cooperative, a grassroots organization of banana farmers committed to improving their quality of life. Reggie is inspired by Johnny and his fellow farmers who work hard to take care of their communities. Bananas from AsoGuabo are sold, in part, through Equal Exchange, a key vendor partner of TCCP, once again taking the story from farm to store via these murals.

Fairtrade’s local retail partners donated wall space for the murals because of a shared passion for ensuring producers are paid fairly for their crops, as well as the other socioeconomic and environmental benefits of Fairtrade. During Fair Trade Month, each store will offer special promotions on Fairtrade certified goods, as well as host a variety of in-store and online events and giveaways. The acclaimed mural artists commissioned to create the murals are all committed to cause-based art.

Fairtrade partnered with National Co+op Grocers (NCG) food co-ops nationally to extend the reach of this campaign, including through the selection of the three retail partners where murals were installed this year. As part of this month-long campaign, NCG plans to celebrate the benefits of choosing Fairtrade in its consumer-facing channels, and more than 20 NCG co-ops across the U.S. plan to develop special promotions and merchandising of Fairtrade certified goods in their stores, further extending the reach of the Choose Fairtrade campaign.

Farming is the single largest employer in the world—two out of every five people farm. Purchasing goods with the Fairtrade America mark is an easy way to make a difference in the lives of people who grow our food. The "Choose Fairtrade. Choose the world you want." campaign highlights two of Fairtrade’s key areas of impact: fighting poverty and promoting gender equality. Fairtrade’s work also impacts ending child labor, combating climate change and supporting workers’ rights.

“Now, more than ever, we must listen to and raise the voices of the farmers and workers around the globe. As public art has inspired change for generations, we hope this year’s murals bring positive awareness to farmers and provides Americans a variety of reasons to choose goods at the store that support people and our planet,” shared Willingham.

Fairtrade America calls for information sharing up and down the supply chain
May 21, 2020