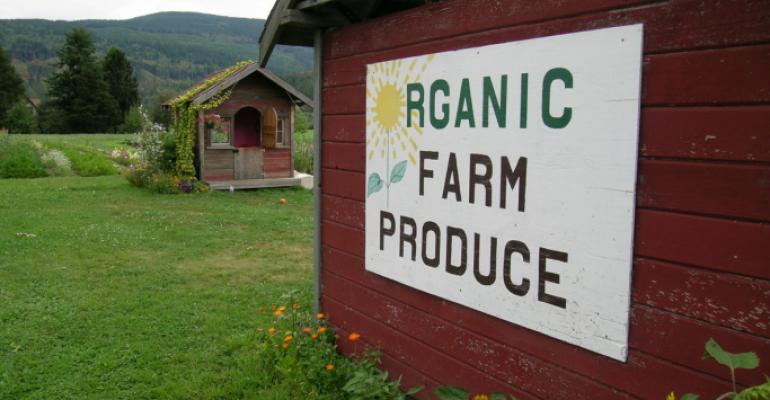 The Farm Bill&mdash;a nickname for the Food, Conservation, and Energy Act of 2008&mdash;may face serious cuts to local, organic programs this year. If big food corporations continue to rule the bill, what will happen to the future of organic?

It is not uncommon to question the relevancy of the Farm Bill, given that most U.S. citizens don't understand its meaning in their lives. It is a confusing set of appropriations, and it swings around like the Halley's Comet of federal bills (only once every five years).

Speakers at February's EcoFarm 2012 cut through the confusion with laser focus to reveal the importance of this legislation for the U.S. food supply. In essence, "the Farm Bill" is simply a nickname given to the Food, Conservation, & Energy Act, which establishes policies and benefits for 15 titles of everything from commodities to research.

For 10 years, the lion's share of the Farm Bill ($700 billion) has funded the Supplemental Nutrition Assistance Program (SNAP), previously known as "food stamps." Only $6 billion has funded organic agriculture and research, yet that small fraction of Farm Bill spending is constantly on the chopping block.

Gina Sims, of the Center for Nutrition and Activity Promotion, based in Chico, Calif., is quick to defend SNAP, which she says is not a welfare program. It provides food for more than 40 million people in the United States each month, and accounts for 67 percent of Farm Bill spending. However, SNAP is dependent on the farmers' ability to feed the hungry. In other words, it's a partnership, not a siphon.

At EcoFarm, Prolman listed wins for the organic community in the Farm Bill, such as establishing the Organic Research and Extension Initiative (OREI), organic conversion assistance and the organic cost share program. This cost share program is the closest thing to a subsidy for organic specialty crop growers, but make no mistake—it is nowhere close to a subsidy. (Note that "specialty crops" refers to any non-commodity crop otherwise referred to as "food crops.")

The current Farm Bill expires Sept. 30, 2012, and Congress likely will reauthorize it by Oct. 1. Prolman notes that because Congress is currently in a "budget-cutting frenzy" there are two notable programs in danger of extinction, not including the usual funding for organic research and assistance. The endangered acts are the "Local Farms, Food, and Jobs Act" (S.1773, H.R. 3286) and the "Beginning Farmer and Rancher Opportunities Act" (S.1850, H.R. 3236). Both exist to expand access to land for farmers, expand food access for consumers and to provide opportunities for rural communities. And both will greatly affect California farmers and residents in particular.

Sustainable, organic agriculture faces an uphill battle when it comes to getting noticed by Farm Bill policy makers. Kristin Lynch of Food and Water Watch points to "thirty years of bad food policy," which is designed to benefit giant food corporations and unchecked mergers (similar to the concentration of seed sales around the world). As a result, citizens suffer a lack of access to safe, healthy and affordable food even though our country over-produces commodity crops.

According to Lynch, a rise in production among large corporations creates a decrease in pay for farmers. Food growers are subject to exploitative contracts that force them to purchase the technology preferred by the big companies. This happened to the chicken farmers featured in Robert Kenner's film Food, Inc. Growers end up earning less than what they spend on operation costs, become socked in debt and are driven out of business. Because of what Lynch describes as "somewhat Draconian gag rules," these disenfranchised farmers cannot incite public discord toward the companies that drag them down.

This same problem is happening to dairy farmers today. In 1990, there were more than 200,000 dairy farmers in the United States. Now, there are less than 65,000. Consumers suffer as well. As a result of this type of concentration, food prices increase (dairy prices increased an average of 6.6 percent between 1980 and 1998). Farmer profits decrease dramatically and corporations soak up the profits. Lynch's solution is to enforce anti-trusts to stop companies from issuing secret contracts to factory farms, and to provide grants and loans to small businesses, particularly in low-income areas.

The common thread throughout the 2012 EcoFarm Conference was to support and establish local, organic agriculture and to enforce anti-trust laws (in seed, crop and animal production). We'll be seeing a greater thrust for supporting local/regional farms now that the USDA is throwing more weight behind their "Know Your Farmer, Know Your Food" initiative. Deputy Secretary Kathleen Merrigan will address this issue further at Natural Products Expo West in March, as will Mark Lipson, USDA's Organic and Sustainable Agriculture Policy Advisor.

Ultimately, if appropriations for organic operations are cut, new organic farms will decline. And if the cost share program is cut in particular, we’ll likely see many current certified organic farms lose their certification due to nonpayment.

Consequently, organic food manufacturers won’t have as much data on the organic supply chain/ingredients, and natural retailers won’t have accurate market research to stock these products. This affects the consumer in two ways: 1. There will be fewer organic choices in the marketplace and, 2. Prices will increase, possibly causing an exodus from organic.

What can industry do to ensure organic's future? Prolman urges everyone to ask their members of Congress to co-sponsor the Farm Bill. "While we know Farm Bill spending will be cut, we also know perseverance pays. And this is not a sprint, it's a marathon," she said.

What concerns you about the Farm Bill? Tell us in the comments.