Farm bill is now law, will 'unleash the full potential of hemp' 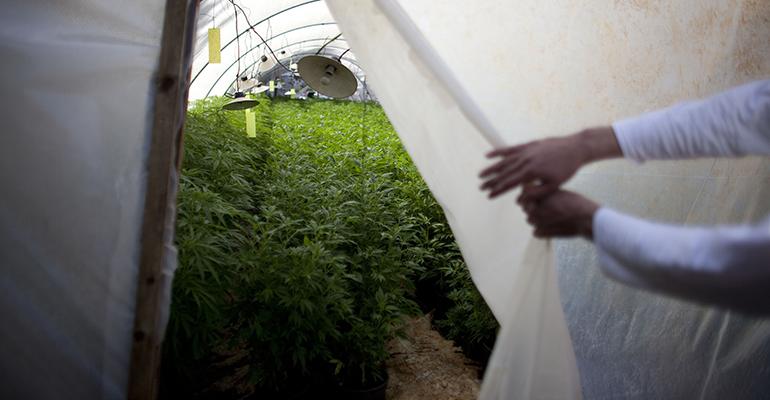 The soaring CBD market—including hemp farmers—is poised for greater growth in 2019. Is the exuberance irrational or justified?

Ask around, and there’s a palpable buzz in the air.

Already, there’s an estimated 750 brands in the hemp-derived CBD business, according to a market assessment by Colorado-based brand Functional Remedies.

The Farm Bill, which removes hemp from the Controlled Substances Act and thus takes the DEA out of the picture, is a bellwether event—akin to dropping the rope on the Oklahoma border in 1889 for all those sooners to grab their share of free land.

Even without the Farm Bill, CBD in 2018 grew by more than 80 percent, reaching an estimated $590 million, according to the Brightfield Group.

“This is a watershed moment for CBD in the United States,” said Bethany Gomez, director of research at the Brightfield Group, whose estimates of a $22 billion CBD market by 2022 represents the most optimistic projection of the category’s fortunes. “CBD [will] make its way to the shelves of larger scale, mainstream distribution channels and pave the way for the large mainstream consumer packaged goods companies in industries like drinks, beauty, pet, skin care and tobacco to develop CBD products and capitalize on this emerging industry.”

With the passage of the farm bill, there is a massive shift in the cultural landscape in America (coupled as it is with growing legal acceptance of marijuana across the land).

The hemp—and, let’s face it, CBD—market is expected to see seismic shifts in a number of different directions. These include federally regulated institutions and the capital flows that go with it, testing and quality standards and research. Most of all, it will free the plant from cultural bondage.

“Now that the realities of cannabis are coming to light, we will finally be able to unleash the full potential of hemp here in the U.S.,” said Derek Riedle, publisher of Civilized, a digital media company in the cannabis space. "What’s happening with the Farm Bill is exciting. Hemp is incredibly versatile, and for so long it’s had a bad reputation because of the stigma around marijuana. For decades, the government hasn’t been able to distinguish between the two plants—it’s like having a twin brother who breaks the rules but you get in trouble, too.”

It will also no doubt offer a boost to natural retailers—many of whom rely on supplements to push them into the black—who can now be just a little more confident of their stake in the game. They will not be getting knocks on their doors by the DEA, and not likely from local law enforcement officers, either. And there will likely be even greater numbers of consumers coming in to ask what's up with hemp and CBD.

"As part of the 2018 Farm Bill, the hemp provisions have cleared up a lot of confusion by naming it a legal agricultural commodity so it will no longer be mistaken for a controlled substance, like marijuana," said Joseph Dowling, CEO of CV Sciences, maker of PlusCBD Oil. "In addition to allowing farmers to grow hemp, the growth of the hemp-derived CBD industry will increase significantly, likely causing it to become the number one selling dietary supplement in the United States. The next step for the hemp CBD industry is that we need to self regulate CBD products to ensure they are safe, well tested, and properly labeled."

At first, there’s the hemp-derived CBD companies, in business maybe five years, with no reputation except what they’ve built as CBD companies. Leaders here are Charlotte’s Web, CV Sciences, Hemp Meds, Green Roads World, and Elixinol, according to Brightfield Group.

The second class is the fly-by-night “420” companies, the ganjapreneurs. They come to the table with a passion, with green thumbs, and with no real experience with how the dietary supplements business is regulated.

Last is the class of legacy dietary supplements companies. A handful of these companies have entered the CBD pitch this past year, including Barlean’s, Terry Naturally and Irwin Naturals.

And no small number of natural products industry veterans have already decided to take their talents and jump into the CBD pool.

“On January 1,” said Michael McGuffin, president of the American Herbal Products Association, “you’ll see old-line supplement companies introduce hemp and CBD. It’s an important step forward. We want some of those herb brands that we know make high-quality product to get out there and let consumers know there’s a high-quality product.”

The Drug Enforcement Administration no longer has any possible claim to interfere with the interstate commerce of hemp products—no small thing because many local law enforcement officials were using statements by the DEA as lending credence to crack down on CBD products.

“This should give comfort,” said Jonathan Miller, general counsel to the U.S. Hemp Roundtable, an advocacy group that focuses on Congress as well as state legislatures, “to federally regulated institutions—banks, merchant services, credit card companies, e-commerce sites and advertising platforms to conduct commerce with the hemp and hemp product industry.”

Because the DEA is removed from the picture, this should have a shift on local law enforcement agencies that have been shaking down retail outlets selling CBD, invariably using the DEA’s position on CBD (the agency has spoken out of both sides of its mouth on the issue) to justify a crackdown.

“There will still be the Barney Fifes [i.e., local law enforcement officials targeting local hemp retailers] but if you look at what we’ve been able to do, we’ve gone from 18 Barney Fife states to four or five of them,” said John Ryan, chief operating officer at Ananda Hemp.

The wild wild west, coupled with a whole lot of new growers taking up this new crop, will likely lead to quality hiccups throughout the value chain. Turns out hemp does not exactly grow like a weed.

"The future is bright as hemp solidifies itself as a legitimate agricultural product at long last—liberated from the restrictions of the Controlled Substances Act,” said Dylan Summers, director of government affairs and compliance at Lazarus Naturals, a hemp-derived CBD manufacturer based in Portland, Oregon. “Although challenges will arise as FDA navigates just how to regulate hemp products and hemp-derived cannabinoids, our endeavor will remain to pave the way for testing and quality standards throughout the industry.”

“Updated legislation and regulations on hemp and its constituents, primarily CBD and other non-psychoactive, non-THC cannabinoids, will lead to many positive developments,” said Alex Wasyl, CEO of Nexien Biopharma, which conducts R&D into cannabinoid-based pharmaceuticals. “Removing hemp, and potentially some of its phytocannabinoids themselves, from the Controlled Substances Act, will provide a clearer perspective to those currently on the sidelines of cannabinoid science. This will presumably hasten the timeline for the private sector and academic institutions to further contribute to developing valuable research. More research will enable targeted therapeutics for additional indications beyond existing cannabinoid pharmaceuticals to be developed and brought to market—most importantly, to patients in need.”

One of the big “pot stock” winners of 2018 is Canopy Growth, whose stock price doubled this year before the market-wide pullback at the end of this year.

One of the factors fueling Canopy Growth’s expansion has been an investment from Constellation Brands, which pumped billions into Canopy Growth earlier this year. This financial move should give the American drinks giant a way into the cannabis and hemp markets, including the production and sale of CBD-infused drinks.

“The Farm Bill removes uncertainty for producers, distributors, and marketers of cannabidiol (CBD) throughout the U.S.,” said Frank Lane, president of CFN Media, an agency and media network devoted to all things cannabis. “As the market is predicted to grow to $22 billion, businesses that had been waiting for more clarity—particularly those in the health and wellness space—will be free and emboldened to launch their products.”

We wish you a happy holidays and a prosperous new year

The new Farm Bill is certainly providing exuberance to the supplements industry, a surefire disruptive compound that more industries than just Big Pharma is probably at least a little concerned about. Is it irrational exuberance? Just another supplement craze, a la ephedra, omega-3s, probiotics or curcumin? Removing hemp from the Controlled Substances Act is certainly a landmark piece of legislation. The FDA, however, remains a wild card. And a gold rush market glut in products will likely shake out in 2019 as large supplement companies enter the space.

But this is not a story about kvetching. Not today. Today is the rare day when we will cheer something that President Trump signs.

Tomorrow we’ll talk about barriers to growth, health-food store challenges, disrupted industries from pharma to plastics to fuel, and whether the remaining regulatory agency—FDA—will get in the game, and to what extent.

“It is excellent to finally have definitive rules governing the sale of CBD products in the United States,” said Sasha Kadey, chief marketing officer of Greenlane, a distributor of cannabis products to head shops, smoke shops and dispensaries. “There are huge demands for these products as many Americans find great benefit in their use. A clear, legal path to bring these products to market with all the appropriate checks and balances that ultimately result in consumer safety is a huge win for consumers, law-abiding businesses and the U.S. economy.”

Hemp and CBD legalization reportedly will be in Farm Bill
Dec 05, 2018