The organic orange and grapefruit juice brand is returning to its roots.

Uncle Matt’s Organic, a leading brand of organic orange and grapefruit juices, was recently purchased by its original founder and CEO Matt McLean, who built and subsequently sold the company to Dean Foods in 2017. McLean, along with a team of successful industry investors, acquired the brand via a new parent company named Harmoni on April 30, 2020.

Dean Foods, which retained an Uncle Matt’s team that included McLean and his wife Susan after purchasing the brand, filed for bankruptcy in November 2019. This presented an opportunity for McLean to bid for the brand that he started.

“My initial feeling was that perhaps there's an opportunity here,” he says. “I had an interest in the brand and seeing that it had a good home. So, immediately, I was intrigued by the chance to buy it back.” 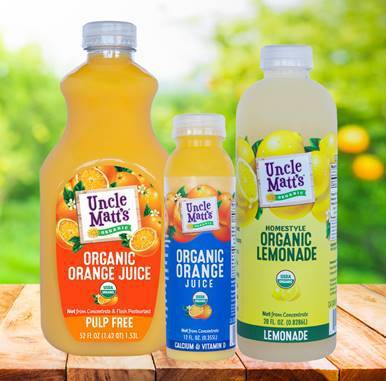 He formed Harmoni as a parent company, and brought on a team of investors that includes industry trailblazers Gary Hirschberg, John Foraker, Nicole and Peter Dawes and others.

“Potentially, Harmoni could be a vehicle for other brands that fit well with our vision and mission at Uncle Matt’s,” McLean says, “but we don’t have anything on the radar at the moment.”

Uncle Matt’s is currently busy rebuilding a leadership team and launching two new items: a no-sugar-added lemonade sweetened with stevia and erythritol and probiotic popsicles clocking in at just 30 to 35 calories per serving.

“We’ve added 1 billion probiotics per popsicle, and efficacy shows it supports the immune system, digestive system and protein absorption,” McLean says. “It’s also timely in the middle of a pandemic that we have a functional probiotic popsicle that’s a healthy treat.”

This homecoming has been a rare opportunity for McLean to expand distribution, innovate into new categories and educate consumers on the intrinsic health benefits of buying organic.

“This is probably the only time in my life I’ll get to reacquire a brand that I started and watched grow, and also join up with industry friends and a very successful team of entrepreneurs committed to the same organic mission I am,” he says.

Poll shows consumers value organic more than ever in pandemic
May 18, 2020