GNC delays loans' due date one month with hopes to refinance

Lenders implement strict oversight of GNC's spending, budget and liquidity in agreement that gives company another chance to avoid bankruptcy.

GNC Holdings Inc., a global health and wellness brand, has been able to extend by one month the springing maturity date on nearly $900 million debt that was due Saturday, the company announced Friday afternoon.

The lenders and the company agreed to extend the springing maturity date for the term loan facility, FILO credit facility and revolving credit facility until August 10 as long as GNC's liquidity is $100 million or more on June 15.

The company did not release the details of the agreement in its released statement, but they are available in a filing with the Securities and Exchange Commission.

If GNC's liquidity isn't $100 million or more on June 15 or any date thereafter, the loans will be due. Beginning that date, the company must submit to the lenders certification of its liquidity.

As of May 11, the company had $127 million in cash because it had borrowed $30 million on its revolving credit in April, Chief Financial Officer Trista Tolivar said during that day's Q1 earnings call.

Also, the holders of more than 25% of the debt could choose to trigger the June 15 date, and it would apply to the entire debt.

In agreeing to the extension of the springing maturity date, GNC is submitting to several additional conditions:

Under the terms of the company's Tranche B-2 term loan, FILO term loan and revolving credit facility, GNC needed to reduce its debt to $50 million or less by Saturday. During the May 11 conference call, CEO Ken Martindale and Tolivar both said the company was negotiating with lenders to extend the springing maturity date, as it would not be able to meet the $50 million target.

But GNC's continued operations are far from certain. Tolivar said May 11 that filing for Chapter 11 bankruptcy would be likely if the company can't refinance or restructure its debt.

The company reported a net loss of $220.1 million in the first quarter, which ended March 31.

GNC will continue its attempts to refinance and restructure its debts, according to the statement released Friday. 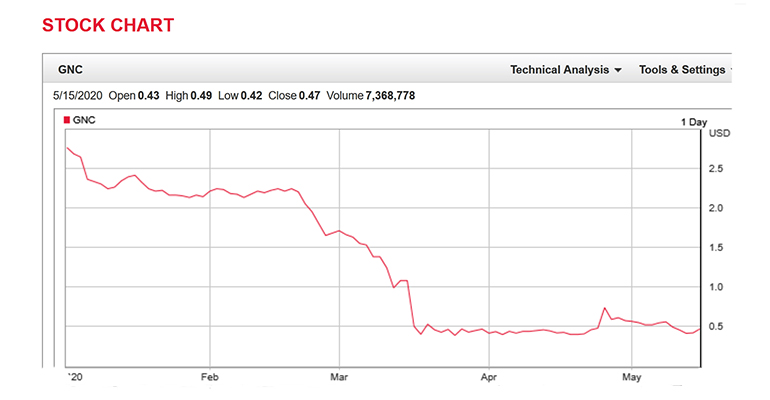 Sales at GNC's domestic stores have been falling since the second quarter of 2018, in part because the company has been closing unprofitable locations. But in early March, traffic and sales began to fall; the decreases exacerbated as the month continued and the coronavirus spread across the country.

Comparable-store sales dropped 10.1% during the quarter. The company estimates the pandemic caused about half of that decrease.

Stores also closed, either because of legal decree or because the company decided traffic was too low to keep some stores open, Martindale said. At the end of April, about 40% of GNC's domestic stores and 25% of its internationals stores were temporarily closed.

The ongoing financial struggles have put GNC's stock at risk of being delisted from the New York Stock Exchange. The NYSE notified GNC Holdings Inc in April that its stock, company valuation and stockholder equity are all below the Exchange's listing standards.

On April 21, GNC's average stock price was $0.56 and its market capitalization was about $47.3 million. At the end of fiscal 2019, its stakeholders' equity was negative $207.3 million, which shows that its liabilities exceed its assets.

GNC continues to look for refinancing options after effort in Asia fails
Mar 25, 2020