HomeNewsJohn Kerry optimistic on global fight against climate change
Recent
Latest
Podcast: What brands need to get on shelf at Fresh Thyme Market
May 24, 2022
Natural Habitats releases Palm Positive+, A Reference Guide
May 24, 2022
The Planting Hope Company aims to prove gender equity leads to success
May 23, 2022
4 tips to get ahead of chemical concerns in packaging
May 20, 2022
Trending
Whole Foods' honors 30 companies with 10th annual Supplier Awards
May 18, 2022
Getting ready for 2023: Trends for brands to consider
May 17, 2022
6 tips to promote consumer understanding of Certified Organic
May 18, 2022
Natural beauty market trends
Jun 16, 2021 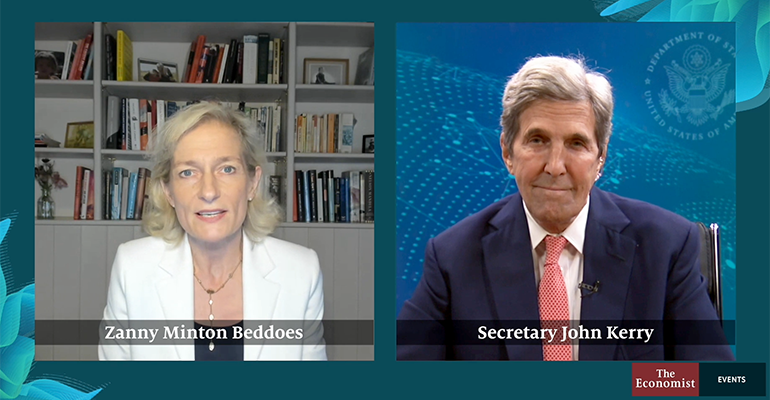 Five months before world leaders meet to speed up their reductions in greenhouse gas emissions, the president's climate envoy speaks with The Economist.

This year is shaping up to be critical in the fight against climate change—and not a minute too soon.

Since President Joe Biden was sworn in on Jan. 20, he has made several moves to emphasize the importance of mitigating global warming and reinstating the country's role as a leader in that battle:

In 2019, China's greenhouse gas emissions—27% of the total—surpassed more than the emission of the United States and the entire developed world combined, the Rhodium Group announced. The United States' emissions accounted for 11% of the total; India was third with 6.6%. The 27 countries that make up the European Union contributed 6.4%, according to the research group's report.

The goal of the Paris Agreement was to hold global warming to less than 2 degrees Celsius—ideally, 1.5 C—by 2050. But so little has been done since 2015, global emissions must be reduced by half by 2030 to reach the 1.5 C goal, COP26 President-Designate Alok Sharma said in speech on May 14.

Recently, Kerry sat down for an interview with Zanny Minton Beddoes, chief editor of The Economist, during the magazine's Sustainability Week, a week of interviews and discussions on the economy, renewable energy, climate change and new technologies. We compiled the highlights, which are edited for length and clarity.

Beddoes: I want to start with this notion of U.S. leadership and whether the U.S. can really be relied upon to lead global charge on climate change. How can you convince the rest of the world that U.S. leadership is credible, is here to stay?

Kerry: The reason the leadership is credible is because we're going to have such a massive movement in the economy, globally, with the amount of money that is being invested, and the administrative changes that the president is able to put in place without the need to have congressional approval. There's going to be a momentum created out of that, that is going to keep the United States moving in this direction.

You couldn't build a coal-fired power plant United States today if you wanted to, because no bank will fund it. And now the major banks of America, together with some of our asset management companies have all articulated with clarity, with pledges, the amount of money they will be investing in climate-related activity over the next 10 years—about $4.16 trillion—so I don't think any politician can change what the world is going to move towards over the course of these next months.

Beddoes: The signal to the rest of the world of Congress passing—or more negatively failing—the climate element of the infrastructure legislation would be very big. Do you think it will be passed?

Kerry: I believe that the Congress is going to pass the critical components of an infrastructure bill, which is essential to be able to move forward in dealing with the challenges we face.

President Biden has made a pledge that by 2035, all of our power in the United States will be produced carbon-free. The utilities themselves are embracing that notion and they're moving in that direction. Moreover, Congress has already passed some critical elements. I'm convinced they will continue to embrace sensible legislation for our country.

Beddoes: Will it not, however, be a big dent to U.S. credibility as a leader in this if you don't get meaningful passage? Yes, people want this, but many Republicans don't want the president to have a great victory. There is a domestic political uncertainty here.

Kerry: This is not dependent exclusively on the Congress. It is going to happen because there are rulemakings that will take place with the Environmental Protection Agency; the Energy Department under Jennifer Granholm's abled leadership is already moving to embrace new technologies, which are being funded. The private sector itself is embracing that.

Governments can delay it by a little bit. Governments can get in the way. But those are governments that are going to be left behind, because there's so much happening at the grassroots level, at the subnational level, at the international level. Leaders—real leaders—in most countries are looking at this and say themselves, "You know what? This is jobs. This is economic development. This is international leadership. This is health and safety for my citizens. This is, frankly, the security of our nation."

This is the largest market that the world has ever known, literally. It's 4.5 [billion], 5 billion users today. It's going to go up to 9 billion users by 2050. We're going to see massive amounts of new technology and job-creating opportunities coming online.

Beddoes: The simplest way to get a market signal across the economy is to put a price on carbon. Yet, there is nothing in the administration's proposals about putting a price on carbon or for having a carbon tax. Is that something that is just so politically unpalatable you can't go there?

Kerry: President Biden has instructed us to look very, very carefully at the border adjustment mechanism, which is a pricing of carbon that would take place nation to nation, depending on the products that are being sent. For instance, if you're in a coal-dependent country and you're making dirty products that come from that coal, because you haven't made the investments and moved in the direction to get into the renewables and the alternatives and sustainable energy, then you could wind up paying a price.

There is a lot of discussion going on about carbon pricing on a broad basis. The president hasn't yet made a decision regarding that; it's not on the table at this moment in time. So this is not something people are ignoring, but I don't think there is yet a consensus about exactly how to make it happen in a way that is sensible and fair on a global basis.

Beddoes: By many measures, the relationship between the United States and China are pretty terrible and have not improved under the new administration. How have you been able to make progress with the Chinese, given the difficulties across the broader relationship?

Kerry: China is a smart country, led by people who look very carefully at these issues, and they understand it doesn't really do anybody any good to be adamant about one issue or another while you're on a suicide pact to destroy the planet. What good does that do to anybody? It just doesn't make sense.

Of course (climate change) has to be a separate track. Some of those other issues will take longer to work through. They don't demand the same immediacy, in some ways, with the same kind of broad impact on a global basis that the climate crisis does. If we were to sit there and say, "Well I'm going to fight over this issue that's a trade issue or a cyber issue," and we're going to fight about that while the world is falling apart, you'd really be certifiable. I don't think that any of us want to fit in that category.

Beddoes: What do you concretely expect from the (COP26 global leaders meeting) in November? What is the definition of success for you there?

Kerry: Success is getting a critical mass of countries moving forward to hold to the 1.5 C, setting targets that are realistic in the next 10 years. That's the critical period of time. If we don't reduce emissions enough, as a planet, between 2020 and 2030, we make holding 1.5 C impossible. And we also make achieving the net zero by 2050 impossible.

The scientists have told us, "If you want to avoid the worst consequences of the climate crisis, you must use the next 10 years to reduce your emissions sufficiently that you hold the temperature down." We have five months until we go to Glasgow. I hope countries will reevaluate where they are, think about what they could do. And we're going to do hard diplomacy during the course of those five months, working with countries in order to get where we need to go.

For more about the climate change crisis, see:

Biden and G7 announce progress on climate change with one major failure (June 13, 2021)

Why regenerative agriculture must be measured (April 5, 2021)