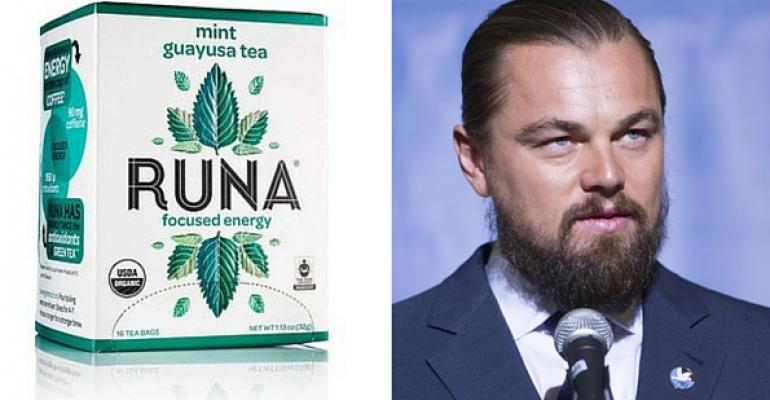 The Revenant actor gets serious about supporting responsible business.

The socially and environmentally responsible energy beverage brand Runa already has the support of Hollywood A-Lister Channing Tatum. Now, the company can check off another celebrity who believes in Runa’s clean formulation and approach to improving the lives of people who reside and work in the Amazon: Environmentalist and Oscar-winning actor Leonardo DiCaprio.

Runa announced today that DiCaprio, who in addition to acting is a noted and involved crusader against climate change, invested in the company and is donating all of his shares to the indigenous farmers who harvest Runa’s key ingredient, guayusa, cousin to yerba mate, a caffeinated plant native to Ecuador. “I am so proud to join with Runa in supporting the indigenous people of the Amazon,” said DiCaprio in a statement. “The future of these communities, and many like them across the world, are at risk as their native lands are exploited for natural resource and agricultural development. Sustainable farming practices are key to helping ensure a brighter future for so many local people.”

DiCaprio has past invested in entities that move the dial on sustainability. Recently, he pledged to divest from companies that exploit fossil fuels and invest instead in clean-energy businesses, and in 1998 he founded the Leonardo DiCaprio Foundation, which supports “innovative projects that protect vulnerable wildlife from extinction, while restoring balance to threatened ecosystems and communities,” according to the mission statement. To his knowledge, Runa CEO and co-founder Tyler Gage says that Runa is the first natural beverage brand DiCaprio has invested in.

Runa is unique in that the company launched in tandem with a nonprofit half, The Runa Foundation, which focuses on improving value chains, income sources, education programs, forest management planning and more. The autonomous organization (it does not receive funding from Runa) also works with indigenous groups to document and research Amazonian medicinal plants to explore potential new products that provide economic incentive to protect the forest. To date, the Runa Foundation has helped farmer co-ops invest more than $70,000 in community projects, train more than 650 farmers on sustainable guayusa farming and plant almost 1 million native trees in the Amazon rain forest.

This is clearly outstanding work.

But DiCaprio’s investment adds another layer of continuing stability for Ecuadorian communities. “Leonardo is putting equity ownership in Runa,” says Gage. “As Runa grows and creates more value, this is an endowment for the [farming] communities to create long-term economic growth.”

Leaders of indigenous groups receiving the shares, agree. According to Jorge Gabriel Furagaro Kuetgaje, general coordinator of COICA, a cooperative that connects more than 400 indigenous groups across the Amazon, this investment can help farmers monetize crops sustainably grown in rainforest regions (rather than lumber). “COICA wants to celebrate the new relationship with Runa, scale it and seeks to foster similar types of relationships between progressive business and indigenous peoples to commercialize their products,” he says.