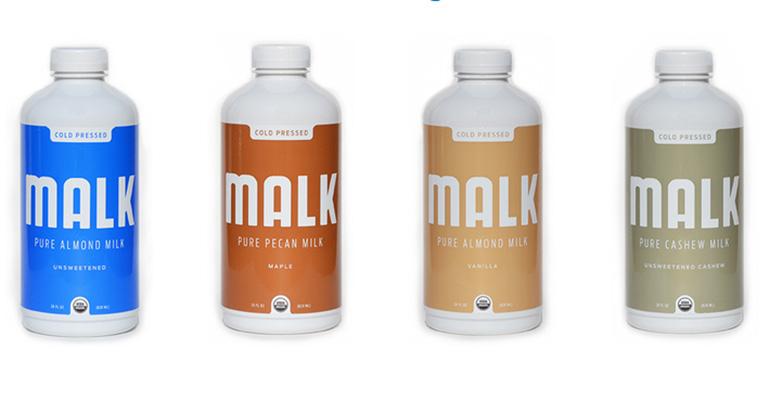 This plant-based milk brand with a memorable name and bold packaging has just expanded nationally and has new products on the horizon.

Organic nut milk brand MALK Organics announced last month that it was rolling out three of its products in more than 1,200 Kroger stores around the country. It just wrapped up its first solid week of sales with the national retailer, and the expansion has already made a huge impact on the its reach and growth. "Our outreach has expanded quite a bit overnight. We’ve gone from being in nine states to now 33," said cofounder and CEO August Vega. "Going from 340 stores to over 1,500 stores, it makes up a large portion of our revenue at this point."

The brand specializes in organic nut milks that are made without binders, fillers, thickeners or preservatives, and instead of pasteurization use high-pressure processing, or HPP, the process that has become so popular in the bottled juice market. Kroger now carries MALK’s three original signature products: unsweetened almondmilk, which is the brand’s bestselling product (not a surprise, considering unsweetened sells best category-wide), vanilla almondmilk and pecanmilk.

The products retail for $6.99. That’s higher than the price point of a lot of competitors, but Vega said that’s a result of the clean product they offer: organic ingredients and more expensive processing. She said the company also pays its employees double the minimum wage. "If you’re really a health conscious person and you want a clean product," she said, "there are some staples that you should invest in."

Vega said it's too early to say if MALK sales in Kroger are taking marketshare from other alternative milk brands, or if it is attracting consumers who traditionally turn to dairy milk and are intrigued by MALK's offerings. So far, the unsweetened almondmilk and the pecanmilk have been selling well. "What’s unique is the pecan milk, that will catch people’s eye, especially as we creep into the fall season," she said. "It gives them a sense of holiday, or of celebrating fall."

MALK is also working on new products, meanwhile, over at Whole Foods Market. The natural foods retail leader will have an exclusive to sell MALK's nog starting in late October through the holiday season, as well as a 28-ounce version of its existing pecanmilk cold brew coffee beverage; and will also get a "first look" at a new cashew-matcha blend. MALK is currently in three Whole Foods regions, with efforts underway to expand to new regions.

Which milk alternatives do consumers prefer? [Infographic]
May 13, 2015