Naturade makes a splash in Costco 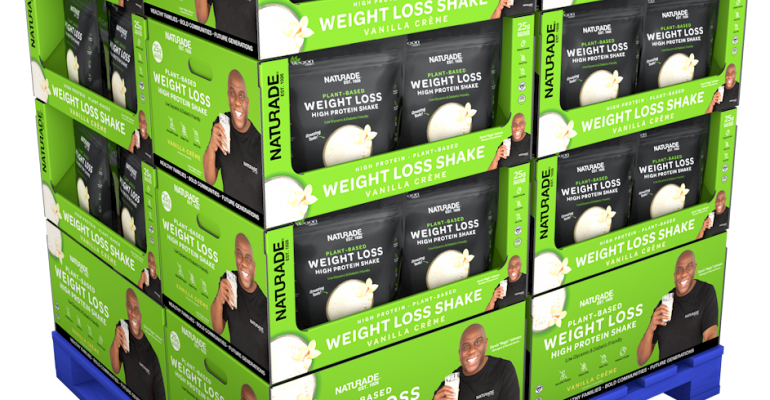 The Black-owned, "hot, sexy, cool" natural brand has had to undergo the indignities of systemic racism over the past eight years, but now it's riding the #BLM cultural moment with a quality plant-based product.

Kareem Cook and Claude Tellis were classmates at Duke University. On the business track. Black.

They also had family members who suffered and even died from diabetes. And so a mission was born: to address diabetes and diet-related illness on a national scale.

Back in the 1990s, the pair started a healthy vending-machine company and led a movement in Los Angeles to switch out junk food in schools with healthy products.

Tellis said that, in Louisiana—infamous for being among the unhealthiest states in the country—people just do not link diet with health outcomes.

“We said, ‘Let’s raise some money. Let’s buy a company,’” said Cook. “We saw Naturade, which pioneered plant-based shakes in this country. We bought it and reimagined the company to address the issues that were most important to us.”

That was in 2012, and Naturade was originally founded in 1926. It's a true legacy company.

In 2021, five years shy of a century from its founding—after a near-decade trying to navigate natural products retailers, Amazon, engage with the Black community that really needs help with diabetes and obesity, and trying to get into any other stores that would take them—Cook and Tellis landed their biggest account yet: big-box retailer Costco.

“As far as we know,” said Tellis, “we’re the first Black-owned company to get into Costco. Definitely to get into our section in Costco. Kudos to Costco for taking a shot.”

Their journey, they say, is different from other brands. And its source is the uneasy cultural moment that was laid bare in 2020—elements of systemic racism that are all too often lost on or overlooked by white America.

The natural products industry is full of mission-driven startups. The values-forward look of the entire enterprise differentiates this category of consumer goods versus any other. Yet even while leading with heart, every company has brass-tacks challenges around raising startup capital, getting in retail outlets, and guaranteeing contracts with retailers around maintaining sales.

Naturade was no different, especially regarding the issue of attracting the capital needed to take the brand to the next level. Tellis laments the apparent lack of leadership among private equity firms in taking on Black-owned companies.

“It’s not just that first check,” he said. “It’s that second check and that third check.”

It was always a challenge to do anything other than just take whatever profits they were getting from sales and plow them back into the company. Attracting private equity to supercharge the retail sales success was a series of "shoulda coulda wouldas."

"As many private equity firms as there are," said Tellis, "there really have been a number of people who take meetings and hung around the hoop, but very little leadership in terms of taking on Black-owned companies."

And then they faced a situation that a white company would never have had to contend with. A few years ago their company president recommended they apply for Minority Business Enterprise (MBE) certification, which informs the market that a company is Black-owned, in their case. It took a lot of back-and-forth deliberations. Would it matter in the market? Would it be better to just put their heads down and compete via the product's benefits, marketing and their collective business acumen? After all, they were satisfied that they were finding success because of the simple product's benefits, its taste and vibe. In the end, though, they decided to go ahead and get the MBE certification. Why not?

“And then we got dropped by our biggest customer because there was a buyer there who told someone he didn’t believe in affirmative action,” said Cook, who noted that Naturade had been in the store since 2008, long before Cook and Tellis purchased the company. “Unfortunately, sometimes that’s the reality of this country and sometimes doing business in this country. That was a big blow to the company. That was a gut check. And then we had to deal with it.”

That meant cutting operating expenses by 25%. It meant rethinking the company.

The executive team was comprised of Tellis and Cook, along with veteran natural products marketer Shannon Charles and chief financial officer Catherine Zhang, a sharp operator with a Wharton MBA to her credit.

Charles had been part of two significant buyout deals in the natural products business—NeoCell, a leading collagen company, was acquired in 2017 by WellNext, a portfolio company that also acquired Rainbow Light and a handful of other supplement category leaders. Charles then helped WellNext as it rebranded as NutraNext and repackaged the portfolio, which led to the acquisition by CPG giant Clorox in 2018. Charles—known as Miss Mayor of Natural in some industry quarters—provided the veteran natural products savvy that helped with the new product positioning Naturade thought was now needed.

The team decided to shift their marketing plan to focus on the natural channel.

Getting back to their vision and mission—a great-tasting product that helps people address diabetes and lose weight—proved to be the coin of the realm.

Another bold move was to reach out to former basketball stars Grant Hill—it surely helped that Hill, too, was a Duke University alum—and hoops legend Magic Johnson.

In his life after basketball, Magic Johnson has turned to the business world to assist Black businesses in much the same way he earned his legend on the court as one of only five players in the history of the NBA to have more than 10,000 career assists.

“Having Magic has been amazing,” said Tellis. “He’s raised private equity funds. He sees our business as a way to push for healthy outcomes in our community.”

That star power, coupled with an ongoing five-year dalliance with Costco, finally bore fruit—likely helped along by the 2020 Black Lives Matter movement that has awakened society’s eyes to the travails Blacks and Black-owned companies face every day.

In the latter half of 2020, Naturade has found traction in Whole Foods Market, in Target and now in Costco.

On Feb. 3, Magic will appear on the Jimmy Kimmel show where Tellis says he will talk up the Naturade brand.

The SKU that Naturade is bringing into Costco has Magic Johnson on the box, which contains the company’s Plant-Based Weight Loss High Protein Shake. Two scoops make up a serving, which supplies 25 grams of non-GMO plant protein (pea, potato, chlorella, chia, quinoa), six grams of fiber, 21 vitamins and minerals and is vegan, gluten-free, soy-free and dairy-free. It contains two branded ingredients, Super Citrimax for appetite control and ChromeMate for control over bloody sugar. 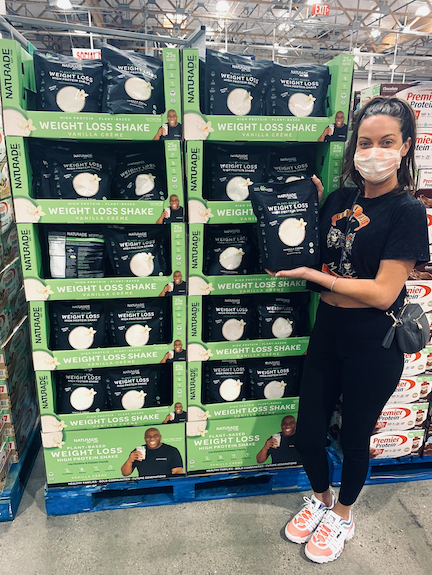 Also on Feb. 3, Tellis and Cook will have the opportunity to pitch the NFL Players Association on addressing weight management and diabetes.

“We turned it around in 2020,” said Cook. “All of a sudden people were leaning into and recognizing the disparities of opportunity of Black-owned companies, and it was able to benefit us.”

Cook asserts that Naturade did not get distribution just by virtue of being a Black-owned company.

“We got distribution because we actually had products that were proven to beat the best products out there when we were head-to-head in different outlets,” he said. “And people were open to trying to level the playing field.”

Any company would be giddy to consider the sales opportunities that getting into big-box retailers could provide. Cook says that after only four days in 40 Costco stores across 13 states and Washington, D.C., the company is at 85% of its weekly sales goal. The company is looking forward to reaching new consumers.

“There’s a huge opportunity gap for us,” said Tellis. “There’s the natural health-food brand, and then there’s the tried-and-true diabetic brand. There’s not that hot, sexy, cool brand in the middle that’s going to hit your 33- to 55-year-old diabetic that’s not your mom and not a tree hugger but someone in the middle. We think there’s more people like that than the other extremes.”

So it’s all coming together for Naturade, and Cook and Trellis are feeling the love. They are hoping to build off the unity that comes with fellowship and brotherhood—of a country coming together to hear the cries of disparities of justice that have been sitting on the Black community for far too long.

“We think people are already showing up for us, for the vision and mission—a product that tastes good, that’s clean, that’s plant-based, and can help you get your insulin under control and lose weight,” said Tellis. “No matter who you are or your politics, let’s have some fun again. Our goal is to bring our brand story, bring the flavor of a Black-owned company, bring it all into the industry in a fun and cool and inviting way with a dope product. And we think we’ve got that. We hope people pick up the product, enjoy the product, and support what we’re all about.”