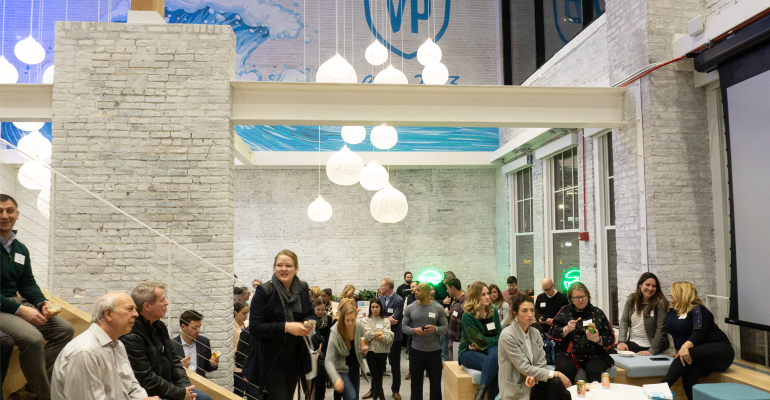 Naturally Chicago drew 250 people to its first big event of 2020, a Winter Wellness Party on Jan. 30 at Vital Proteins’ beautiful offices in Chicago’s Fulton Market District. And when you can get that many people to come out on a mid-winter night in Chicago, you must be doing something right.

The turnout was undoubtedly a combination of factors. One was the on-trend wellness theme. This made the setting apropos, as Vital Proteins’ collagen-based food products have produced exponential growth since its founding just seven years ago.

Related: Good food brand leaders explain why Chicago is their kind of town

Most of the food served at the party was plant-based, with much of it provided by national brands such as Beyond Meat, Simple Mills and Lifeway, as well as rising-star local companies such as Kitchfix (catering) and Sacred Serve (plant-based gelato), both graduates of FamilyFarmed’s Good Food Accelerator (GFA). Soup Explorers (soup kits with international flavors) is a member of GFA’s new entrepreneur cohort, which starts its six-month intensive curriculum in late February.

Naturally Chicago helped ensure a crowd by offering free admission to anyone who signed up for a one-year membership between Jan. 1 and Jan. 30. This promotion succeeded beyond expectations with 89 new registrants, increasing by a third the membership rolls for the program that launched just nine months earlier (in April 2019).

The engagement among the attendees underscored the purpose of Naturally Chicago, which is providing a much-needed year-round platform for networking, collaboration, entrepreneurship and socializing for the city’s big but diffuse natural products sector.

“The buzz in the room was just amazing,” said Jim Slama, founder and CEO of FamilyFarmed. The Chicago non-profit runs Naturally Chicago with input from its co-founders—Brandon Barnholt of KeHE Distributors, Tony Olson of SPINS and Bill Weiland of Presence Marketing—and a 32-member board of directors.

Slama continued, “We just know that many new business relationships—and friendships—were forged during the Wellness Party.”

It is also likely that some attendees were drawn by the opportunity to experience Vital Proteins’ space. The company’s rapid rise under CEO Kurt Seidensticker enabled it to rehab a former chicken processing plant in Chicago’s meatpacking district into a showplace cited by Inc. magazine in 2019 as one of the 10 coolest new workspaces in the world.

Tracey Halama, Vital Proteins’ vice president of sales, provided background on the company’s success story in her talk at Naturally Chicago’s Friday Morning Mingle on Jan. 24, six days before the Wellness Party. (Read a full recap in a naturallychicago.com story titled, “You Too Can Be a $100 Million Brand.”)

Halama described how Seidensticker was concerned that his workout recovery times were getting longer and sought a solution. After a series of discussions with his daughter, then attending medical school, Seidensticker determined that the solution was collagen, an animal protein (Vital Proteins uses collagen derived from cows) touted for its benefits to joint health, skin, hair and nails.

These multiple applications led to the placement of Vital Proteins’ products in both the wellness and beauty aisles of stores, where they thrived. “It was important for us to have different points around the perimeter and get to be more of a lifestyle brand, where you weren’t thinking about Vital Proteins as a protein powder company, but rather Vital Proteins as a lifestyle company,” Halama said.

The company also quickly showed the ability to pivot when necessary. First came repackaging: “Our first branding looks very different than our branding today…” Halama said. “It was that bad.”

“We’ve had double-digit growth year on year since inception. In 2018, we ended the year at $105 million, 2019 we ended the year at $180 million from a top-line revenue perspective,” Halama said. “We can’t [continue to] grow at that pace by selling more blue [label] collagen peptides … Part of our strategy is if they’re coming in and copying our existing innovation, then we have to out-innovate them.”

Naturally Chicago can’t predict Vital Proteins’ growth rate for 2020, but we are certain that they will be valuable partners on the Chicago good food scene for years to come.

And don’t be surprised if you see a Save the Date for a 2021 Winter Wellness Party before long.

State of growth: SPINS report on natural industry to be featured by Naturally Chicago
Sep 19, 2019