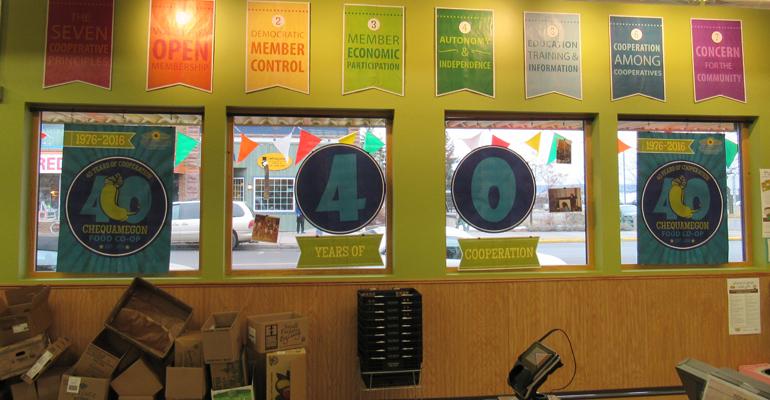 Retailer of the Year: Innovation finalist

Originally a buying club for residents living along Lake Superior’s Chequamegon Bay in northern Wisconsin, Chequamegon Food Co-op officially incorporated in the town of Ashland in 1976. The store has moved six times since, finally settling into a 6,000-square-foot location in 2014. Along with a hearty bulk selection, healthy produce and a sense of community, local products consistently attract shoppers. According to recent member surveys, access to locally sourced goods is a main reason why many frequent the co-op. In 2015 alone, the store sold $517,844.07 in local products—12.4 percent of its total sales—all sourced from more than 80 area farmers, producers and merchandisers.

Strengthening local systems. For the past eight years, Chequamegon Food Co-op has awarded no-interest microloans to area farmers and producers in an attempt to strengthen the local food infrastructure in northern Wisconsin. Loans reach $5,000, and the co-op awarded $34,000 total between the 2015 spring and fall award cycles. This year’s spring season yielded $15,000 in loans.

Engaging the community. As part of the co-op’s CHIP for Change program, all shoppers are asked to round up their purchases to the nearest dollar, which helps fund the microloans. In 2015, Chequamegon Food Co-op collected nearly $21,000 in CHIP funds, all of which was loaned along with $13,000 in repaid loan payments and some of the store’s own funds.

Pledging for the future. In 2013, Chequamegon Food Co-op signed the Superior Compact, a pledge to purchase 20 percent of products locally by 2020. To meet this goal, the store developed Produce Promises, a purchasing agreement that enlists local farmers in pledging a certain amount and type of produce to the co-op.