The Hain Celestial Group reported on Thursday that its net sales dropped to $560.8 million, a 4.8 percent decrease from the first quarter of 2018.

The company also saw a net loss for the quarter of $23.1 million, compared with income of $18.6 million in the same period last year. The fourth quarter of fiscal 2018 resulted in a $4.6 million loss, but the company ended the year with net income of $82.4 million.

In the United States, net sales decreased 7.5 percent to $244 million for the first quarter, which ended Sept. 30.

Mark Schiller, who started as Hain’s CEO on Monday, said his experience at Pinnacle Foods would serve him well as he tries to turn around Hain Celestial.

“While our portfolio at Hain competes in more on-trend categories with better growth prospects, we have a similar need to reinvigorate and differentiate our brands with world-class marketing and innovation,” Schiller said during Thursday’s earnings call. “We need to manage complexity and drive out costs. We need to expand our distribution, deliver smart pricing, and improve efficiency.

“In short, I've faced these challenges before and have successfully help lead transformation and operational improvements in these areas.”

First quarter results for the company were universally down:

In the U.S., sales were not the company’s only disappointing result: 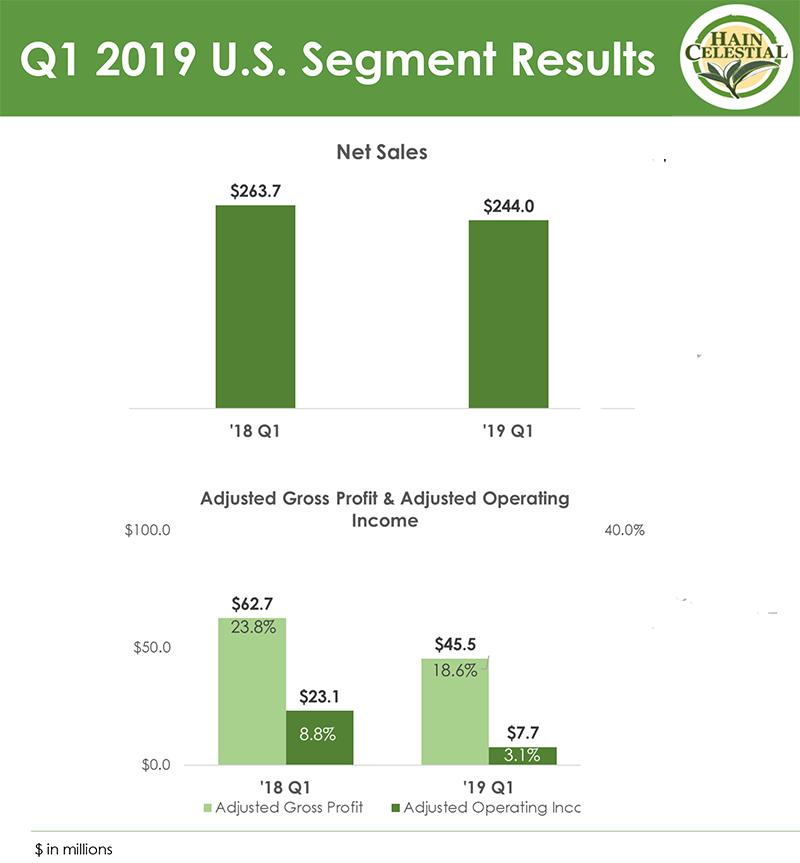 Chief Financial Officer James Langrock said U.S. net sales, when adjusted for issues such as acquisitions and SKU rationalization, dropped 4 percent. The adjusted gross margin for the country was 18.6 percent, a 5.2 percent decrease.

Results from other areas weren't much better:

Langrock said Thursday that the company expected a slow start to fiscal 2019 because of distribution gains and promotions that are planned for later in the year. He expects gross margin to improve in the second quarter and continue to grow through the fiscal year, he said.

Distribution and sales expected to expand in U.S.

Unexpected, though, were increased demand in the Personal Care business and supply problems, both of which affected sales, said Gary Tickle, chief executive officer of Hain Celestial North America.

The Personal Care problem was related to one specific co-packer, Tickle said. The problem has been solved, however, and he expects supply levels to return to about 90 percent of normal by the end of the second quarter. Personal Care is one of the company’s higher-margin categories, he said.

“It was quite a unique set of circumstances related to that co-manufacturer and, ultimately, created very short-term acute issues for us,” he said. Near the end of fiscal 2019, Hain Celestial will increase at its own plant the capacity to manufacture personal care items.

The company’s ongoing SKU rationalization—the company’s effort to rid itself of low-margin, poorly selling products to focus on its top 11 brands—reduced U.S. sales by $9.7 million, which was expected, he said.

Tickle also announced that the company has “regained significant expanded distribution” of Sensible Portion—a snack line dropped by a “mass customer” in the second quarter of fiscal 2018—in a “key mass retailer.” A new item will have front-of-store presence in more than1,400 stores beginning in December. In January 2019, new Sensible Portions products will be shipping to more than 4,400 stores.

“We remain confident, based on the line-of-sight we have on distribution gains, the additional innovation coming to the market, and new innovation in the areas of our business. We expect to continue to build momentum in our core 11 brands,” Tickle said.

As Schiller is new to the company, he said he expects to assess Hain’s situation and strategy over the next 90 days. He expects to report his findings and clarify the company’s plans in February. He offered some initial insight, though, noting that the company needs to focus its resources on areas, both brands and geographic, that will provide the greatest returns.

Hain Celestial also needs to work on keeping its top brands relevant and meeting consumers’ needs, he said. “There will be will emphasis on resurrecting and continuing to support places where we have robust growth on the top line.” Lastly, spending needs to be managed efficiently, which will require looking at processes, resources and capabilities.

“I'm going to assess all of those things and how we've allocated resources, where we're focusing our energies and make sure that we've got the right strategy to deliver consistent performance,” Schiller said.