HomeNewsInvestmentNutrition, health and wellness industry sees record upswing in transactions in 2015
Recent
Latest
Sponsored Content
The goodness wrapped in a certified organic seal – video
Podcast: What brands need to get on shelf at Fresh Thyme Market
May 24, 2022
Natural Habitats releases Palm Positive+, A Reference Guide
May 24, 2022
The Planting Hope Company aims to prove gender equity leads to success
May 23, 2022
Trending
Whole Foods' honors 30 companies with 10th annual Supplier Awards
May 18, 2022
Getting ready for 2023: Trends for brands to consider
May 17, 2022
6 tips to promote consumer understanding of Certified Organic
May 18, 2022
Natural beauty market trends
Jun 16, 2021 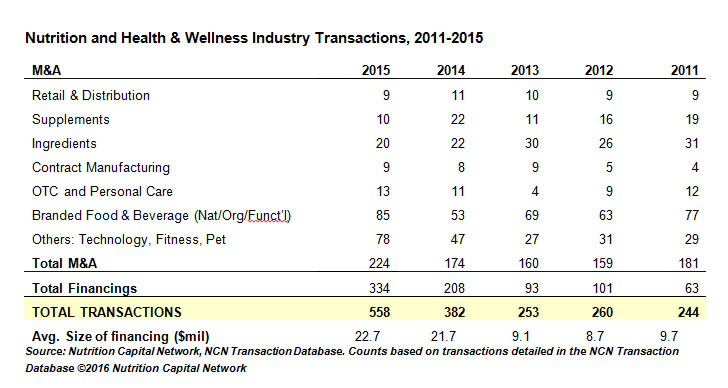 Nutrition Capital Network, an organization that connects investors with high-potential growth companies in the nutrition, health and wellness industry, announced a continuing surge of investments and merger and acquisition activity in branded natural and organic food and beverage companies in 2015, in addition to rapid growth in financings in the emerging world of foodtech.

Grant Ferrier, Nutrition Capital Network founder and CEO , said, “2015 was a record year for equity investments and acquisitions in the nutrition and health and wellness industry, and by no small margin. Venture investments more than doubled in agtech, branded food and beverages, and food delivery; in the latter two categories, more than one deal a week was announced.”

Overall transactions such acquisitions plus equity financings in the nutrition, health and wellness industry totaled 558 in 2015, compared to annual totals of 382 in 2014 and 253 in 2013, according to the NCN Transaction Database. The database tracks deals by several industry segments including supplements, natural and organic food, functional food, ingredients, natural personal care, household goods and more. The database and a more detailed analysis are available to more than 40 NCN Cornerstone Investors.

Mergers and acquisitions accounted for 224 of total industry transactions in 2015 compared to 168 in 2014, a 29 percent increase. Total transaction value of the top 10 listed deals in the food and beverage category was $7 billion.

“Strong brands command a high price,” said Ferrier, citing Krave, Vega, Applegate Farms, Kettle and Smart Balance as examples of top deals in 2015. “The industry's growth rate plus the increase in investment activity will create more opportunities for attractive exits in the future.” According to the NCN Transaction Database, the average sales multiple for a branded food and beverage acquisition increased to 2.4 in 2015, from 2.14 in 2014 and 1.7 in 2013. The average size of a branded food and beverage company acquired increased to $163 million in 2015 from $134 million in 2014 and $121 million in 2013.

NCN recorded 69 equity investments in 2015 in branded food and beverage (mostly natural and organic but also including functional and medical foods), more than doubling the 33 Branded food and beverage financings recorded in the whole of 2014. Highlights included Coca-Cola leading a $149 million round in juice company Suja; Kleiner Perkins, Campbell's Soup, Google Ventures and others investing $120 million in Juicero; and $50 million investments in coconut- and almond-themed beverage companies Harmless Harvest and Califia Farms, respectively.

While financings leveled off in supplements and nutritional ingredients in 2015, perhaps due to uncertainties in the supplement industry, technology segments continued to grab headlines in 2015.

The five technology segments defined and tracked by NCN accounted for 63 percent or 207 of all 331 financing transactions recorded in 2015, with delivery service (78) and apps and information (53) leading the way. Out of 16 companies in the nutrition, health and wellness industry that raised more than $100 million each, eight were food-delivery firms. Industrywide, another 25 firms raised $50 million to $100 million in 2015.

“Developments in late 2015 saw a spike in the financing of delivery models in India and China, and some observers compare disruption in the food distribution space where grocery infrastructure is inconsistent or unreliable to the way cellular phones leap-frogged landlines in developing markets,” Ferrier observed. “The values these companies are commanding worldwide means their consumer reach will have to be a lot broader if most of them are going to survive.”

"While food delivery companies are focused on business disruption, the growth in apps has been consumer driven,” said Mike Dovbish, NCN executive director. “Technology companies that provide information, discovery and resources in health and wellness have proliferated, particularly in niche categories that provide more options for consumers hungry for health-related resources,” he said, citing April 2015’s $300-million investment in Jawbone as an example.

Robust financing in 2015 was also apparent in biotech and agtech, totaling 40 transactions in 2015, compared to 11 in 2014. Highlights included microbiome-focused Seres Therapeutics, food allergy treatment developer Aimmune Therapeutics, and the agricultural drone developers DJI and 3D Robotics, each raising between $50 million and $100 million. Nutritional ingredient focused Pronutria and Gelesis raised $39 million and $22 million, respectively, and investments in a selection of agricultural technologies for efficiency or productivity were led by the Bill & Melinda Gates Foundation, among others.

Said Ferrier, “We appreciate the high profile transactions that put the $260 billion U.S. nutrition, health and wellness industry in the mainstream financial press, but the lifeblood of the industry, and the focus of our network are the smaller high-growth companies, particularly in branded products and ingredient science, where a broad base of entrepreneurs are devoting themselves to bringing health and wellness into the mainstream.” Of the 68 companies that presented business plans and capital requests at four NCN investor meetings in 2015, 14 have already obtained financing. Historically (2007 to mid-2015), 56 percent of NCN presenting companies have closed some kind of transaction.