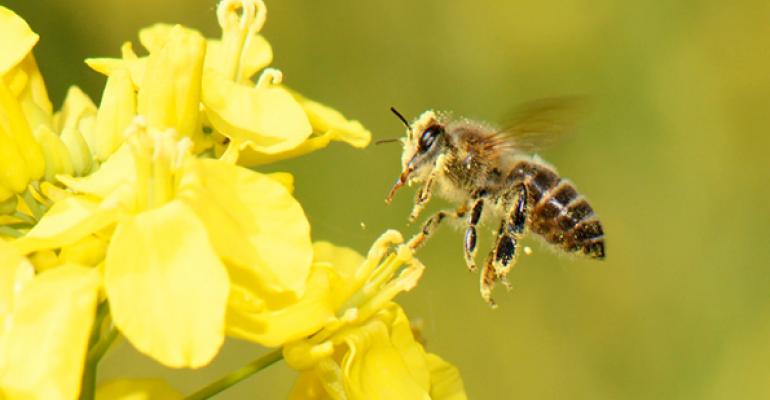 A report just released by The Organic Center shows that organic farming practices are effective in maintaining the health and population of important crop pollinators, predominantly bees, which have been declining at an alarming rate in the past decade and threatening global food security.

Titled "The Role of Organic in Supporting Pollinator Health," the report reviewed 71 studies detailing current threats to pollinators and the impact of organic practices. It found that organic methods not only reduce risks to bees, but actively support the growth and health of populations of bees and other pollinators. The paper outlines pollinator-friendly techniques used by organic farmers that can also be incorporated into conventional farming systems.

"Our paper takes an in-depth look at the challenges faced by honey bees and other pollinators, and we look at organic as a model for supporting pollinator populations," said Jessica Shade, PhD, director of Science Programs for The Organic Center. "We hope this report acts as a tool to educate policymakers, growers and consumers. Bee-friendly practices being used by organic farmers can be adopted by all producers to foster healthy pollinators."

Seventy-five percent of all crops grown for food rely on pollinators, mostly honey bees, for a successful harvest. But over the past decade, the bee population has plummeted. Since 2006, beekeepers have lost over a third of their bee hives. More than $16 billion worth of crops in the United States alone benefit from pollination every year. Without pollination from honey bees, many favorite fruits and vegetables such as apples, berries, carrots and onions would not be on our grocery shelves.

The Center's report notes that no one factor has been consistently singled out as the cause of the disproportionate bee declines. Instead, a number of factors—including exposure to toxic pesticides, parasite and pathogen infections, poor nutrition and loss of habitat—likely interact together, resulting in lethal consequences for bees. Large-scale chemically intensive agricultural production has been implicated as a major source of the threats to pollinators.

Organic as the solution

Organic farming, because of the practices it follows, has been demonstrated by a number of studies to support more pollinators than conventional farming.

"One of the simplest ways to conserve our pollinator populations in an agriculturally reliant world is through organic farming. Consumers can rest assured that every time they purchase an organic product, they are supporting pollinator health," said Shade.

Organic practices have been found to protect and support the health of bees in two critical ways:

"Organic farming supports all of agriculture by maintaining and nourishing healthier pollinator communities, through practices such as crop rotations, hedgerow planting and the use of integrated pest management techniques. Our goal is to gain recognition for these important organic practices," said Shade.

The Organic Center's report follows the recent release from the White House of its official strategy to protect bees and other pollinators. The White House strategy provides funding to protect bee habitat, increase research, and directs the Environmental Protection Agency to re-evaluate neonicotinoids.