The organic leaders to be honored at Natural Products Expo East were selected for their commitment and vision to advance organic.

Two individuals and a farming couple chosen to receive Organic Leadership Awards from the Organic Trade Association this coming September each have the drive to make a difference, a strong belief that organic practices are the way to go, and a commitment to mentoring others.

One has touched all sectors and corners of organic production around the world because of her leadership in training certifiers and inspectors. Through persistence and adaptation, the second started a small organic farm, created a thriving business, and evolved into an influential role model for local small-scale growers. The dynamic couple, meanwhile, operates four grass-based organic dairies on 4,300 acres of irrigated pasture in California, an organic creamery, large-scale organic pastured poultry and egg operation, and pastured pork enterprise with her husband and five children.

This year's award honorees are:

"Each has proven that they have what it takes to inspire others and uphold the integrity and practices that make organic agriculture the standout way to manage our food system," said Laura Batcha, executive director and CEO of the Organic Trade Association. "The theme for this year's event is 'Recipe for Leadership' and each of our honorees has used their own unique blend of ingredients and masterful techniques to serve up a style of leadership that is advancing the organic sector." 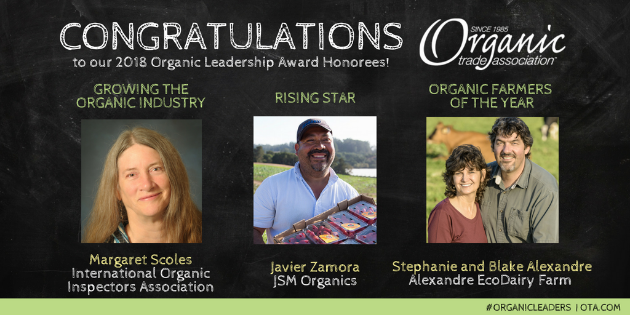 Margaret Scoles, who started out as training manager and coordinator in 1999 for the International Organic Inspectors Association subsequently became executive director, a title she still holds. But she has been a tireless educator, advocate and ambassador for the organic world even before that.

Scoles' involvement in agriculture and the organic movement began in the late 1980s. After graduating from the University of Arizona, she was an Organic Crop Improvement Association reviewer and inspector. In 1991, she was a founding member of the then-named Independent Organic Inspectors Association.

"Any person on Earth who has taken an IOIA training has been affected by Margaret's indefatigable efforts to improve the integrity of organic farming, production, distribution and sales. She has grown IOIA's training, membership, programs and influence, such that graduates of these trainings are not only professional inspectors. IOIA students can be found among employees of major companies, certifiers, the USDA National Organic Program, members of the National Organic Standards Board, IFOAM and Organic Trade Association Board members. While not every certifier around the world requires their inspectors to be externally trained, IOIA is considered the highest achievement for inspector and certifier education," her nomination letter explained.

It added, "It is not an exaggeration to say that most every certified organic product on earth is only a few degrees of separation from Margaret. Whether it's food, textiles, beauty care products; whether it is Europe or Asia or the USA--the chances are that each item was inspected, certified and/or produced by someone who attended an IOIA training, or was trained by someone who attended an IOIA training. The reach of Margaret's leadership has touched all sectors and corners of organic production around the world."

The primary nomination and 67 additional letters of endorsement give testimony to how Scoles has affected their lives, both professionally and personally.

"This award is an extraordinary honor, and I feel all of the inspectors in my global community share it with me," says Scoles. She adds, "Inspectors are the invisible but critical link between the operation and the consumer who wants their products. We strive to make sure that when the label says organic, it really means organic. Without inspectors, none of us would be here. IOIA exists to bring connectivity to the inspector community all over the world and to bring the collective voice of inspectors to the table. A big part of our mission is training, but that's not all we do.  I believe my work is to continue to push on for more rigorous inspections by well-trained and qualified inspectors."

Letters came from throughout the U.S. including a letter from Sen. Jon Tester of Montana, as well as from such places as Australia, Germany, Guatemala, Nepal and South Korea.

Immigrating to the United States in 1986, Javier Zamora worked in the service industry in southern California for 20 years before going back to school at the age of 43, earning his GED and a degree in landscape design before enrolling in the horticulture program at Cabrillo College. Sharpening his farming skills through the Agriculture and Land-Based Training Association (ALBA), he started farming organically in 2012 on 1.5 acres. Today, as owner of JMS Organics, he farms over 100 acres on California's Central Coast. He also is a mentor to other farmers and a leading voice in the local organic community.

He frequently speaks on farmer panels and at events, including, most recently, at The Organic Center's 2018 Organic Confluences Summit. He is a strong advocate for beginning farmers and federal conservation programs. Zamora sits on the Boards of ALBA, Ecological Farming Association, and Pajaro Valley Water Management Agency, and is a member of USDA's Advisory Committee on Beginning Farmers and Ranchers.

Exhibiting great capacity for resilience, he started a small organic farm in a region where land values are prohibitively expensive. As an immigrant who did not know the language or culture when he arrived, he has persisted and adapted, creating a thriving business, and serving as a role model for local small-scale growers. He is an advocate for immigrant farmers and farmworkers in California. Zamora is known for paying his workers a more than fair wage, and has expanded the number of workers he employs

"You help others succeed because you've been given that opportunity. That's the real American way," Zamora explains.

Growing up on a dairy farm in Southern California, Stephanie Alexandre spent time with the cows as soon as she could walk. Soon, she was helping her parents with the chores. As a child, she loved showing her dairy cows in 4-H competitions, leading her to pursue an agriculture business degree at California Polytechnic in San Luis Obispo. There, she met her future husband Blake Alexandre, a fourth generation grass-based Northern California dairy farmer, who is an entrepreneurial man with a passion for leading, both cows and people. They began dairying in 1988 in Southern California. In 1992, the couple bought an existing operation on the Northern California coast, and in the late 1990s, converted the operation, known today as Alexandre Family Farm, to organic production. CCOF has certified the operation since 2003.

Today, Blake, Stephanie and their five children operate four grass-based organic dairies on 4,300 acres of irrigated pasture. They grow most of their own hay on approximately 2,500 acres of organic cropland in Modoc County. Everything the family does is organic--an organic pastured poultry and egg operation, organic pastured pork and organic grass-fed beef, and most recently an organic creamery where the family bottles their own organic milk.  They are passionate about regenerative agriculture and environmental stewardship, where life flourishes on their coastal farm, including over 240 Roosevelt Elk that graze their pastures.  Alexandre Family Farm maintains a Farmstead Membership in the Organic Trade Association.

Demonstrating extensive personal commitment to the organic community Stephanie served on the CCOF board of directors for 10 years, and currently serves as an Advisory Committee member of CCOF's Future Organic Farmer Grant Fund. Blake has served on the California Organic Products Advisory Committee for eight years and currently serving on the National Farm Bureau Organic Committee. In their community, they are active in the local youth programs. Blake is passionate about soils, while Stephanie is a passionate cook and teacher of old-fashioned nutrient dense foods.  Blake and Stephanie's five children--fifth generation grass-based dairy farmers--are continuing the family farming tradition, each having their own unique passions within the family business. It is a testament to Blake and Stephanie, through their love and commitment to farming, that each child has gone away to college, graduated, and returned back to the Alexandre Family Farm with different and unique roles.

"Being named Organic Farmer of the Year is a great honor for us. It is one we share because we are absolutely a team with our farm and family. Our family wants to make a difference in our food supply," Stephanie says, adding, "As farmers, providing organic food is a very purposeful life."

The Organic Trade Association's 2018 Leadership Awards Celebration will take place Wednesday, Sept. 12, at the Columbus Center in Baltimore, Maryland. Tickets are now on sale and sponsorships available on the event website.