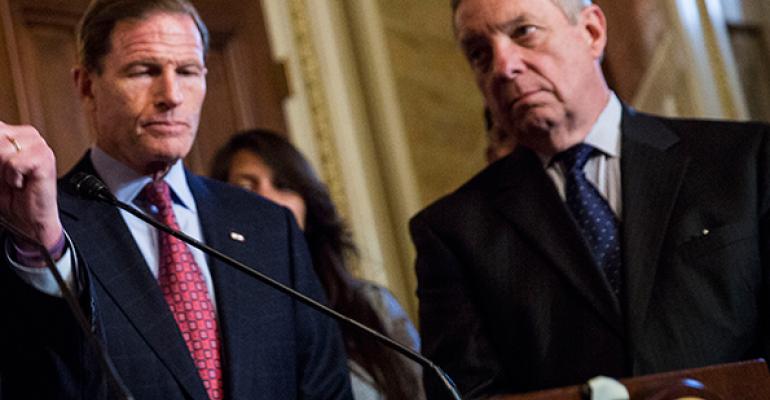 When a set of amendments that would have effectively limited access to supplements on military bases failed to make it into the Department of Defense spending bill last week, it was clearly a victory for the supplement industry.

But was it also a defeat for Sen. Dick Durbin?

The Illinois senator is famously a critic of the supplement industry, but it’s likely he greeted last week’s news with little more than a shrug. Along with Connecticut Sen. Richard Blumenthal, Durbin has been sponsoring a Dietary Supplement Labeling Act for years, and the two senators have failed to find traction. Despite a steady drumbeat of negative media on everything from omega-3s to adulterated herbal extracts, the DSLA has gotten little attention and gone nowhere. So when Durbin and Blumenthal seemingly latched onto last months’ HBO “Real Sports” report rehashing charges of dangerous sports supplement use in the military with more proposed measures, it shouldn’t surprise them or anybody else that so little came of it.

The Department of Defense spending bill passed in the Senate on Thursday, the day after the Council for Responsible Nutrition’s annual Day on the Hill lobbying event. Interviewed about Durbin’s crusade and other legislative issues last month, CRN CEO Steve Mister told Nutrition Business Journal that Durbin’s bill is unfounded and unfortunate but also unlikely to pass. “The sun will come up in the east and every spring in odd-numbered years, Sen. Durbin will reintroduce the DSLA,” Mister said. As they did with last week’s amendments, CRN and other trade agencies are able to quickly point out that FDA regulators already have tools adequate to protect the public health. They keep lobbying. It keeps working.

He also keeps ignoring the reality of the dialogue and dynamic between the industry and lawmakers. In an email statement to NBJ last month, Durbin repeated his charges of inadequate regulation, but he also discounted the industry’s outreach to Congress. The statement held that while Sen. Durbin "welcomes the opportunity to work with industry to come together on common sense solutions to help address the growing concerns both consumers and regulators have over dietary supplements, we have not seen an attempt from the industry to engage in that discussion.”

Maybe he was out of the office last week when CRN brought its members to meet with representatives and staffers.

Two weeks after Durbin’s emailed statement, HBO aired the “Real Sports” episode, and a week later Durbin and Blumenthal introduced their amendments to the defense spending bill. It’s difficult to imagine the HBO report suddenly alerted them to a looming danger, especially when many of the charges were long ago discredited. It’s easier to believe they saw an opportunity for a headline.

What they didn’t see was an opportunity for a real conversation.

Fortunately, when CRN brought industry leaders to Capitol Hill last week, plenty of other legislators were ready to listen.