HomeNewsState attorneys general ask Congress to investigate supplements
Recent
Latest
3 reasons natural retailers are inflation-friendly shopping destinations
May 25, 2022
Sponsored Content
Organic agriculture and its impact on ingredients and the planet – webinar
Sponsored Content
The goodness wrapped in a certified organic seal – video
Podcast: What brands need to get on shelf at Fresh Thyme Market
May 24, 2022
Trending
Getting ready for 2023: Trends for brands to consider
May 17, 2022
6 tips to promote consumer understanding of Certified Organic
May 18, 2022
The Planting Hope Company aims to prove gender equity leads to success
May 23, 2022
Natural beauty market trends
Jun 16, 2021 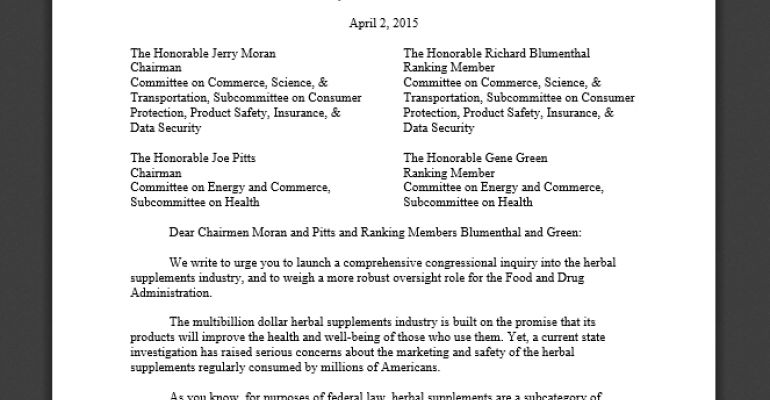 The herbal supplements saga continues to unfold as attorneys general from 14 states send a letter to Congress. Here&#39;s the letter and responses from two industry trade groups. 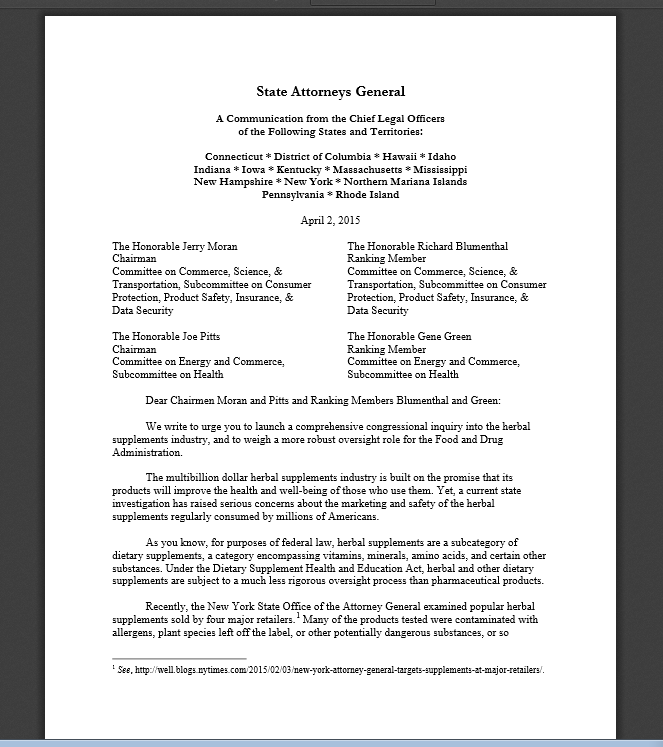 WASHINGTON, D.C. – The Natural Products Association (NPA) is the leading representative of the dietary supplement and natural products industry. NPA CEO and Executive Director Daniel Fabricant, Ph.D., former director of the Division of Dietary Supplement Programs at the Food and Drug Administration (FDA), comments on the announcement that New York Attorney General Eric Schneiderman and 13 other state attorneys general sent a letter to Congress requesting an investigation into herbal supplements and calling for more regulatory oversight of the industry by the FDA:

“Attorney General Schneiderman has admitted that the federal Good Manufacturing Practices currently in place for dietary supplements are sufficient, and companies such as GNC are in compliance with those, but yet he moves forward in his request to spend federal taxpayer dollars on an investigation into an industry that is fully regulated by the FDA.

The Natural Products Association regards this most recent action by Attorney General Schneiderman as added harassment based on science fiction. For the past two months, the attorney general has continued to escalate his attack on the supplement industry without any legitimate data to back up his arguments.

As the former head of the FDA’s Division of Dietary Supplement Programs, I have seen first-hand how the agency may take swift and forceful action when dietary supplement companies violate federal regulations. The FDA is properly equipped to identify and go after firms that pose a threat to public health. Attorney General Schneiderman’s claims that the FDA doesn’t have ample authority in this area show a complete misunderstanding of the regulatory structure in place to protect consumers and remove products from the market.

There are serious issues facing Congress right now, and this request from Attorney General Schneiderman and the 13 other state attorneys general is an unnecessary distraction for our legislative branch. NPA encourages Attorney General Schneiderman to direct his time and resources toward issues that truly do present a danger to consumers, and end his efforts to take away products that contribute daily to the overall health and wellness of hundreds of millions of Americans.”

CRN to State Attorneys General: Have You Seen the New York AG’s Test?

Washington, D.C., April 2, 2015—In response to a letter signed by 14 State Attorneys General requesting a Congressional inquiry into the herbal supplements industry, the Council for Responsible Nutrition (CRN), the leading trade association for the dietary supplement and functional food industry, issued the following statement:

“It is unfortunate that the New York State Attorney General (NY AG) has spearheaded a request for Congress to spend taxpayers’ money to ‘launch a comprehensive congressional inquiry into the herbal supplements industry’ when the industry is already amply regulated on a federal level by FDA and FTC. In fact, concerns raised in that letter about alleged widespread safety issues are not true, based on government’s post-market surveillance system which demonstrates relatively few safety issues for these products, particularly in comparison to other industries regulated by FDA.

The ‘serious concerns’ raised in the letter to Congress are based on an initial investigation from the NY AG which has been roundly criticized and discredited not only by industry scientists, but also by critics of the herbal supplements industry, as well as by a number of journalists. Further, the NY AG has refused to release the details of the findings from his investigation, demonstrating a disturbing lack of transparency, and making it impossible for scientific experts to answer with certainty—although there are plausible theories—as to why some of the products tested contained allergens and plant species left off the label. What is certain is that the basis of the report—a testing methodology known as DNA Barcoding—is simply an inappropriate methodology for testing herbal supplements made from herbal extracts, thereby making the NY AG’s report misleading. Despite these considerable doubts, the NY AG refuses to share his test results and methodology with FDA, with the media who continue to report on this story, with the companies implicated in those results, or even with the other state AGs he has persuaded to join in his campaign. In fact, an agreement between the NY AG and one of these companies earlier in the week explicitly stated that there were no issues with the herbal supplements being investigated, and because of this, the products were returned to the store shelves.

Over the past month, CRN has met with a number of state AGs around the country, and we are gratified that the concerns go away once we’re given the opportunity to fully explain the issue. Herbal supplements are regulated by FDA as a category of food and substantial regulations are in place for pre-market notification of new ingredients, good manufacturing practices (including identity testing of both raw materials and finished products), product labeling and post-market surveillance (i.e., mandatory reporting of any serious adverse events associated with these products). CRN is a strong and vocal advocate for more resources to FDA for stronger and swifter enforcement of these existing regulations. We acknowledge there are some problems facing our industry, and we wish that the state AGs had focused their efforts on helping solve the serious problem of criminals who spike products with illegal drugs and market them illegally as dietary supplements.

On behalf of our member companies, our association will certainly cooperate and answer any questions Congress may have about our industry as we share the common goal of making sure that consumers have access to the safe and beneficial herbal supplement products they use to improve their health and well-being.”