HomeNewsInvestmentSustain Natural secures $2.5 million in funding
Recent
Latest
3 reasons natural retailers are inflation-friendly shopping destinations
May 25, 2022
Sponsored Content
Organic agriculture and its impact on ingredients and the planet – webinar
Sponsored Content
The goodness wrapped in a certified organic seal – video
Podcast: What brands need to get on shelf at Fresh Thyme Market
May 24, 2022
Trending
Getting ready for 2023: Trends for brands to consider
May 17, 2022
6 tips to promote consumer understanding of Certified Organic
May 18, 2022
The Planting Hope Company aims to prove gender equity leads to success
May 23, 2022
Natural beauty market trends
Jun 16, 2021 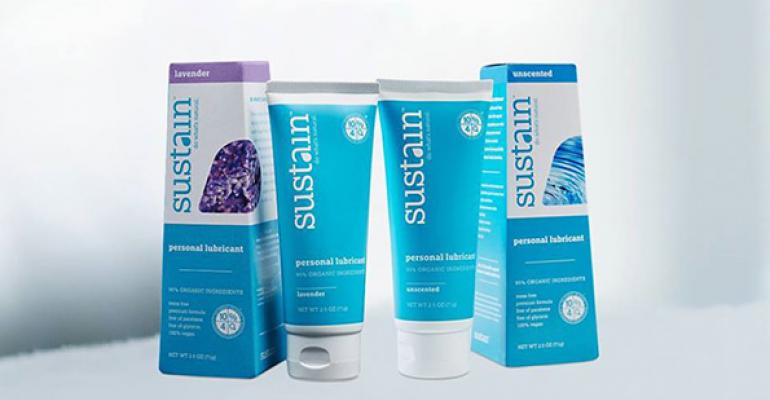 As the sexual wellness brand prepares to double its retail presence in 2016, it finds support from new strategic investors including Seventh Generation&rsquo;s John Repogle and Asana Co-Founder Justin Rosenstein.

“Sustain is playing to multiple megatrends — natural health and wellness, sustainability and targeting millennial women — and, as such is an investment that appeals on many levels,” said John Repogle, CEO of Seventh Generation. “With a superb leadership team and an appealing brand proposition, this will become one of the great brands with the next generation of consumers.”

In 2016, Sustain aims to double its retail distribution to 8,000 stores nationwide and introduce a new condom to meet consumer demand for a larger size. The past year has been one of significant growth during which the company entered more than 4,000 new retailers, including over 200 new Whole Foods and 200 Target stores, further solidifying its position as a leader in the non-toxic sexual wellness space. In 2015, the company also introduced its personal lubricants and “post-play” wipes, adding two new product lines in addition to its condoms.

One of the ways Sustain has been able to differentiate itself is through its dedicated fund, 10%4Women, in which the company donates 10 percent of pre-tax profits to organizations that provide reproductive healthcare and family planning services to low-income women in the U.S. With the new funding, Sustain will be able to increase its commitment to these organizations, such as Planned Parenthood, who provide STI testing and prevention, birth control and breast cancer screenings for women who would otherwise lack access.

Sustain plans to upgrade and redefine their current and upcoming packaging design with the help of famed industrial designer Karim Rashid, a recent investor. The company also plans to expand upon strategic partnerships, including developing content and activations for Sustain’s yearlong partnership with Wanderlust Yoga and Wellness Festivals across the nation.

“We are so thrilled and honored to have this new investment from such a unique and diverse group of leaders across many industries,” said Jeffrey Hollender. “This is further proof that there’s a larger movement in play as we continue to break down stigma surrounding safe sex and bring innovative new products to market that will have a positive impact on people’s health and attitudes. Consumers around the country deserve more.”

The investment comes at a time when health advocates are calling for ingredients disclosure across the consumer product industry, with a specific focus on feminine care and wellness products. Using social media platforms to galvanize public support, many advocates have applied enough pressure to yield some positive results, but the industry has many hurdles to overcome before full disclosure is the norm. Sustain’s founders have been at the forefront of this movement from the beginning of Seventh Generation more than 25 years ago and will continue to advocate for the consumer’s right to know what is inside the products they use every day. Today, Sustain is the only condom brand that discloses every single ingredient used to manufacture its condoms.

Over the past year there has also been a renewed focus on STD and HIV prevention in the United States, with the CDC’s new study reporting that these infections are on the rise, some at an alarming rate. In 2014, increases were seen in all three nationally reported STD – chlamydia, gonorrhea, and syphilis – up as much as 15.1 percent since 2013. Additionally, the approximately 1.4 million reported cases of chlamydia represent the highest number of annual cases of any condition ever reported to the CDC. The research points to a clear call for better prevention measures such as condoms, with the biggest public health threat posed by infections among young people – particularly women – who account for half the estimated 20 million new infections each year. (In fact, one in four college students will contract an STI by the end of their first year.) From the beginning, Sustain co-founder Meika Hollender has worked hard to promote condom usage consistently and correctly, and to inspire more young women to purchase and carry condoms with confidence.

“It’s hard to imagine anything that can change the world as much as safe sex,” said Heidi Zak, founder of ThirdLove. “I’m interested in investing in people and ideas that can change the world, and I’m especially drawn to businesses that are led by inspiring women. With Sustain, Meika Hollender has tapped into an industry that is ripe for disruption, with the passion and wherewithal to drive change forward.”