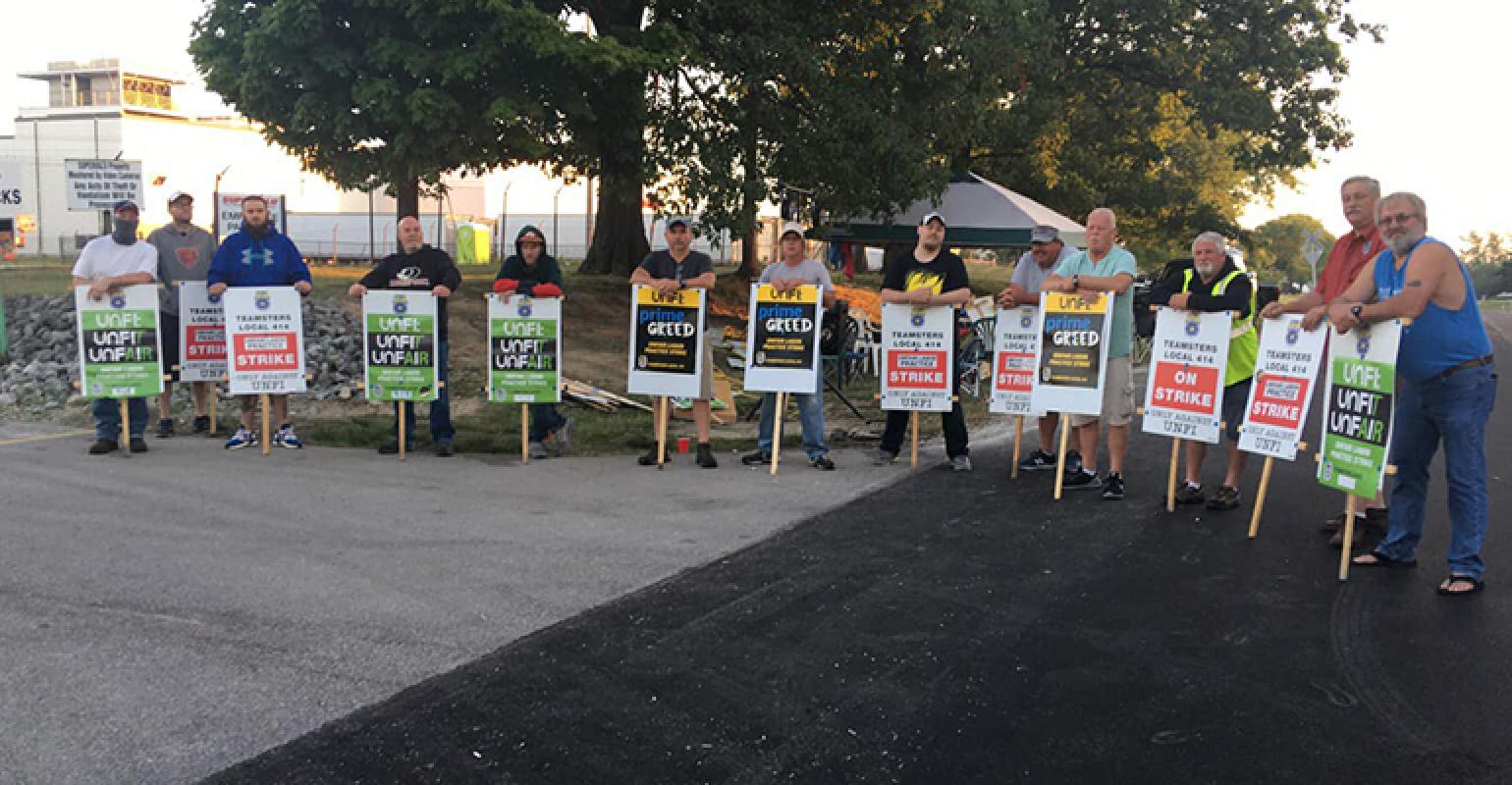 About 160 member drivers, warehouse and maintenance workers are taking part in the work stoppage, according to the local. The union, which represents 2,500 Teamsters members overall in Fort Wayne and northeastern Indiana, claims UNFI engaged in unfair labor practices by arbitrarily firing two members.

A “major issue of contention,” Teamsters Local 414 said, involves a work rule on how union employees must respond when given a direct order by an UNFI supervisor or manager. The local reported it has filed an unfair labor practice charge with the National Labor Relations Board in connection with the firing of a 35-year Fort Wayne DC worker for allegedly failing to respond to a supervisor’s order. One other member was fired and another suspended under similar circumstances, the union said. The union steward wasn't present when the supervisor gave the order, according to the union.

“The big issue is whether a union steward or another member has to be present when UNFI supervisors issue that order,” Local 414 said in a July 21 message to membership. “Our historic work rules require the presence of a union steward or member when such an order is issued.”

In addition, the local said UNFI employee members have been working without a contract “for many months,” despite participating in collective bargaining for almost a year.

UNFI on Thursday denounced Teamsters Local 414 for “rejecting a highly competitive long-term contract” and “initiating an illegal strike amidst the COVID-19 crisis” at the Fort Wayne DC, a former facility of Supervalu, which UNFI acquired in a $2.9 billion deal in 2018.

“We’re deeply disturbed that Local 414’s leadership in Fort Wayne, Indiana, has chosen to disregard the best interests of its own members and orchestrate a counterproductive illegal strike,” Jill Sutton, chief legal officer of UNFI, said in a statement. “UNFI put on the table a generous four-year contract offer that would preserve health plan benefits for current associates, maintain pension contributions and provide strong annual wage increases in line with other facilities in the Midwest.

"In exchange for delivering this stability and security to our valued associates, we asked Local 414’s leaders to meet us halfway on updating decades-old work rules and operational policies with terms aligned to other standard union agreements across the country. Unfortunately, Local 414’s leadership rejected a generous offer that would have provided meaningful security and stability to associates over a single provision that is completely out of line with our other contracts or common market practice.”

During the pandemic, UNFI has stepped up support of employees—including workers at the Fort Wayne facility—by implementing $2-per-hour “temporary state of emergency” bonuses, investing in cleaning and safety practices, and easing time-off policies and production standards, according to Sutton.

“We’re particularly disappointed that during a time when Americans are facing extreme economic pressures, Local 414’s leadership is unwilling to protect its members by accepting our four-year contract that includes annual wage increases and preserved benefits,” she added.

However, Teamsters Local 414 said dozens of rounds of talks with UNFI since last August have proved fruitless in producing a new contract.

“Over the course of more than 40 bargaining sessions, we have worked hard to reach an agreement with UNFI for a new collective bargaining agreement. Unfortunately, we have not reached an agreement. Several open issues remain, including health insurance, wages and work rules,” Teamsters Local 414 said in a July message to members.

“Throughout these negotiations, developing trust has been difficult. UNFI came into negotiations with a number of extreme proposals, including proposals regarding work rules, subcontracting, management rights, mandatory arbitration of individual civil rights claims, and changes to the standards of production,” the union stated. “It took months for UNFI to move off some of the more extreme proposals. In the process, Local 414’s bargaining committee was flexible in its efforts to reach agreement, including by making major movement toward a primary goal of UNFI to revamp work rules that have been in place for more than 30 years. Yet we have not reach agreement.”

As a result of the strike, UNFI is now implementing contingency plans and enlisting third-party partners to maintain business continuity, according to Jim Gehr, chief supply chain officer.

“UNFI will not allow a localized labor dispute in Fort Wayne to impede our long-term customer service in the Midwest region or anywhere else, especially during the pandemic,” Gehr said Thursday.

“UNFI remains steadfast in supporting its associates while adapting its business to new economic realities and shifting customer expectations. Since the pandemic began, we’ve also spared no expense when it comes to investing in industry-leading safety and risk management initiatives designed to help keep our associates, customers and partners safe amidst the pandemic,” he explained.

“The reality is that in order for UNFI to meet the needs of its various stakeholders, including associates across the country deserving of strong wages and benefits, it is important to have labor agreements that allow us to be flexible and nimble in today’s changing food distribution environment," Gehr said. "This is exactly the type of agreement we have worked out with other unions and have been trying to work towards in Fort Wayne.”

Teamsters Local 414 said in a July 23 press release that the two sides have met more than 40 times to negotiate an agreement.

“The members of Local 414 at UNFI have been working without a contract for many months, including through the COVID-19 national pandemic,” the union said in that press release. “During this time, our brothers and sisters have put their safety and health at risk daily to ensure the delivery of the food products that UNFI distributes to numerous regional grocery stores.”

In December, UNFI and Teamsters Local 414 returned to the bargaining table after a strike at Fort Wayne DC led to walkouts at UNFI facilities in Hopkins, Minnesota, and Green Bay, Wisconsin, whose 850 combined Teamsters members honored the picket lines. That labor dispute and others stem in part from UNFI’s merger with Supervalu, which brought thousands of Teamsters members at DCs nationwide under a single company. At the time of the December work stoppage, the Teamsters union described Supervalu as a “decades-long, Teamster-represented company” but said UNFI “has had a troubled labor history.”