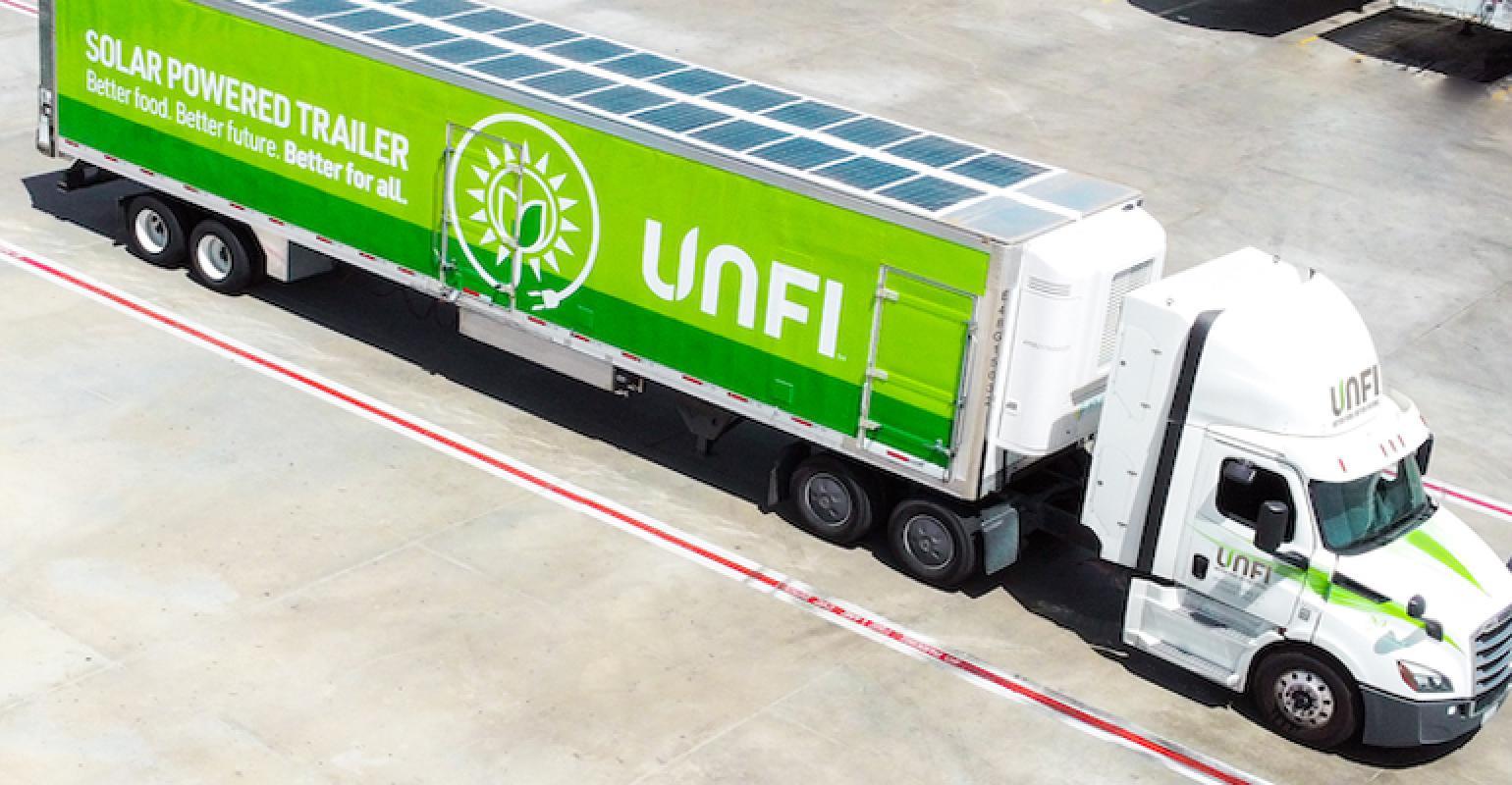 As part of its efforts to reduce carbon emissions, United Natural Foods Inc. (UNFI) is adding 53 all-electric transport refrigerated trailer units (TRUs) to the truck fleet at its distribution center in Riverside, California.

UNFI said Wednesday it’s one of the first wholesalers to use the zero-emission TRU technology. The Providence, Rhode Island-based grocery distributor noted that the fleet transition comes after a January mandate by the California Air Resources Board (CARB) to require zero emissions on TRUs sold or operated in the state by Dec. 31, 2029.

The all-electric TRUs feature a high-efficiency refrigeration system powered by roof-mounted solar photovoltaic panels, a wheel-momentum generator, lithium-ion batteries, and an auxiliary power unit, eliminating the need for diesel fuel—and its resulting emissions—to drive the refrigeration system, according to UNFI. Multi-zone temperature settings in the new TRUs can maintain a full load of frozen product from minus 10 to minus 20 degrees F throughout the distribution route, the company said.

With the all-electric TRUs, UNFI projects a savings of about 135,000 gallons of diesel fuel per year as it cuts down particulate matter pollutant and greenhouse gas emissions.

In December, UNFI announced that it was the first North American grocery wholesaler to commit to emissions reduction goals under the Science-Based Targets initiative (SBTi), an international effort to steer private-sector companies toward a net-zero economy to help lessen the impact of global climate change. UNFI said its targets are a fixture of its “Better for All” 2030 environmental, social and governance (ESG) plan, which includes objectives to cut emissions, improve operational efficiency and invest in clean energy.

“Nearly 50% of UNFI’s direct greenhouse gas emissions are from our fleet of trucks and trailers,” Jeff Wismans, national director of fleet operations for UNFI, said in a statement. “These 53 all-electric TRUs will help us get a head start on the proposed CARB zero-emission requirements and are expected to allow us to decrease our emissions as we make progress on our climate action commitments under Better For All.”

For the shift to all-electric cold trailers at the Riverside DC, UNFI will remove 53 of its diesel-powered TRUs from operation and enlist Advanced Energy Machines (AEM), a provider of electrification of refrigerated trailers, to rebuild the units. The distributor said it then will lease the TRUs via PLM Trailer Leasing for five years while it maps out the integration of the all-electric trailers into operations.

To rein in the cost of retrofitting the diesel TRUs, PLM applied for and received vouchers on UNFI’s behalf through CARB’s Clean Off Road Equipment (CORE) Voucher Incentive Project, UNFI said. CARB launched CORE in 2017 to spur the purchase of zero-emission freight-handling equipment in California by providing a streamlined voucher process to offset the higher cost of these technologies.

“Adding these TRUs comes after an exhaustive four-month pilot testing the equipment through a variety of conditions, with the intention to replace diesel-powered TRUs,” Wismans explained. “When we look at it from an operational standpoint, we’re not changing anything, but it gives us a fresh look at running our operations and finding additional efficiencies.”