"This is a really exciting time to be at UNFI," CEO Steve Spinner told investors participating in the ICR Conference.

"Our company has performed in an exemplary way through the worst of COVID and we continue to do so," he said.

Even as he prepares for retirement in July, Spinner continues to be optimistic about the food wholesaler's future and proud of the company's progress since he took over in 2016.

The annual ICR Conference connects executives from more than 250 public and private companies with select investors throughout the week—via internet connections this year, of course. Spinner and Chief Financial Officer John Howard made UNFI's presentation Tuesday.

Spinner also predicted that when FY21 ends in July, UNFI will have paid down $1 billion of the debt it took on to purchase competing food distributor SuperValu in 2018.

"We're building something that is really, really distinctive and really unique," he said.

"We are transforming the way in which food gets from its point of manufacture and, ultimately, to the retailers," he said, adding that UNFI gives retailers the brands and the services they need to compete and be successful.

"We've got a ton of opportunity in front of us without needing inflation, just by selling the products we already have to existing customers and new customers who, we think, will be really interested in what we have to say and what we have to offer," Spinner said. 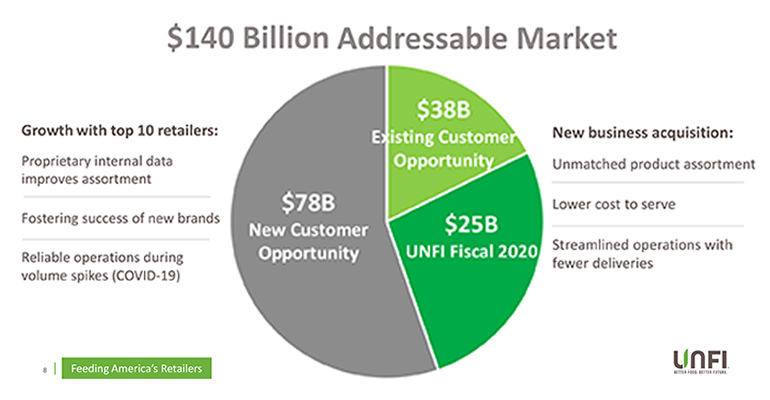 Because of a $10 billion, 10-year contract with Key Foods, signed in October, UNFI is building a new distribution center in Allentown, Pennsylvania. In turn, that DC will allow UNFI to better compete in the New York City market and elsewhere in the Northeast.

Already, UNFI sells $2 billion in private label products to retailers, Spinner said. He expects independent retailers to increase their private label offerings because they generally have a smaller-than-average selection, he said.

UNFI's e-commerce business has grown from 3% of sales to 19% during the COVID-19 pandemic. Sales grew 93% year over year, Howard said.

During a Q&A session, Spinner addressed the issue of the company's retailers, which it inherited in the SuperValu acquisition. Cub Foods and Shoppers were going to be sold, but UNFI decided to hold off when the pandemic started.

Howard said the retailers have generated $100 million in EBITDA.

Cub Foods, in particular, has been trending "tremendously well," Spinner said, particularly in Minneapolis, Minnesota. "Cub made a huge difference in the community during COVID."

When several stores were closed during the Black Lives Matter demonstrations early in the summer, Cub hired buses to take shoppers from a closed location to a nearby available store, Howard pointed out.

Nevertheless, Spinner expects that UNFI will sell the retailers within the next two years, which will generate cash that can be used to further pay down debt.

Because UNFI will release its second-quarter financial report in about a month, Spinner would not discuss top-line growth. He said that he feels good about it, though.