UNFI reported Wednesday that third-quarter net sales increased to $5.96 billion in the third quarter of 2019, an increase of $3.3 billion or 125% from a year ago.

Of that increase, $3.24 billion came from Supervalu, which UNFI acquired in October. Those sales were down about 3.6% from last year, while United Natural Foods Inc.'s legacy sales increased 2.8%, according to executives.

“The retail world continues to change dramatically, and UNFI is poised to capture the growth associated with the changes ahead,” Steven L. Spinner, chairman and chief executive officer, said during Wednesday’s earnings call. 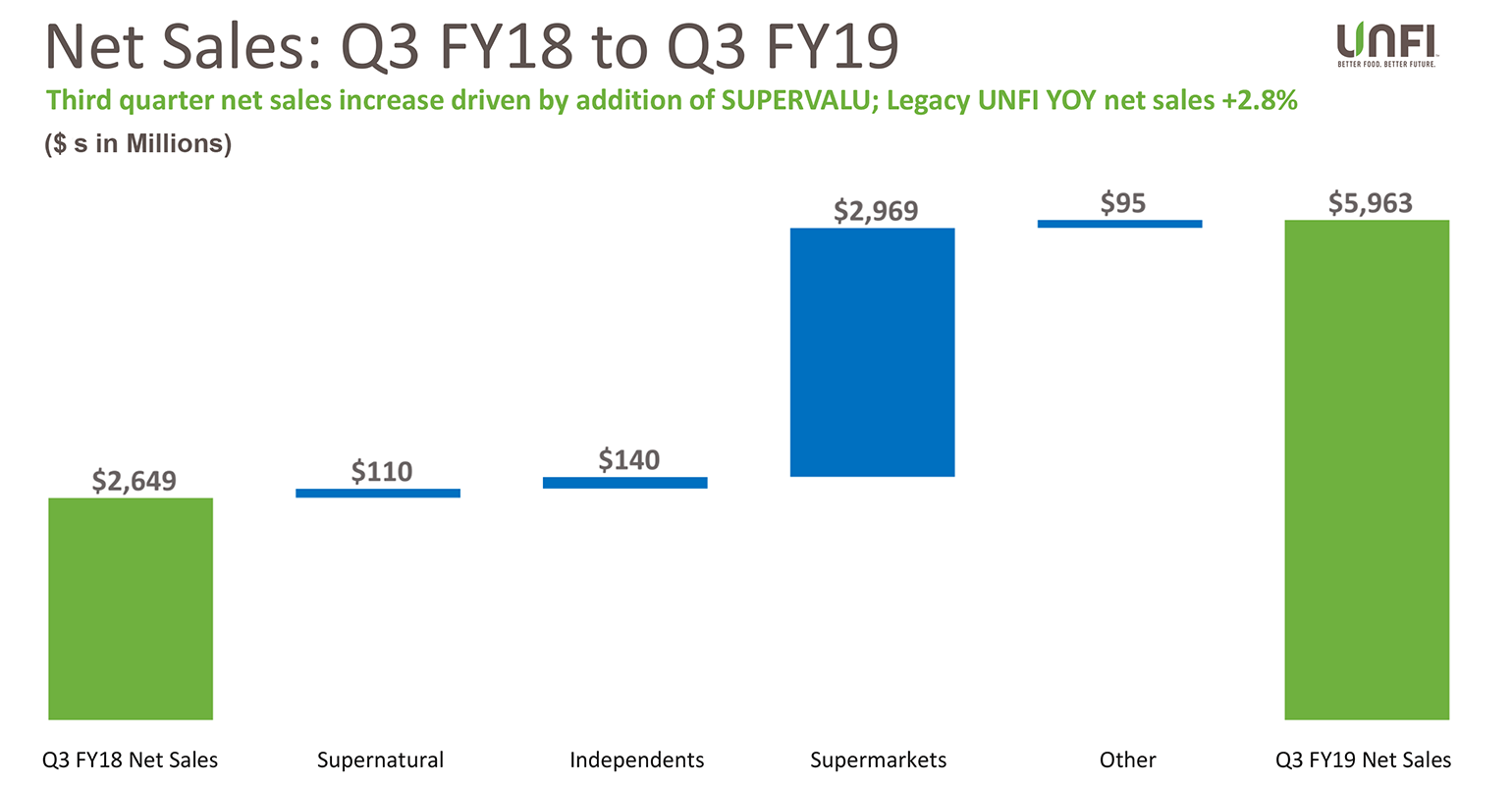 Spinner opened the call by announcing that UNFI is now one nationwide company, following last year’s acquisition of Supervalu. The company now refers to financial results from Supervalu legacy customers as “conventional,” while UNFI legacy customers’ results are “natural.”

To carry out the integration, a national leadership team is working to deliver on UNFI’s strategies, and Spinner said he is pleased with its progress. As examples, he noted that all four distribution centers now use the same inventory and ordering systems, and all employees are now on one payroll platform. A new distribution center in Centralia, Washington, is scheduled to begin operating this summer.

Besides simplifying operations, Chief Operations Office Sean Griffin said those integrations save the company money. Shrink, or loss of merchandise, in some of the distribution centers is still higher than expected, but that problem should be corrected during the fourth quarter, he said. He did not specify the cause of the shrink, which can result from theft, damaged merchandise or even inventory issues.

Sales teams are being reorganized into four regions, each with a regional president and responsible for sales of both natural and conventional products, Spinner said.

Those sales teams, which will be finalized this summer, will help the company recapture center-store and regional sales decreases, Griffin said.

“We are seeing challenges in the center store as well as in a limited number of geographies, where we have experienced temporarily lower levels of service. We know we can fix that,” he said.

Without the addition of Supervalu’s sales, the supernatural channel would account for 40.5% of UNFI’s third-quarter sales. Similarly, independent channel would be 26%; supermarkets, 25.5%; and other (mostly e-commerce), 8.15%.

UNFI paid down $21 million of its outstanding debt during the quarter. The company owes $3.16 billion in debt and capital lease obligations, net of cash and cash equivalents, Zechmeister said. Since the end of the first quarter, UNFI has reduced its debt about $187 million.

The company also updated its outlook for fiscal 2019, which ends July 27. Although it previously predicted a loss for this year, Zechmeister said the loss will now be lower than the company had expected: between $5.65 and $5.85 per share, compared with its previous estimate of $6.10 to $6.50 per share.