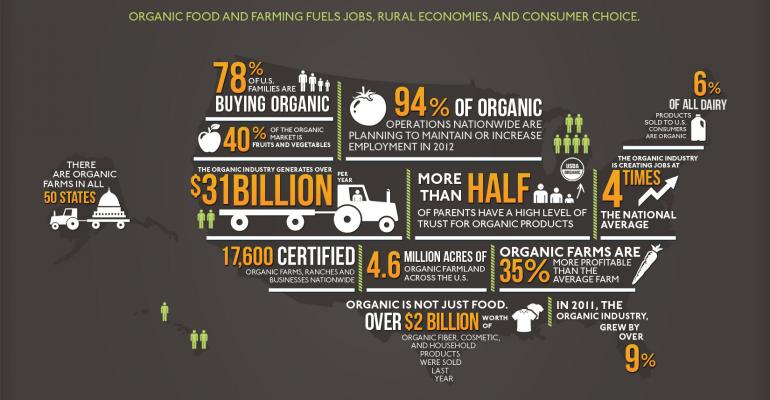 <p> Infographic by OTA. <a href="http://images.magnetmail.net/images/clients/OTA/OTAinfographiclarge%281%29.jpg" target="_blank">Click here to enlarge</a>.</p>
In its 2012 Organic Industry Survey, the Organic Trade Association reports strong growth for the organic sector. What will it take for the industry to post double-digit growth in 2013 and beyond?

Surpassing the $30 billion mark for the first time, the U.S. organic industry grew by 9.5 percent overall to reach $31.5 billion in sales in 2011, according to the Organic Trade Association’s (OTA’s) 2012 Organic Industry Survey released today.

"Consumers are increasingly engaged and discerning when they shop, making decisions based on their values and awareness about health and environmental concerns," said Christine Bushway, OTA’s executive director and CEO. "For them, it matters whether foods are genetically engineered, or produced using practices that are good for their families. Price is still an issue."

Factors that contributed to an increase in organic food sales include the recession's slow recovery, consumer price inflation due to input price increases and increased desire for convenience products. Of all foods, fruits and vegetables contributed about 50 percent of new growth. However, the fastest-growing sector was meat, fish & poultry, posting 13 percent growth over 2010 sales, but still remaining the smallest of the eight organic food categories, according to the report.

Organic sales projected to grow by 9% in 2012 and beyond

According to the OTA, consumer choice is fueling the organic industry's growth and shows no signs of stopping anytime soon. Survey data indicates that sales of organic food and non-food items will continue to grow at levels of 9 percent or higher.

Organic farms are operated in all 50 states with 17,600 certified organic farms, ranches and businesses nationwide, reports the OTA. More than 78 percent of U.S. families are buying organic, but as that number increases, so, too, will organic businesses.

Organic's growth is undoubtedly good for consumers, but also good for the economy. Said OTA's Bushway: "With 94 percent of organic operations nationwide planning to maintain or increase employment in 2012, the organic sector will continue to fuel jobs, rural economies and consumer choice."

It helps that organic farms are 35 percent more profitable than conventional farms, but as true organic industry advocates know, growing organic is a passionate affair, with profit further fueling the aspiration to bring more clean food and goods to more people. The cycle continues as organics expand into private label products and continue their creep into conventional big box stores such as Walmart. Expect to see more choices in more places—and more profit for organic businesses.

But more education is needed to reach the 22 percent who currently aren't buying organic. "The average consumer is not sure what organic means,” said Myra Goodman, co-founder of Earthbound Farm. To grow organic's reach, “we need to educate consumers that organic is a better value: It protects the environment, it protects their health. It solves so many of our problems.”

What will it take for organic growth to explode in 2013? Tell us in the comments.