HomeNewsThis Week in (Fake) Nutrition History
Recent
Latest
4 tips to get ahead of chemical concerns in packaging
May 20, 2022
7 CBD favorites in the increasingly popular gummies format
May 20, 2022
Mission MightyMe helps parents introduce allergens to babies
May 20, 2022
UNFI's Eric Dorne to step down as chief operating officer
May 20, 2022
Trending
Whole Foods' honors 30 companies with 10th annual Supplier Awards
May 18, 2022
Getting ready for 2023: Trends for brands to consider
May 17, 2022
Sponsored Content
The rise of sustainable business – eGuide
Sponsored Content
Natural beauty market trends
Jun 16, 2021

This Week in (Fake) Nutrition History

History is filled with momentous events that never happened. Each week we take a look back at how the evolution of American nutrition didn&#39;t change. 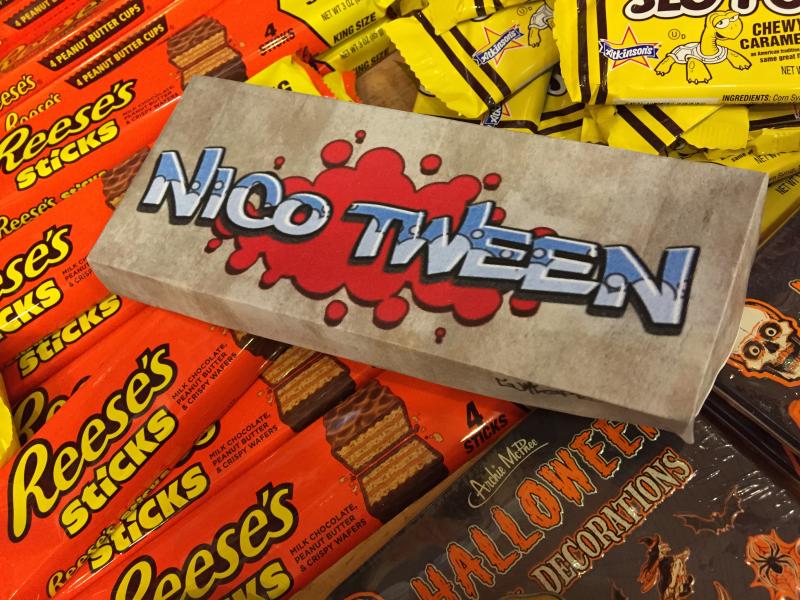 Anti-smoking forces did a double take in 2011 when Wrigley released it’s “NicoTween”™ gum claiming the nicotine-laced candy would help keep pre-teen children from taking up the dirty habit.

Though the dosage was quite low—it would take 17 sticks of Nico Tween to equal a single cigarette—then-Surgeon General Regina Benjamin came out loudly against the confection as a “gateway candy” that would undoubtedly lead kids to “harder stuff.” When asked what he meant, Benjamin remarked “You know, like Swedish Fish. Those things are totally addictive.” Wrigley responded to critics by pointing to numerous brands selling candy cigarettes, but quietly removed NicoTween from the market.

Conservative radio commentator Ari Sharp decried the controversy, saying the “nanny state should have better things to do than decide what kind of gum our kids can chew.” Sharp called Benjamin’s statements. “worse than the Nazis” “First they came for my gum drops, and I did not speak out because I don’t really care for gum drops. Then they came for my black licorice, and I’m, like ‘So what? I don’t even like licorice.’ When they come for my cherry Starbursts, it’s gonna’ be like Benghazi all over again!” 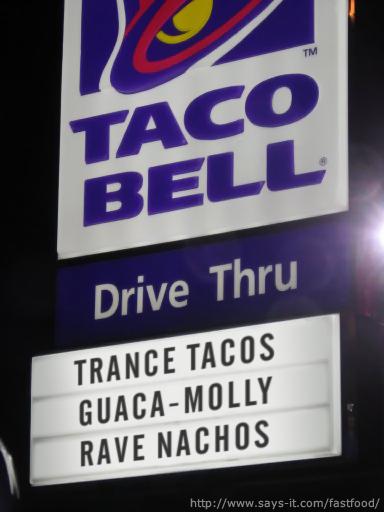 “Rave culture” was the rage in the early ‘90s, with references showing up everywhere from “Beverly Hills 90210” to an alarmist Newsweek cover story: “It’s 4 a.m.--Do You Know What Color Body Paint Your Children Are Wearing?”

In September of 1994, Taco Bell made a misguided attempt to capitalize on the craze with its special “All Nighter!” menu, featuring the items like the Trance Tacos and even including psychedelic sequined kaleidoscope hologram glasses in the Trippin’ Tykes kids meal. The campaign faced an immediate and a fierce backlash from parenting groups accusing the chain of encouraging drug use and dangerous behavior. MADG, Mothers Against Day Glo, took issue with the Guaca-Molly nachos, calling it a reference to MDMA, a street drug referred to by users as “Molly.” Taco Bell hastily responded by introducing a cartoon character, Guacan’ Molly, but the move earned even more attention from the media with “60 Minutes” commentator Andy Rooney describing the character as “Carmen Miranda’s demented sister.”

Taco Bell cut its losses at that point, pulling the rave-reference menu and introducing the more sedate Goin’ Roast-al campaign. 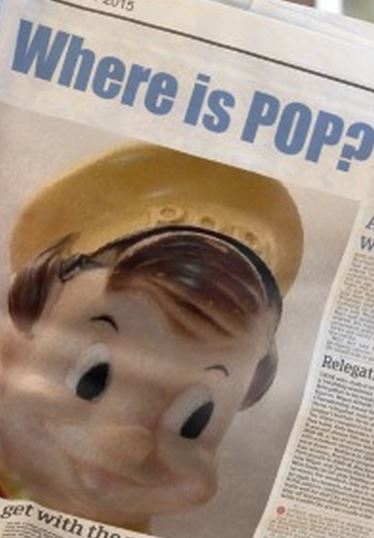 As the school year began in 1969, the question on kindergarten campuses across the country was the fate of enigmatic cereal mascot Pop, long accepted as “the cute one” in the Snap, Crackle, Pop trio and suddenly rumored to be dead, replaced by a lookalike. The rumor/conspiracy theory got its start when early anti-carb zealot Oliver Stone called into a college radio program claiming to have discovered clues in a Kellogg’s Rice Krispies commercial that proved “Pop is dead.”

Stone alleged that the clues included:

Kellogg’s was slow to react to the budding legend but eventually issued a press release stating that “Pop is alive and well,” also noting that “Pop is not, and never was, ‘the Walrus.’” The company attributed “misperceptions” in the commercial to an “overly-creative leftist art director” at the ad agency. The cereal giant later released a special series of “Long Live Pop!” boxes of Rice Krispies, while quietly pulling the “Toucan Son of Sam” mascot from circulation.

The story is recounted in detail in Shear’s Cereal Shenanigans: How Cap’n Crunch Faked His War Record and Why Tony the Tiger is Not So Grrreat. 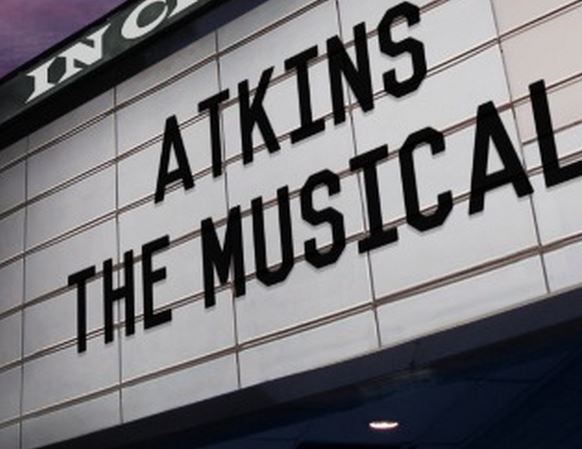 At the height of the low-carb craze in the early 2000s, Robert Atkins was the go-to diet guru, but "Atkins: the Musical" may have been a jump-the-shark moment (though sharks are famously high protein). Staged Off Broadway, the musical was a small but infamous flop, and some attribute the resulting ridicule to deflating the low-carb bubble. The soundtrack, still available on iTunes, features such numbers as:

It’s My Party and I’ll Fry If I Want To,

Smoke on the Trotter

I Wanna Be Serrated

Beef Or the Next Teardrop Falls

The Lamb Fries Down on Broadway

I Wanna’ Hold Your Ham

50 Ways to Love Your Liver

Every Roast Has Its Thorn

Wish You Were Hare

Another One Bites the Duck

I Fought the Lard (And the Lard Won)

Meat Me in St. Louis 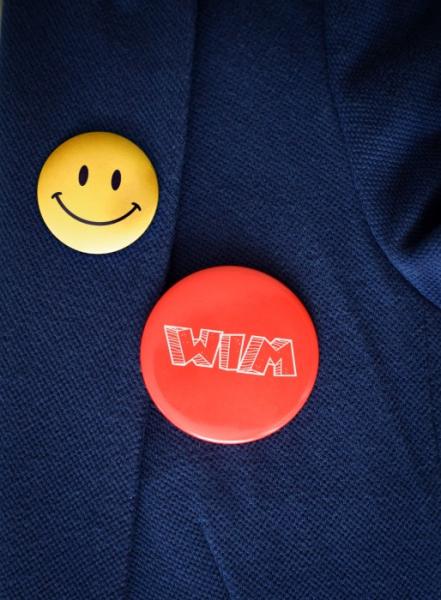 Long before gluten-free, healthy living advocates were promoting “Wheat In Moderation,” urging concerned consumers to avoid “The Bread Menace.” Though funded by the National Rice Council, the campaign was portrayed as a grassroots, health-minded movement.

Unfortunately for its sponsors, Wheat In Moderation launched just weeks before President Gerald Ford unveiled the Whip Inflation Now campaign in a much-ridiculed national TV address. The Rice Council had printed thousands of WIM buttons, only to have them mistaken for the millions of WIN buttons distributed by the Ford Administration.

Wheat In Moderation was suddenly seen as an exploitive maneuver connected to an unpopular president, and the WIM/WIN confusion brought unwanted attention from the alternative press, exposing the “movement” as an attempt by a Big Ag sector to manipulate the market. Though still occasionally seen at co-op board meetings in the Pacific Northwest, the WIM buttons are considered an artifact from an embarrassing chapter in the history of natural foods marketing. The bulk of the buttons are buried in a landfill at an undisclosed location near Modesto.

1968: Why there is no Tang block in the Food Pyramid 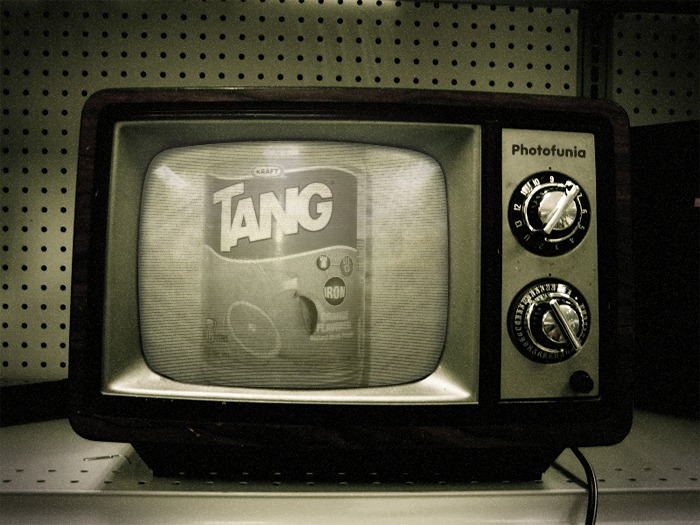 A proposal to give astronaut nutritional drink Tang its own block in the USDA Food Pyramid led to a minor standoff in the House of Representatives in 1968.

Rep.  Allen Dunn, D-NJ, attached the change to an agricultural appropriations bill, saying “What’s good for our courageous astronauts is good for the next generation of Americans who are bound to go into space and beyond.”  Dunn, whose district is home to Tang maker General Foods,” called the drink mix “the pinnacle of nutrition science in the 20th century.”

The measure was expected to pass without comment, but Dunn saw his proposal stripped from the bill after objections from Florida Republican Rep. Tom Peters. “American’s already have access to the perfect nutritional drink,” Peters said from the House floor. “In my state, we call it orange juice.” Peters called Dunn’s proposal “absurd.” “Those astronauts blast off  from Florida,” Peters said. “But Floridians know we don’t need a non-juice that’s colored orange. We need a real juice that is orange.” 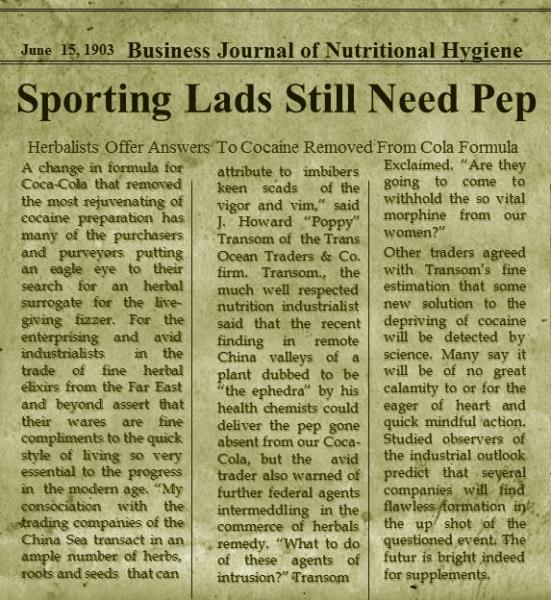 1903: The first decade of the 20th century was a heady era of bold ambition in a nation just beginning to find its feet as a world power. Various elixirs and formulas were accepted as an integral tool in a modern off-the-farm lifestyle in the growing cities of industry. When Coca Cola removed cocaine from its recipe in 1903, herbalists moved to fill the gap.

1953: Did High Fructose Corn Syrup Save Americans from Communism? 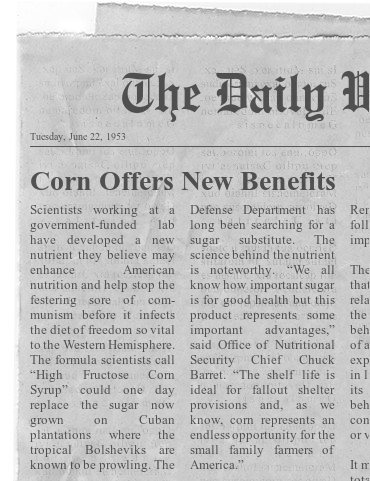 When high fructose corn syrup came out of the lab in 1953, it was hailed as a victory for food science and western capitalism. 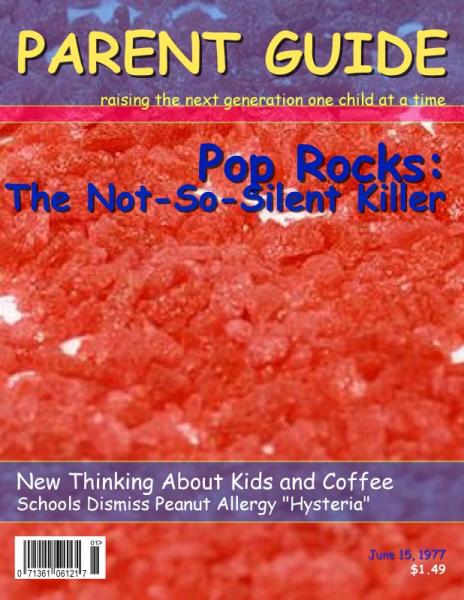 Reports of injuries related to Pop Rocks candy had parents on edge in 1977, leading many school districts to ban the candy and some municipalities to restrict the sale where carbonated beverages were sold. The risk made headlines when the North Carolina legislature moved to prohibit sales to minors.