This week: New products from Nutpods, Oatmega, Tessemae's and more 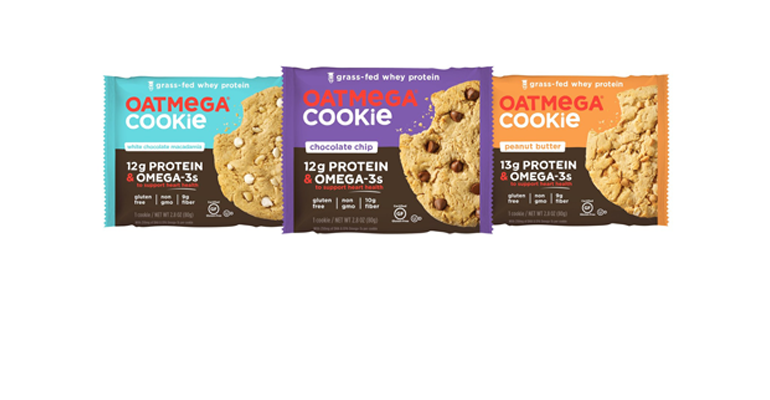 Plant-based dairy alternative beverage brand Nutpods announced via press release the introduction of new packaging for its popular non-dairy creamer: a 16 fl. oz. refrigerated format that will be available at retailers starting September 2017. The brand will launch this new packaging with Nutpods’ signature “Original/Unsweetened” flavor with a suggested retail price of $3.99. As with all other Nutpods creamers, the new 16 fl. oz. refrigerated product is certified non-GMO, Whole30 Approved and is also vegan, carrageenan free and gluten free. The packaging is fully recyclable.

Oatmega, part of the Amplify Snack Brands' portfolio of better-for-you snacks, said in a press release it was launching new grass-fed whey protein cookies. Just like the brand's protein bars, Oatmega Cookie is made with grass-fed whey that comes from happy, grazing New Zealand cows that are pasture-raised and antibiotic-free. Each cookie contains 12 to 13 grams of protein, a daily dose (250 mg) of DHA & EPA omega-3s, and is certified gluten-free and non-GMO. Oatmega Cookie are available in three delicious flavors, including Chocolate Chip, Peanut Butter and White Chocolate Macadamia.

To meet growing global demands for all-natural, clean-label sweetening systems, Steviva Ingredients has opened two new facilities: a manufacturing and distribution center in Salinas, Spain, and a new headquarters in Portland, Oregon. Steviva says that in less than a year, it has outgrown its headquarters in Portland and will relocate to a location twice as large as its previous space.

Steve Henig, former CSO of Herbalife, has joined Biova’s board of directors, according to a news release from the company. Henig has served as the chief technical and scientific officer of four major global companies in the last four decades. He has a proven track record in building high-performance organizations that generated numerous new products and technology platforms enabling innovation and major cost savings.

Pharmore Ingredients announced that it has been awarded a 2017 NASC MVP Supplier of the Year Award. This award is given by the NASC board of directors during the annual member conference. Performance measurements include delivery of excellence in products and services; continuing education to the industry through webinars and presentations; and support and service to individual companies.

Tessemae's has developed a full line of organic condiments to be merchandised in the produce department alongside its current salad dressing line-up. The portfolio includes buffalo sauces, mayonnaise, mustards, BBQ sauce and ketchup. The organic ketchup and organic BBQ sauce are vegan and contain zero added sugars. Tessemae's said in a press release it will be launching the condiment line in multiple Kroger divisions this month and with other key retail partners throughout the rest of the year.

Morini Brands announced in a press release the introduction of Ground Risofu (pronounced rhee-ZOE-foo), a rice-based meat alternative, packaged in a ground format, designed for those who want to eat better but are bored with the less-than-inspired, pre-flavored and pre-formed foods that currently dominate the analogue meat category. Morini says Risofu has similar protein and nutrient content to that of meat without the saturated fats and cholesterol, plus is vegan and free of the top eight allergens. It's currently available in 5 lb. packages for foodservice operators and chefs; later this summer, the company will roll out a one-pound, retail-ready package designed to be merchandised in the traditional retail meat case.