What's the fix for the US plastic waste pileup? 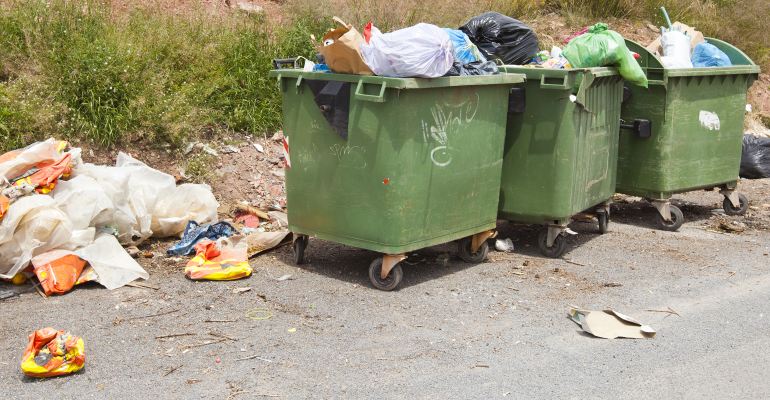 The U.S. CPG industry plays an enormous role in generating excess plastic waste. Find out more about potential solutions to the problem at large.

The U.S. generates more plastic waste than any country worldwide, having cranked out an estimated 42 million metric tons of it in 2016 alone, according to a recent study published in Science Advances. That figure is likely even higher today, says Kara Lavender Law, the lead study author and a professor at the Sea Education Association.

“Our estimate is based on the latest available data [some of which is seven years old], and we were conservative. Meanwhile, we have seen waste generation grow yearly,” Law says.

This newest chapter in the story of U.S. plastic waste has brought attention to two quandaries. One is the country’s contribution to a global waste problem. The other dilemma is an increasingly inundated domestic waste management system as overseas markets shrink, with some countries who historically received tons of our mixed, dirty bales now refusing them.

After crunching the U.S. waste generation numbers, Law and her colleagues set out to answer the question: What happens with this mountain of plastic trash? Research shows that less than 7% of it is recycled–so where does the rest go?

The study authors determined that approximately 1 million metric tons of plastic scrap was illegally dumped or ended up in the environment as litter in the United States. And most of what’s collected for recycling was exported, with up to an additional 1 million metric tons released to the environment overseas, upending the U.S. EPA’s claim that Asia is responsible for 60% of all marine litter.

In 2016 the U.S. sent contaminated plastic bales to 89 countries, which was classified as recycled material, whether it was processed and put to use or not. About 89% of those countries on the receiving end have insufficient waste management infrastructure, based on World Bank data.

Based on consultants’ assessments of content of plastic bales at materials recovery facilities, Law and colleagues estimated that 15 to 25% of it was likely pulled by the importer due to contamination.  The valueless portion believed to be tossed was estimated to be up to 1 million metric tons, though this staggering figure is an educated guess.

“Since we do not know with certainty what happened once it got to China or elsewhere, we have to make inferences about the amount that went into the environment based on anecdotes on open dumping and/or burning. But we are confident in our contamination estimates,” Law says.

Some countries are pushing back. China has all but closed the doors on plastics exports, accelerating the pileup of mixed plastics originating on this side of the sea.

Then on Jan. 1, 2021, amendments to the Basel Convention imposed strict controls on “mixed” and “dirty” plastics sent to 187 countries, including outright bans on materials from some countries. In response, parties from around the world have pledged to stop shipping these materials overseas. But the U.S. is among eight nations that did not commit to the international treaty; consequently, those who signed on will no longer take mixed or contaminated plastic from the U.S. without a special agreement. Such an agreement with developing countries would be unlikely, as the U.S. would be one of the richest nations passing its waste on to poor countries, which would be politically unacceptable now that the material is listed as “Basel controlled waste,” according to Jim Puckett, executive director of the Basel Action Network (BAN).

United Nations data show that the U.S.  exported 66% less plastic in 2019 than 2016, mainly due to China’s ban on materials with more than 0.5% contamination. It is early to gauge the further impact that could result from the Basel Amendment. But for now, U.S. shipments to some developing countries have actually increased as brokers target other regions where they can still send low-value plastics.

From January to August 2020 plastic waste exports to Asia spiked 32%, hitting a record high in August 2020, with a few poor countries receiving most of it, according to a U.S. export database of the Census Bureau.

“While overall plastic exports are down–from 2.26 million tons in 2012 to 0.69 tons in 2020, the U.S. is flooding Malaysia, Thailand, Viet Nam and Mexico who are now receiving more of it than ever,” says Jan Dell, an engineer and founder of The Last Beach Cleanup, a nongovernmental organization (NGO) working to cut plastic pollution.

Dell asserts that the recent study of Law and colleagues, citing U.S. exports of contaminated plastic, is tell-tale.

“But these study figures show that we should not be blaming them. Our waste is actually contributing to their pollution. And SOS 2.0’s efforts to curb the problem are inadequate. Two major sources of plastic pollution are U.S. plastic waste exports to non-OCED (Organisation for Economic Co-operation and Development) countries and single-use plastics. SOS 2.0 does nothing to stop either one,” she attests.

Puckett concurs, stating that SOS 2.0 puts no onus on the plastics industry to produce sustainable materials, but rather prioritizes dealing with plastic once it’s wasted.

He suggests a threefold solution: 1) eliminating “unessential” single-use plastics and “harmful” additives; 2) using only polymers that can be recycled without down-cycling or adding virgin plastics; and 3) ensuring that when plastics can be “safely and truly recycled” their use be required in new products, and only when there is viable collection infrastructure.

Steve Alexander, president and CEO of the Association of Plastic Recyclers, like Puckett, attests that recycling is not solving the problems–at least not today. The current collection and sortation infrastructure is too overwhelmed by a fast-growing and continually evolving stream, he says. But he does think recycling can be a part of the solution, with some fixes.

Alexander spoke mainly of plastic packaging, commenting, “First, and foremost, it needs to be designed for recyclability … with companies committing to ensuring their packaging meets design for recycling protocols. We also need to collect and sort more material. And we need to create market demand for the recycled product to monetize the system [to pay for infrastructure upgrades], and ultimately to provide a connection to the circular economy.”

What will not work, Alexander believes, is product bans and unrealistic recycling goals.

[Proposal of those two approaches] provides great sound bites, but the reality is there will always be packaging to be collected, sorted and processed. We need a system that can allow that.”

In the meantime, Dell is working with the Basel Action Network to stop the flow of exported waste plastic.

In 2019 her NGO, along with Greenpeace USA, Plastic Pollution Coalition and Beyond Plastics, called on 54 U.S. waste and recycling companies to publicly commit to stop exporting plastic waste. Four of them have since done so: Casella, Republic Services, Waste Management and Recology, though Recology pledged to stop sending only mixed plastics. An additional three companies stated they have never exported the material and would not in the future.

How the natural products industry is reshaping the plastic problem
May 26, 2020