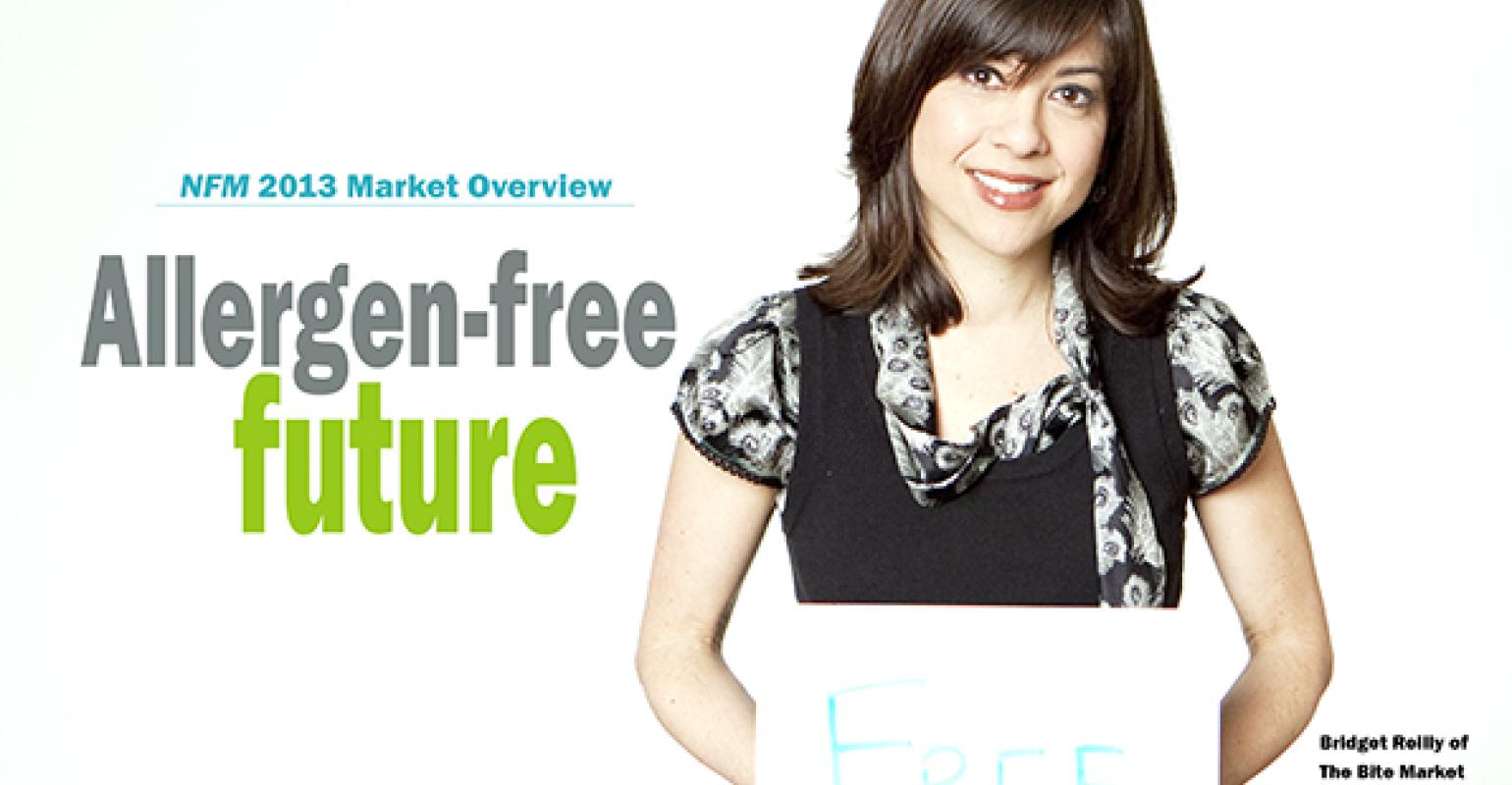 As the &lsquo;free from&rsquo; market grows at natural foods stores and specialty outlets like Bridget Reilly&rsquo;s The Bite Market, a question arises: Why are we more allergic to our food? 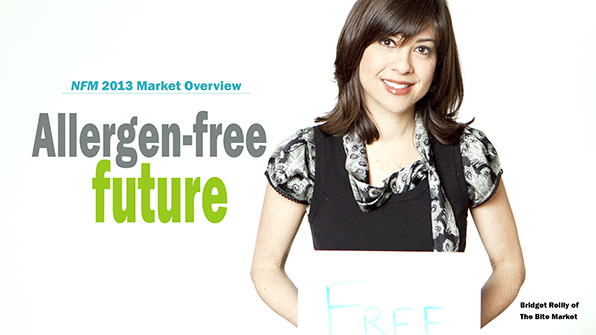 Parents of young children know that when introducing solid foods, the “big eight” allergens—milk, eggs, peanuts, tree nuts, fish, shellfish, soy and wheat—should be avoided for at least the first year. Then, once kids are comfortable eating single-grain cereals, parents can gradually give them allergen foods one at time, paying close attention for any
adverse reactions.

But what if this practice were all wrong? Since the American Academy of Pediatrics introduced this guideline nearly 15 years ago, allergy incidence has continued to grow. Could shielding babies from potential allergens actually be exacerbating the problem? Unfortunately, researchers and doctors simply don’t know. While there are many different theories as to why food allergies are increasing, experts agree that a decrease, or even a leveling off, is not on the horizon.

Therefore, as more parents address their kids’ allergies—and perhaps discover their own food intolerances—the market for free-from products continues to blow up. We’ve seen clear evidence of this in recent years:

Sales of nondairy beverages increased 21 percent in the natural channel to $43.6 million, up from $36 million, in the year ended February 2012, according to SPINS. Certified-gluten-free foods showed similar growth, rising 21.8 percent to $241.2 million, up from $198 million.

When you take a closer look at statistics, the “free from” market’s explosion makes sense. For starters, one in every 17 children now has some form of food allergy, says Robyn O’Brien, founder of The Allergy Kids Foundation and author of The Unhealthy Truth (Three Rivers, 2010). And between 1997 and 2002, the number of hospitalizations related to allergic reactions to food increased by a whopping 265 percent. Also fueling growth is the significant uptick in adults identifying their own food intolerances. While the number of grownups living with food sensitivities is not currently tracked, “practically everyone has some kind of [food] intolerance,” says Charles Cattano, MD, a gastroenterologist and chief of medicine at Anne Arundel Medical Center in Annapolis, Md. But of these people, how many actually realize their intolerance and also take action? Apparently, enough of them to positively impact free-from product sales.

The hygiene hypothesis, introduced in 1989, remains the most research-backed and widely accepted theory to explain the increase in food allergies. Essentially, it states that we’re too clean. Because we’re not exposing children to enough germs, their immune systems aren’t trained to tell the difference between harmless and harmful agents. “This really holds up when you look around the world and see that allergies are very uncommon in underdeveloped countries,” says Robert Wood, MD, professor of pediatrics and chief of pediatric allergy and immunology at Johns Hopkins Children’s Center in Baltimore.

To better equip young immune systems, the American Academy of Pediatrics did a U-turn in 2008 and began advising parents to introduce allergen foods as early as 4 months. However, the previous recommendation of one year has already been so widely adopted and remains largely unquestioned, says Alan Greene, MD, a pediatrician at Lucille Packard Children’s Hospital in Palo Alto, Calif., and author of Raising Baby Green (Jossey-Bass, 2007).

Consumer advocates also agree that the hygiene theory is likely only one piece of the puzzle. “If you’re going to address the issue from this Purell angle, you must also look at how foods are produced,” O’Brien says. “The fact is we’re pouring chlorine on the animals we eat. What is that doing to our immune systems? We just don’t know.”

Genetically modified foods, which are artificially injected with bacteria, viruses and other genes to promote specific traits, are another unknown. Because these foods are so pervasive, it’s practically impossible to conduct human trials on the effects of consumption. Although European animal studies have linked eating GM foods to allergenicity, this research has largely been dismissed in the U.S. because of inadequacies in design, reporting or analysis.

Still, wary researchers say it’s hard to ignore that the dramatic increase in food allergies, which started in the 1990s, coincides time-wise with GM crop introduction. “Again, it begs the question: Are we allergic to the food, or are we allergic to what we’ve done to it?” O’Brien says.

Lack of vitamin D because more children now play indoors and receive too much folate in utero is another theory as to why we’re seeing an increase.

On the bright side, more questions about food allergies and intolerances spell more opportunities for natural products retailers. Take Bridget Reilly, who, after discovering her own food intolerances, opened The Bite Market in Orange, Calif., in 2010. The 100 percent dairy- and gluten-free store caters to food-sensitive shoppers hunting for information and meal solutions.

From the start, Reilly built relationships with local nutritionists and doctors who now refer clients to her store. Her business continues to grow, and it’s not just thanks to the gluten- and dairy-free crowds. Shoppers with all types of food sensitivities are drawn to The Bite because the store values their needs.

Reilly knows firsthand that shopping with a food sensitivity can feel like a chore, so she works one-on-one with customers, listening to their stories and helping them identify products that align with their dietary needs. “When people first come in, they often have the deer-in-headlights look,” she says. “Most have been eating everything much of their lives, and now they’re on a restricted diet. That can be scary.”

Stocking for what's next

Reilly regularly sees shoppers who have sensitivities beyond the big eight allergens, such as aversions to cinnamon and even rice. But she says another culprit is coming up more frequently: corn, which many say is an obvious next major allergen.

“Corn popped up pretty early on in my research and is what caused me to start looking at genetically modified foods,” O’Brien says. “It was totally underreported.” While there is little data on the prevalence of corn allergies, it’s not because they don’t exist. Rather, they often go unrecognized, Greene says. Unlike gluten or even soy, corn is not easily detected on food labels because it can appear as more than 50 monikers in various ingredients, so consumers can’t as easily pinpoint the source of their problems.

Of course, corn won’t be able to fly under the radar for long. Even if it’s never considered a top allergen, if consumers start associating corn with the myriad symptoms that accompany food intolerances, they’ll soon start hunting for corn-free products. If that happens, manufacturers will drive the market by labeling the ingredient themselves, Greene suspects.

But corn is just the tip of the iceberg as far as which new allergens and intolerances we might see in the future. “The big eight is definitely outdated,” Greene says. “It’s been around for as long I’ve worked in this field. We now know that consumers with one allergy generally have multiple, and we’re starting to see previously unheard-of combinations. This again begs the question of why.”

The most obvious answer points back to the hygiene hypothesis. Our bodies simply are not equipped to break down and digest new foreign foods, O’Brien says. A 2008 study published in the Journal of Allergy Clinical Immunology supports this idea, showing that children in England are 10 times more likely to have peanut allergies than kids in Israel. After following up with parents in each country, researchers discovered that it’s common practice in Israel to give babies foods that contain peanuts before they are 6 months old.

Trials currently being conducted in the U.K. and Australia are splitting children into two groups, giving one group highly allergenic foods at an early age. Results are anticipated early next year, and depending on the findings, Greene suspects manufacturer-developed “allergen foods” may not be far off. Such products may encourage American parents to consider introducing these foods at an earlier age.

“Intentionally finding ways to give babies a diverse offering of foods may be the most immediate solution,” he says. “Currently, there are no allergens in baby foods, but I think it may be time to adjust our thinking.”

Keeping up is a key opportunity for natural products retailers.

Retailer Roundtable: What standards do you look for in gluten-free products?
Apr 25, 2013