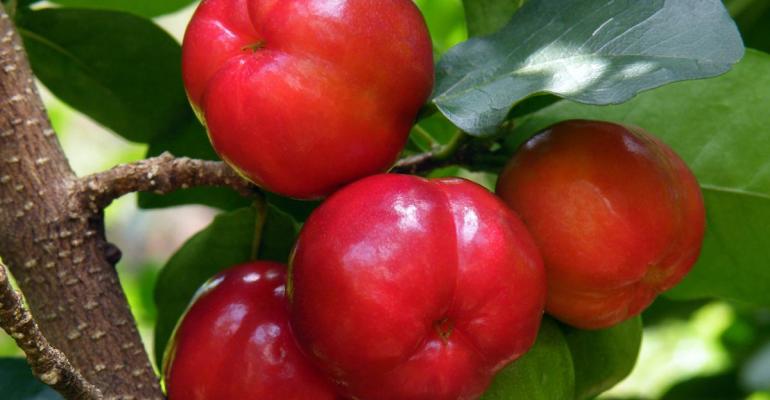 The American Botanical Council (ABC) is pleased to announce that DIANA, FOOD, a supplier of natural ingredient solutions based in France, has adopted acerola fruit through ABC’s Adopt-an-Herb Program.

DIANA, FOOD’s three-year commitment helps ABC keep its HerbMedPro™ database up to date with the latest scientific and clinical research on acerola, also known as Barbados cherry and West Indian cherry, a popular traditional food and ingredient in dietary supplements. HerbMedPro is an interactive and comprehensive database available on ABC’s website that provides access to important scientific and clinical research data underlying the use of nearly 250 herbs and their effects on human health.

“ABC is deeply grateful to our friends at DIANA, FOOD for adopting acerola so we can keep up with scientific research papers on it in ABC’s HerbMedPro database,” said ABC Founder and Executive Director Mark Blumenthal. “This fruit has been a staple in dietary supplements—e.g., vitamin C formulations—for decades, and we greatly appreciate DIANA’s commitment to supporting scientific research and education on this versatile food.”

About Acerola
Acerola is the common name assigned to two species in the tropical family Malpighiaceae—Malpighia emarginata and M. glabra. Both are called Barbados cherry and West Indian cherry by various sources that are not always in agreement as to which is which.

Acerola fruit is high in vitamin C, surpassed by only a few other plant sources. While often used as a food to make juice, jams, jellies, ice cream, pies, preserves, and liqueurs, acerola is also a component of dietary supplement products in the United States, and is eaten as a natural remedy, particularly in Brazil, the world’s biggest producer of acerola.

In laboratory experiments, acerola has exhibited a wide variety of biological activities, including antioxidant, anti-inflammatory, antibacterial and antifungal, among others.

While there are few human clinical studies on acerola, since it is consumed mainly as food, some studies have shown it to possess beneficial health effects. For example, acerola products and combined preparations have demonstrated the ability to help treat respiratory tract infections in children and to promote the absorption of vitamin C in blood plasma. An acerola product also has been shown to counteract the effects of aging of the skin; participants in the study experienced gradual and significant clinical improvement in wrinkles, fine lines, redness, hydration, sebum and smoothness with daily use.

Acerola (the M. glabra species) is native to southern Mexico, Central America, and the northern region of South America. Malphigia emarginata is native to the Caribbean and neighboring northern South America as far south as Brazil. Both are large shrubs or small trees that grow to 20 feet tall, and both produce pink-to-lavender flowers followed by bright red drupes (stone fruits). The fruit of both species is used interchangeably and is round, ½-1 inch (1.25-2.5 cm) in diameter, with juicy, acidic pulp.

More information on acerola can be found in the Fall 2014 issue of HerbalGram, here.

About Adopt-an-Herb and HerbMedPro
DIANA, FOOD joins 28 herb- and plant-based ingredient companies that support ongoing educational efforts through ABC’s Adopt-an-Herb Program to collect, organize, and disseminate reliable, traditional, science-based, and clinical information on herbs, medicinal plants, and other botanical- and fungal-based ingredients. Adopt-an-Herb encourages companies and individuals to “adopt” one or more specific herbs for inclusion and ongoing maintenance in the HerbMedPro database. To date, 30 herbs have been adopted.

HerbMedPro provides online access to abstracts of scientific and clinical publications on nearly 250 commonly used medicinal herbs. Each adopted herb is continuously researched for new articles and studies, ensuring that its HerbMedPro record stays current and robust. The result is an unparalleled resource—not only for researchers, health professionals, industry, and consumers, but for all members of the herbal and dietary supplements community, and others—available via ABC’s information-rich website.

HerbMedPro is available to ABC members at the Academic level and higher; its sister site HerbMed® is free and available to the general public. Making this unique resource free to the public increases the number of people who benefit from updated information on herbs, in accordance with ABC’s nonprofit educational mission.

In keeping with ABC's position as an independent nonprofit organization, herb adopters do not influence the scientific information that is compiled for their respective adopted herbs.