This Is Your Brain on Omega-3s

The drumbeat on omega-3s in the consumer mind rarely varies. Omega-3s are good for your heart. Everybody knows that. Just about everybody believes it. In the consumer’s view, omega-3s equals heart disease prevention.

Now, for a variety of reasons, brain benefits of omega-3s are creeping in more confidently from the edges. That stage is set in part by Baby Boomers passing the milestone of 65 years, panicking about cognitive decline every time they misplace their keys, and eager parents—maybe even desperate parents—hoping for alternatives to Ritalin for children diagnosed with ADHD. The brain could be fertile territory for a nutrient knocked off the pedestal last year by a widely publicized report linking high omega-3s in the blood to prostate cancer, and other studies questioning benefits for the heart. NBJ sales estimates have the
category down a brutal 11% after years of laudable growth. 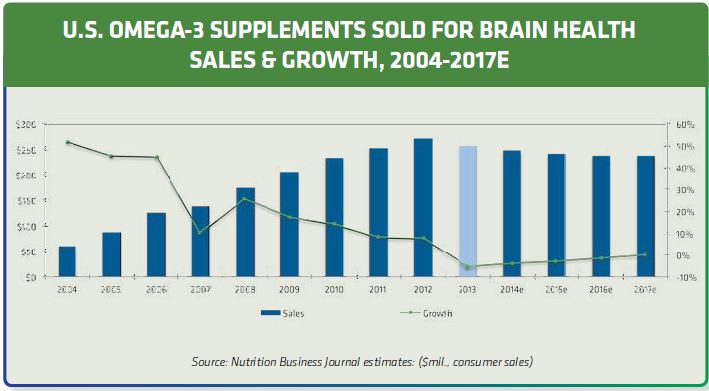 Will Black, marketing vice president at DSM, which made a $1.1 billion acquisition of algae-derived omega-3 outfit Martek in 2010 to begin a string of fatty-acid plays, says the company’s consumer research shows heart health is still the biggest perceived benefit. “The message came back pretty resoundingly that the consumer still values omega-3s around a hearth-health benefit.” But the brain was second.

“That has a lot to do with where the science and history of messaging is,” Black says. Black calls omega-3s “one of the most studied nutrients in history,” but notes that cognitive benefits lag in research and awareness. Industry insiders talk about an emerging “quality of life” trend with consumers not only concerned about prevention but maintenance. Everybody is going to die someday, but nobody wants those last years to include reduced ability of any kind, especially dementia. That trend fits nicely with growing evidence of omega-3 brain benefits. “That’s why we are going to continue to see more work, more investment in that benefit platform,” Black says.

Mike Lewis doesn’t need to see more research. A retired military doctor, Lewis has studied omega-3s in head injury cases—“One of the legacies coming out of Iraq and Afghanistan is how we treat brain injury,” he says—and is convinced benefits accrue far beyond recovery from traumatic brain injury. He recommends adults start with dosages as high as 15 1,000mg capsules a day. He gives his own teenagers “four to five” 1,000mg capsules a day. He points to three principal benefits: mental clarity, calmness and energy. He calls the research solid and the risks low. “Other than the cost, you have nothing to lose,” says Lewis.

Lewis says patients see a nearly immediate result. “Usually by the second day, I get an email or a phone call basically saying, ‘Wow. I didn’t know I could feel this good.’” That is not the sort of response a supplement company would tout, of course. Claims are complicated and cognition claims are often the most complicated of all.

DSM’s Martek and i-Health brands found that out with BrainStrong Adult. In June, the Federal Trade Commission reached a settlement with the brands, prohibiting claims for improved memory and the prevention of cognitive decline “unless the representation is non-misleading and, at the time of such representation, Respondents possess and rely upon competent and reliable scientific evidence.”

At the time, regulatory lawyer Todd Harrison of Venable LLC, called the decree “a shot through the heart” of the supplements industry, contending that a randomized study with 354 subjects was “robust” and sufficient substantiation. According to Natural Products Association president Dan Fabricant, the study missed the target due to design and not FTC intransigence. The ruling illustrates a challenge common across the supplement industry, he says. “It was shotgun. It was scatter shot,” Fabricant says of the study. “You have to be more laser focused.” According to the former FDA supplements enforcement chief, the clinical end points were not specific, and he sees that regularly. “Cognitive function? What does that mean?” says Fabricant.

FTC and FDA are asking the same question, Fabricant says. “It’s an area where there is a lot of activity right now, so they put the microscope on it.” Corey Hilmas, who followed  Fabricant from the FDA and is now the NPA’s lead on science and regulatory affairs, charges that “a lot of the claims are more marketing driven than clinically driven,” explaining that a good trial might use rodents and a healthy randomized population, but more importantly very specific, verifiable results. The FTC divided memory into five components and claimed the DSM study did not provide evidence for all five.

The claims need to narrow dramatically, Hilmas says. Tying a broad “it’s good for the brain” finding to a specific condition or benefit doesn’t work. The end point must be a specific benefit to be used appropriately in the brain space, Hilmas says, but those claims are possible.  “When you say ‘mental clarity,’ it seems nebulous, but there are tests you can do on humans, tests you can do in animals.” When a company relies on meta-analysis reviewing multiple studies but leaves out the results that don’t support their argument, both the FDA and FTC see red flags, according to Fabricant and Hilmas.

They should know. They saw it at the FDA and say the smart companies often approached them about protocols before starting or citing studies. There is no reason, Fabricant says, that a well-designed study and carefully selected evidence could not lead to health claims that could drive the category in the brain space effectively through the  FDA’s health claim petition process. “If people were doing it, you’d have health claims by now,” Fabricant says. “You’d have it for heart. You’d have it for brain.”

Hiskias Keizer, a Netherlands scientist consulting with Stepan Lipid Nutrition on a branded omega-3 ingredient, says the evidence for brain benefit from fatty acids is accepted as fact in certain applications—infant nutrition for one. “Little babies still have to build their brains,” Keizer says. “It’s quite obvious that little babies need sufficient DHA to do that.” Translating that to a claim that omega-3s, DHA or EPA support brain function is more challenging, in part, he says, because the brain is so incredibly complex, perhaps especially at the molecular level where omega-3s interact with brain cells. Science has not established precisely how the brain uptakes DHA or EPA. “We don’t even know how a healthy brain functions,” he says.

Keizer helped develop the Stepan branded ingredient to increase bio-availability. “Our product has been treated with enzymes that pre-metabolize the triglycerides,” he says, explaining that the ingredient is refined with enzymes that keep the omega-3s fixed in the “second position” on the triglyceride—as it is found in fish oil before it is refined—and ideally positioned to be transported through the blood-brain barrier. “The transporter was recently discovered,” Keizer says. “We are quite confident it will help to make the DHA get to the brain.”

Enzymotec, through its Vayapharma division, approaches the problem from a different direction, linking DHA and EPA to phosphatidylserine (PS), creating a structure that is more readily used by the brain. The milligrams of omega-3s in the capsules, and the capsules themselves, seem miniscule compared to the 1,000mg horse pills common to the category, but the phosphatidylserine increases the bioavailability thus boosting the uptake dramatically. That process produces three products: Vayacog, a DHA product focused on cognitive health; Vayarin, also carrying DHA, designed to treat attention deficit hyperactivity disorder; and Vayarol with better absorption of EPA and DHA for cardiovascular disease. The company developed the products as medical foods, requiring them to pass FDA muster with all the expense involved in that, but allowing the company to make specific claims. The website for Vayarin proclaims the product “has been clinically shown to manage ADHD symptoms in children … with virtually no side effects.”

With anxiety about cognitive decline in aging populations and a growing wariness about Ritalin from parents of children diagnosed with ADHD, both populations may glean confidence from the prescription-required status of medical foods. It’s not a healthfood store shelf, it’s a pharmacy counter. That can make a product appear more bona fide to many consumers. Back in the over-the-counter world, brands are left to navigate outside the label for messaging. Claims cannot be made but evidence can be provided.

GOED, the Global Organization for EPA and DHA Omega-3s, is working on a campaign to return omega-3s to the unquestioned position they inhabited for so long by communicating directly to consumers. Studies proving heart benefits will be cited, but Rob Bailey, commercial development director for Stepan, says education efforts on omega-3 brain health will need to be multi-pronged. Doctors are an obvious source of information for consumers, but that channel is quickly followed by traditional media, social media, health bloggers and all the way down to family and friends. The evidence is good, he says. It just has to reach the consumer. “Generally they won’t make a decision based on one source,” Bailey says. “They want to see multiple positives and specific advice.”

Lewis says the study tying omega-3 blood levels to suicide among veterans reported across mainstream media got attention, and will get people to try high doses and have the experience that will ultimately sell the brain benefits. He recalls talking a Pentagon general into starting the high dosage regimen on a Thursday. “I get a call on Saturday morning saying the general is on the way to the store to buy more fish oil and asking which kind should he get.”