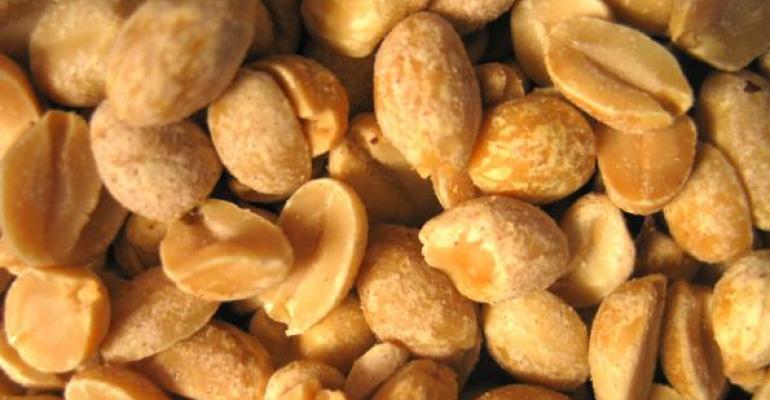 New research shows that including peanuts in a high-fat meal improved the post-meal triglyceride response and preserved endothelial function.

A study of peanut consumption showed that including them as a part of a high-fat meal improved the post-meal triglyceride response and preserved endothelial function.

“Peanuts are a healthy snack when eaten as part of a healthy diet,” said lead researcher Xiaoran Liu, a graduate student in the Department of Nutritional Sciences at The Pennsylvania State University.

The purpose of this research was to evaluate vascular function after a high fat meal challenge. Fifteen overweight males were randomized to either a peanut meal containing 3 ounces of ground peanuts (as a shake) or a control meal (a shake without peanuts) that were matched for energy and macronutrients.

The lipid profile, glucose and insulin were measured five times after each meal. Flow-mediated dilatation (FMD) was measured to assess vascular function. This non-invasive method required a cuff at the forearm to restrain blood flow, which was then released to assess dilation of the brachial artery. The control meal decreased FMD by 1.2 percent compared to baseline. In contrast, there was no decrease in FMD after the peanut meal. These results demonstrate that the peanut meal maintained normal vascular function whereas the high fat-matched control meal impaired vascular function acutely.

Vascular dysfunction plays a major role in the development of atherosclerosis and the formation of coronary plaques and lesions that lead to coronary artery disease. Typically after a high fat meal, vascular function is reduced, albeit temporarily, until the fat that is in the blood (from the meal) is cleared. Strategies that can blunt this response to both dietary fat and its effect on vascular dysfunction may decrease the risk of coronary disease. Our finding demonstrated that that peanut consumption was shown to be atheroprotective as a part of high fat meal.

“Previous studies have shown that individuals who consume peanuts more than two times a week have a lower risk of coronary heart disease,” said Liu. “This study indicates that the protective effect of peanut consumption could be due, in part, to its beneficial effect on artery health.”

Peanuts are nutrient dense and energy dense, so Liu noted the importance of being aware of their calorie content when incorporating them in the diet. Thus, peanuts must replace other food sources of calories when included in the diet. For example, peanuts can be substituted for high fat, nutrient-poor foods in the diet that contain solid fats.

Looking ahead, the Penn State group hopes to investigate the effects of peanut consumption on other risk factors including inflammatory markers. Liu is presenting the research at the American Society for Nutrition’s Scientific Sessions & Annual Meeting during EB 2015.

The study was supported by The Peanut Institute.