Are bison the answer to sustainable meat?

Buffalo may be the answer to our lust for beef thanks to the meat&rsquo;s sustainability, low fat content and reduced calories. But is this &ldquo;other red meat&rdquo; too good to be true?

Beef: We’ve had too much for dinner. Beyond chicken, red meat is our favorite at the table, with Americans consuming on average nearly 65 pounds of beef per person per year, according to the 2000 U.S. Census. It’s this love affair that experts suspect has contributed to a wealth of our health woes, including heart disease and cancer. 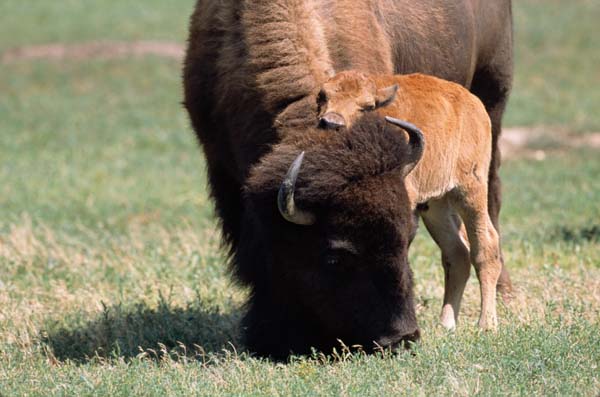 According to a decade-long study of more than 500,000 Americans published in 2009 in the Archives of Internal Medicine, “11 percent of deaths in men and 16 percent in women could be prevented if people decreased their red meat consumption by one-fifth.”

Still, even with this information, prying away our steak knives has not gone well. Americans eat nearly 8 ounces of meat a day—that’s double what the rest of the world consumes. And though the United States accounts for only 5 percent of the world’s population, we process 15 percent of the total meat supply, according to the United Nations’ Food and Agriculture Organization, which also estimates that U.S. livestock production generates nearly one-fifth of the world’s greenhouse gases.

What we need is a meat to meet us in the middle—something just as delicious as beef, easier on the arteries, that walks with a gentler environmental hoofprint. Indeed, another contender has slowly grazed its way into the spotlight, garnering attention from health- and eco-conscious consumers for doing just that. Buffalo (which should actually be called bison if they are from North America) may just be the answer to our lust for beef thanks to the meat’s sustainability, low fat content and reduced calories. But is this “other red meat” too good to be true?

Challenges of the bison biz

When ranchers Jason Stephens and Todd Gale purchased their first few head of bison in 2007, they weren’t aware of the animal’s nutritional attributes. Quite simply, they fell in the love with the beast.

“To me, they’re more a symbol of what America stands for than the bald eagle,” Stephens says. “They’re so intrinsically woven into the history of our country and exemplify a classic American ideal—freedom and adventure.”

The first few months, the men let the bison roam their 300-acre ranch near Larkspur, Colo., without a long-term plan. But after realizing their herd would eventually procreate to outgrow the acreage, Stephens and Gale concluded that “saving” the bison meant learning to process, market and sell the animals’ meat for profit.

At the time, bison was just beginning to hit its stride in the marketplace thanks, in part, to media mogul Ted Turner, who played a critical role in helping to popularize the meat by serving bison at his restaurant chain, Ted’s Montana Grill. Turner, a controversial figure in the bison world, sent prices for the animals sky high when he entered the industry in the ’90s and bought up most of the available livestock. Today, of the 225,000 bison in the United States, the National Bison Association estimates that Turner owns 50,000 of them.

Having grown up on a cattle farm in Pennsylvania, Stephens thought he had some idea of how to care for his new roaming herd. What he didn’t know was that the similarities between cattle and bison end largely at grazing and cud chewing.

Cattle have over time been genetically tampered with to be “meat wagons,” says Dave Carter, executive director of the National Bison Association. The result is an animal that’s largely dependent on ranchers for survival and general health. Bison, on the other hand, are native to North America and genetically unchanged from the herds that roamed the West and Great Plains until the end of the 19th century. Because they have naturally adapted to the environment, Carter says, they’re a much heartier animal that thrives with little, if any, assistance.

Among their key differences, bison are more resistant to disease and rarely require veterinary care or antibiotics, Carter says. They easily endure extreme climates—from New Mexico summers to Montana winters—without need for artificial shelter. And during calving season, when most cattle ranchers work long hours to help their heifers give birth, “in the bison industry, we have people who’ve been doing this for over 30 years and have never pulled a calf,” Carter says.

“It’s a joke that if ranchers do start raising bison, it’s the first time they can actually take their family on vacation,” Stephens says. “It’s no longer a 40-plus-hour work week—maybe 10.”

The hands-off approach does have a drawback. Ranchers must wait longer for a return on their investment because it’s illegal to use growth hormones on bison. The companies that developed the drugs never petitioned the U.S. Food and Drug Administration for approval to use the substance on bison, Carter says.

Because of this, it takes 24 to 30 months for a bison to be ready for processing, versus 14 to 20 months for a cow. Still, the payoff is significantly more—bison meat currently has a market value of $3.17 per pound, while conventional beef is only $1.60. Plus, bison live longer. A bison female may produce calves for her entire lifespan of up to 35 years. By the time they turn 15, Carter says, most beef cows are pretty old.

Better for us, better for the environment

Bison emit methane, but experts argue their positive environmental impact far offsets their negligible methane output. The animals roam as they eat and aren’t prone to overgrazing. They help promote a functional ecosystem by cropping native vegetation, fertilizing native grasses with manure and urine, and stirring seeds into the ground with their hooves as they move.

“They are absolutely essential to the ecology of the prairie,” says Kirk Gadzia, founder of Resource Management Services, a New Mexico-based consulting, training and monitoring organization for ranchers. While naturally occurring wildfires keep the prairie healthy by removing dead vegetation, preventing the invasion of trees and increasing the nutrients available in the soil, “we’re finding that fire alone without grazing is not enough to promote species diversity,” he says.

Bison provide plenty of health benefits for people as well. Although the animals primarily eat grass, some ranchers finish bison on corn to increase fat content before processing, Carter says. Even so, compared to corn-fed beef, grass-fed bison finished on corn have one-third to half the fat content, less saturated fat, more unsaturated fat, fewer omega-6s and more omega-3s, according to research conducted by the University of Utah, University of Wyoming and South Dakota State University. This is due not only to bison’s low-corn diet, but also to the fact that beef cattle have been altered through the years to naturally have more marbling, even when fed grass.

“If you’re going to eat red meat several times a week, you can make a better choice than going to the supermarket and buying a corn-fed beef product,” says Wayne Askew, PhD, director of the division of nutrition at the University of Utah. “With bison, you’re still getting a tasty product, but you’re also getting more iron, protein, amino acids and B vitamins, and fewer calories and cholesterol.”

Stephens and Gale, now in their third year operating Mile High Bison, which along with meat sells bison hides, hair and horns, do most of their business at a trading post on their ranch. Without much marketing, buyers from as far away as Santa Fe, N.M., line up for their products. The men have had to stop participating in their local farmers’ market because they just don’t have the supply to meet demand.

To grow their herd (which currently stands at 90 animals) the ranchers would need to keep more heifers so the animals could reproduce. Although the duo has considered doing this, Stephens asks, “Why would you want to process fewer animals when the market for the meat is at an all-time high?” Additionally, most ranchers recognize that the small scale of bison ranching is what makes the industry sustainable.

Though there aren’t federal laws that govern the production methods of bison, factory farming is not an effective way to raise the animals, Carter says. It’s generally accepted by bison ranchers that the animals do best when family units are minimally disturbed and each animal is given at least 400 square feet to roam. The prohibition of growth hormones also keeps ranchers from factory farming. Hormones and factory principles are based on getting the animal from birth to slaughter as quickly as possible. Bison ranchers don’t agree with these methods—otherwise, they would be ranching beef, Carter says.

But as demand for bison continues to grow, the question on most ranchers’ minds is “how can we keep bison from becoming the next beef?”

On average, Americans eat only a 10th of a pound of bison per year, Carter says. Even if the business tripled, that would only be a third of a pound per year, which is a far cry from the nearly 65 pounds of beef Americans consume. Moving bison toward beef production levels and consumption would require altering the animals to reproduce quicker, grow faster and pack on more pounds per carcass. “At that point, bison really aren’t bison anymore,” Carter says.

“What’s driving demand is that we are something unique,” he adds. “We would rather continue to market our products to consumers who appreciate the value of delicious, nutritious meat produced from animals humanely raised in a sustainable manner, than to market large quantities of cheap bison meat.”

Introduce your customers to bison meat

Larkspur, Colo.-based bison ranchers Jason Stephens and Todd Gale call natural products stores their bread and butter in the retail sector. “We’re starting to see bison products more frequently in stores, I think in large part because these retailers have done such a good job with sharing information,” Stephens says. Pique your customers’ interest in bison meat by using signage to share the following facts.

Beef versus bison: What’s the  difference in flavor?

Bison meat picks up the flavor of whatever the animal eats. Meat that’s processed in the spring, after the bison have eaten dormant grasses and hay during the winter, tastes different than meat processed in the fall, following a diet of spring grasses, Stephens says. Most ranchers describe bison’s flavor as similar to beef but slightly sweeter, with no wild-game taste.

Why does bison cost more?

How do you cook bison?

Because bison meat is significantly leaner than beef (2.42 grams of fat compared to 8.09 grams of fat per 3-ounce serving), it needs to be cooked longer and at a lower temperature. The National Bison Association recommends cooking the meat rare to medium.