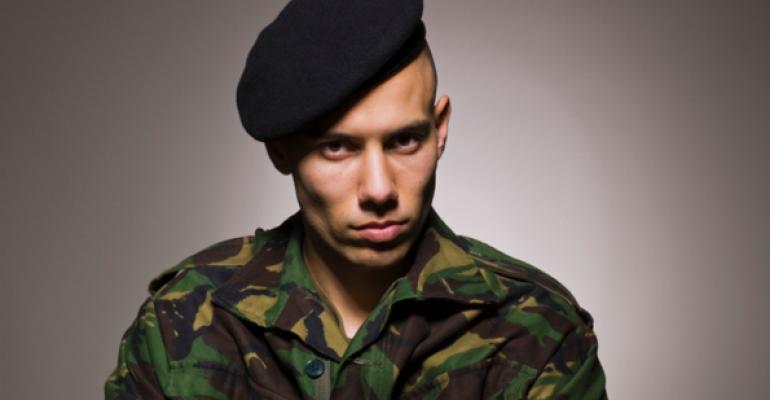 Supplements are in the process of gaining an unlikely ally in the war on health and well-being: the U.S. military. What could Uncle Sam be looking for?

Supplements are in the process of gaining an unlikely ally in the war on health and well-being: the U.S. military.

Military members are perceived more positively than any other profession, and two-thirds of soliders are at least “somewhat confident” that a dietary supplement they have taken worked as advertised, according to data and insights presented at the Council for Responsible Nutrition’s annual conference in Dana Point, Calif., Nov. 5.

“The dietary supplements industry is at an inflection point. Health trends are in favor of more research and application of these products,” said Wayne Jonas, M.D., president and CEO of the Samueli Institute, which conducts research for the Pentagon.

Jonas said members of the military use supplements at a higher rate than the civilian population, with multivitamins being the top supplement used.

Among Marines in Afghanistan, eight out of ten service members use multiple supplements, with nine out of ten using stimulants. Almost half of those serving in Afghanistan had pain, and 15 percent are taking opiods to manage pain.

“You go to sleep with Ambien and wake up with caffeine. This is the routine for the average service member deployed,” said Jonas. “Caffeine is ubiquitous and is served up in all situations.”

Jonas said that, unlike the National Institutes of Health (NIH), which focuses on efficacy, the military is more interested in “effectiveness,” which he characterized as whether a supplement “works in a real-life setting compared to something else. There’s a huge opportunity to conduct research in a military setting to push these areas.”

An example illustrating the difference between efficacy and effectiveness is ear acupuncture for pain. Jonas said the NIH would be interested in looking for the biological mechanism in the brain and studying the placebo effect. “The military didn’t care about it. They said, ‘Could you train medics in the battlefield?’ They wanted a pragmatic study – not that they didn’t care about placebo and mechanism of action, but they’re more interested in real life.”

The military has seven areas they are actively investigating, areas ripe for supplement solutions. These are:

Action picking up on the brain front

Improving cognitive function as well as treating injuries in the brain remain areas of keep focus for the military, said Jonas.

“We are increasingly developing war techniques that are less about physical and more on cognitive,” he said. “Currently, there are embedded microphones and automatic communications, and visual-enhancement devices. Integrating and managing information is a challenge for anybody but especially when you’re out in the field. The point is, if there are areas in the dietary supplements industry that can address these areas, there is a lot of interest in the military.”

A number of studies are currently under way to investigate just that.

One, called the OO3 study, is investigating the use of omega-3 fatty acids on depression and suicide. “In the U.S., there are low levels of omega-3s in general. But a blood survey done in the military show the average service member had the lowest of the low in terms of the omega-3 to omega-6 ratio,” noted Jonas.

For the complete business, science and innovation angle on all things omega-3s, check out the new Nutrition Business Journal / Engredea report on omega-3s by clicking here.

The SuperChicken OO3 study looked at integrating omega-3s into chicken and meat and then test the fatigue and physical fitness of 72 soldiers in a 10-week double-blind study. The most salient study detail is that “it tastes good except in bacon,” said Jonas. While performance results may not have measured up, the military nonetheless discovered that integrating omega-3s into commonly consumed foods could be one method of delivering the goods to have a major effect on conditions such as depression, suicide and heart disease.

“In World War II the recruits were thin and hungry, so the military started feeding them,” said Jonas. “That led directly to the school lunch program.”

The Metabolically Optimized Brain Study is a two-year study, currently underway, to use supplements for brain function. A steering committee has been established, which is in the process of determining the best ingredients to use in a study examining effects on cognitive function.

What do you think? Do you support our troops taking supplements? Comment below.

How COVID-19 launched immunity to a year-round business—and what comes next
Nov 04, 2021