A chat with Rodale Institute organic pioneer and research rebel Tyrone B. Hayes 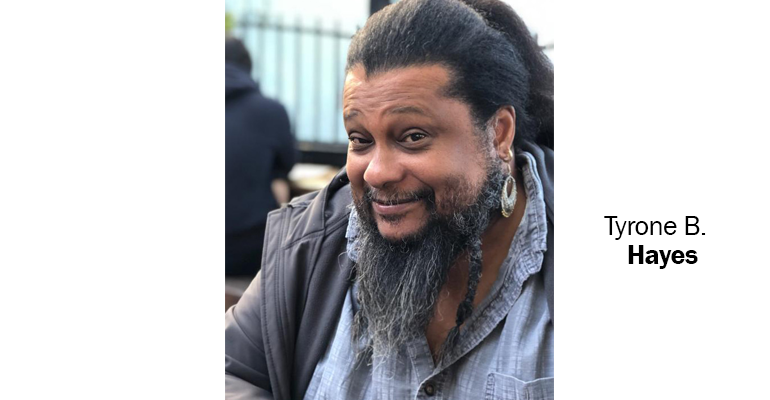 As a professor Tyrone B. Hayes was encouraged to work with outside funders on research. This worked until Hayes discovered the results of his research correlated to incredible negative implications for the planet and human health. Here, we visit with the Rodale Institute 2020 Organic Pioneer Award recipient.

Frogs and amphibians drew the interest of scientist and Rodale 2020 Organic Pioneer Award recipient Tyrone B. Hayes, PhD, from the time he was a child. His enthusiasm for science led him to receive his bachelor’s degree from Harvard University in 1989 and his doctorate from the Department of Integrative Biology at University of California, Berkeley, in 1993. Today, he’s still at Berkeley as professor of integrative biology where his career’s work has focused on the role of endocrine-disrupting contaminants, particularly pesticides, and their impact on global amphibian declines and public health.

Hayes says he set out as a scientist to simply do his research and analyze findings. He cared about the environment, but he wasn’t an environmentalist. Still, his research resulted in a widely known study connecting the herbicide atrazine to the feminization of male frogs. From there he has examined the exposure of racial and ethnic minorities to chemicals and the role such exposure plays in health care disparities.

Growing up were you a scientist or environmentalist?

I have always been aware of the adverse health affects of synthetic chemicals and the environment. I was born in 1967 and grew up in the early ’70s during the time of DDT and when it was found to be affecting bald eagle and osprey populations. I grew up in South Carolina and I never saw an alligator, they were on the endangered species list. But I didn’t set out to study the effects of chemicals in my research. My research focused on hormones and amphibian development.

How did your work switch to being more focused on endocrine-disrupting contaminants?

I was aware of Lou Guillette’s work on the role of pesticides in endocrine development and breast cancer and the impact of chemicals on alligators. But if we have anyone to thank for my role in this movement, it’s the chemical industry. I was directed by the manufacturer [Syngenta] of the chemical atrazine to see if this weed killer interfered with frog hormones. [What Hayes discovered was that the chemical indeed had serious damaging effects on the hormones and sexual development of frogs, which led to among other things reproductive abnormalities.]  It wasn’t until I looked at my studies in relation to others that I realized ‘oh wow,’ this is not good for wildlife in general or people—and environmental health being the same as human health. I would like to say I had great insight. But the work directed me.

In 1998 Syngenta (formed by the merger of Novartis Agribusiness and Zeneca Agrochemicals) asked you to conduct research on the herbicide atrazine. What did you think of this request?

My big fear going into the research was that they’re asking me to do this study because they know it’s not going to do this and they want a scientist at a reputable institution to say it was fine. But, I think they already knew and their goal was to have control over the data. I was a brand new faculty member. I became a professor in 1993-94, at a time when we were encouraged to diversify our portfolio in the way our research was funded. And I had this endless funding. I was fresh out of getting my PhD, my wife went back to school and we had another kid on the way. I was making a lot of money for someone out of school. That was their plan. I also had a pedigree. They would have supported my research and lab for as long as I touted the company line. Their goal was to take control over the situation.

It had a huge impact. The publicity over the conflict itself made it difficult to get federal funding. It cut me out of getting industry funding and put me at odds with the university. I quickly became elevated to someone who may make industry not want to invest at UC Berkeley. One-fifth of the funding was coming from Novartis [Syngenta]. They had a huge investment at Berkeley. My battle put me at odds because I was costing the school revenue. And it cost me personally. I was left scrambling to get funds. I received a little bit of government funding but private institutions paid me to continue the work. Some nonprofit NGOs really stepped up. And every year since, I have pieced it together so we could keep going. I haven’t had a five-year grant in 20 years, since this happened. I don’t know if we will be funded this year, but somehow I have been able to support students and the research.

Syngenta spent years after Hayes stopped working with them trying to discredit him as a scientist. These events were written about in an article in the New Yorker called “The Biologist Who Challenged Agribusiness.” The New Yorker also made a short documentary called, “What’s Motivating Hayes.”

You’ve said, “We can change the past but only if we act now while it is still the future.” How does this relate to your work?

In keeping with that phrase, my research is looking toward the future. So when we get there we will have a better past to look back on. We are looking at the sixth generation of atrazine-exposed frogs. We are seeing the transgenerational effects stemming from frogs exposed generations prior. Atrazine exposure continues to cause genetic effects three, four, five, six generations down the road. Even if we stop now, what will it look like down the road? The same can be said about cancer and human health. It’s important to not disconnect that what is relevant and good for the environment also relates to human health. If you stop chemical exposures, the impact of what we are doing now will be seen multiple generations down the road. That is where we are looking. When we talk about being environmentalists, we all should be, we live in the environment. I would like to see everyone thinking about impacts in every day life.

I like to quote an unlikely source, the Presbyterian Church. I got asked to give a presentation at the Presbyterian’s for Earth Care conference that happens every year. There, they said that the Creator created this world and made us stewards of the Earth. We have to understand the science if we are to be in charge and protect it. We can’t really fix anything, but the best we can do is stop it from getting worse.

I wish everyone would realize that. When I first moved to California, there was a drought and there were cards on tables at restaurants that said they will only bring water if you request it. But, within a year, they were pouring water again that people waste. Why are you only conserving when there is a crisis? Look what happened in Minnesota with Black Lives Matter—why are you just now reacting, we have known this for more than 30 years. If people would think about the future and how they will impact what will be our past not just when there is a crisis. Now, everyone is gardening and making sourdough bread. Why do you have to wait until there is a pandemic to do this?

Have you thought about studying other chemicals?

Atrazine just keeps pulling me back in. There is nothing that we have encountered that is as potent or scientifically interesting—not even glyphosate—nothing more globally distributed. It’s a poster child … no chemical is as intellectually attractive as atrazine. The things it has done, I have not heard of any other chemical doing that. Every time I do an experiment, I hope it won’t do anything.

On the policy front where should energy be focused?

I would like to see the Environmental Protection Agency focus on the ‘E’ and the ‘P’—to be more protective and focus on human health and environmental health rather than on financial gain by the polluters.

What initiatives keep you hopeful?

Things I think are important are banning the individual chemical classes and GMO labeling in terms of consumer choice. I don’t think the science is important, but you should have a choice, do you want them or not. Labeling allows you the personal choice and allows you to vote with your dollars. But the choice should be made in such a way that low-income individuals can also have that choice. If you are going to subsidize big ag, also do it for organic or non-GMO products, so people without financial means also have a choice.