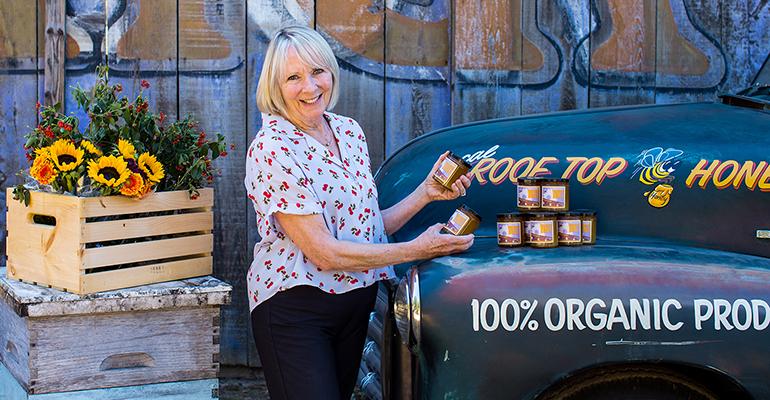 Seventeen years after opening Alameda Marketplace, Donna Layburn is close to opening a second location in Castro Valley—when it's safe to do so.

Today, public markets and food halls are popping up all over, but that wasn’t the case two decades ago when Donna Layburn dreamed up Alameda Marketplace. She’d been running two successful health food stores in Alameda and Oakland, California, and knew it was time to expand.

When she found a 1930s-built Ford dealership that had “good bones,” her husband said, “If you’re really smart, you’ll make a marketplace.” That she did. Since 2003, Alameda Natural Grocery has anchored the building while nine independent food businesses lease space from Layburn.

The marketplace concept has been such a hit that she replicated it nearby and planned to open Castro Valley Natural Foods on March 21. A few setbacks and the coronavirus pandemic has delayed that opening indefinitely, according to the shop's Facebook page.

Through all the growth and change, Layburn remains committed to helping her community form meaningful relationships with food and doing her part to protect our planet. Perhaps her most visible effort is the rooftop beehives at the Alameda store, which provide local honey and educate shoppers. We caught up with Layburn to learn more about her journey, innovation and passions.

What first led you into natural products retail? 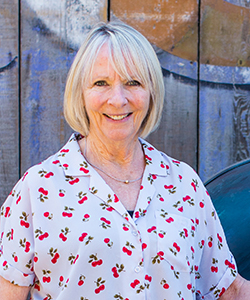 Donna Layburn: Back in the 1970s, I was married, living coastside and having kids, and suddenly it became very important to have an organic garden in my backyard and wash and reuse diapers. I joined a little food co-op; a friend gave us a beehive; we all did natural childbirth. I call these my “Earth Mother years”—a really cool time in my life when my passion for organic and natural living was born.

Then I had to be realistic and get a corporate job, so I went into banking for several years. When that ended, I got a nice severance, so I researched what I wanted to do next in life. My husband and I bought a health food store in Oakland from a lady who’d owned it for 27 years, and that immersed me back into herbs and food as medicine. Our 800-square-foot store was doing about $700,000 a year in the early ’90s; then we took it to over $1 million. Because that store was so successful, we started another in Alameda, where we live. After three years it was obvious that either Whole Foods would come to town or we needed to grow from just supplements into grocery. So we went from those two small stores to a 20,000-square-foot building.

How did you turn a former car dealership into a marketplace?

DL: Seventeen years ago, it was unique to take an old building and put food into it. At first, we took 4,000 square feet for our store, and it took almost five years to get all the tenants I wanted. I had 40 to 50 businesses wanting to come in, but either I read their financials and realized they didn’t know what they were talking about or they weren’t going to do the natural, organic or passionate food thing.

What kept you going with this mission?

DL: This was one of most financially challenging times in our lives, as we had invested everything to make this project work—we sold the Oakland store, cashed in our 401(k)s and used probably 20 credit cards. But right from the beginning, even when our footprint was small in this cavernous building that had plastic sheeting hanging everywhere, the community supported us. Eventually, the city of Alameda helped us out financially. After three years, if it hadn’t been for people showing up to get us over the hurdle, this wouldn’t have worked. But through this experience, I truly feel that if you hold onto your vision and beliefs, the right things will come.

What makes the marketplace so successful?

DL: I think we’re successful because the grocery store is the anchor and all the other tenants—the baker, meat market, wine and cheese shop—are passionate about their food relationships. The marketplace feels like a real community space, and the fact that all of the businesses are independent sets us apart. It all just works; it’s rooted.

What is Alameda Natural Grocery best known for?

DL: We have high standards and earn customers’ confidence by sticking to them. We’re not a crossover store that carries both natural and conventional products, so they know we’ve checked out all of the food before it goes on shelf. Our employees are well trained and passionate about food, and about 30% have been with us longer than 10 years. That’s the reason we’re doing a second store and marketplace: Our employees deserve to have career opportunities and the opportunity to own this place. We’ve filed an [employee stock ownership plan], and that’s my exit strategy. The people who work for us are so smart, understand what’s going on with the future of food and want to be part of it.

DL: I love the marketplace concept and wanted to replicate it, but this building is an old department store that’s about 39,000 square feet, so it’s much larger than Alameda—it has big energy. Our store has 7,000 square feet on the main floor plus 5,000 square feet in the basement for storage and a commissary kitchen, which produces food for the Alameda and Castro Valley stores and will be used by Alameda County food programs.

We also have local chefs signed up to do dinners and promote themselves. Then there are two classroom spaces upstairs where tenants will teach cheesemaking, canning and fermentation classes to get people excited about their relationship with food.

DL: When we had a hive in the ’70s, I didn’t know much about bees. But once I learned more, they became a passion. This species has been on Earth for 65 million years, and I don’t want to be part of the generation of humankind that destroys it. It’s frightening to think what we’re doing to the Earth—if the bees die, we die. I can’t stand the new messaging that the future of food is artificial intelligence, drone bees and phony everything.

I want people to think the better solution is regenerative agriculture and creating natural habitats.

So that led you to install hives on the Alameda store’s rooftop?

DL: About 10 years ago, we put four hives on the roof and eight in the neighborhood. We just harvested 600 pounds of honey that we sell in our store, and people love that it comes from our rooftop. It’s totally Alameda honey because bees don’t fly over the water to the island.

When we harvest, we do it right in the store so everyone can watch our beekeeper slice off the wax and put it into the centrifuge and taste the wax and honey. Once you have bees, there is so much life in your garden or on your rooftop. I sit and talk to the bees, often with my glass of wine or camera, and I know that’s a special thing.

What do you enjoy outside of work?

DL: I love art and photography. My husband and I love camping and being in nature, so any opportunity to do something cool, we’re in. I also kayak and golf, and I love to read and spend time with employees.

We’re all foodies and love to cook. We embrace the lifestyle we support in our store.

You mentioned exit strategy. Do you plan to retire?

DL: It’s hard to say if I’ll ever totally retire. I have a friend who says she wants to die in the aisles; I’m not sure I do. Lately, I’ve spent all my time on construction of the new location, so the smart people who work for me are already running the business. I’m just an overseer and mentor. I feel like Bob of Bob’s Red Mill: He still does his "Bob thing;" I do my "Donna thing."

5 stores generate buzz with their own beekeeping operations
Sep 17, 2019