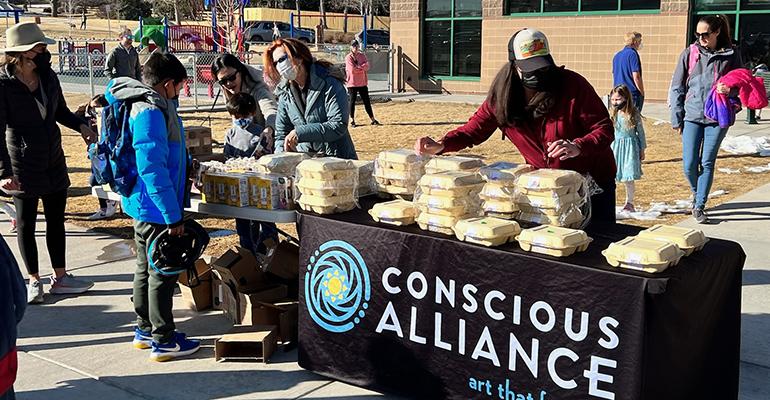 The nonprofit issues a call to action for the natural products community: Feed more, waste less. The organization has the logistics to make that work.

In 2002, brothers Justin and Evan Baker stood outside Denver's Fillmore Auditorium, hawking photocopies of an artist-donated String Cheese Incident concert poster to music fans in exchange for a few cans of food. The University of Colorado students thought maybe, just maybe, they could rally other young music fans to fight hunger.

In June, the Baker brothers' nonprofit, Conscious Alliance, moved into its 10,953-square foot distribution center and headquarters in Broomfield, Colorado. On Dec. 30, the Marshall Fire destroyed over 1,000 homes just a few miles away, displacing thousands of families. 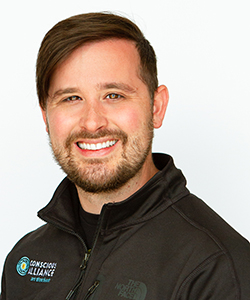 The next morning, team members nimbly rallied a stunning support operation. They brought healthy salads to firefighters in the field. World Central Kitchen, their pandemic delivery partner, flew in to help more than 90 restaurants supply meals to people who had lost all their belongings, as well as the roofs over their heads. Conscious Alliance staff and volunteers delivered meals—more than 10,000 meals in the first two weeks—to displaced residents. Conscious Alliance's effort continues through its We Got This initiative, bringing displaced families everything from air mattresses to gift cards.

In the past 20 years, Conscious Alliance has fed more than 8.8 million meals to kids and families in need. With its roots in music and art, creativity fuels the group's evolution. From food drives at concerts, the nonprofit helps brands simultaneously fight food waste and hunger.

"We've stopped 2.6 million pounds of food from going into landfills," says Executive Director Justin Levy, who began working with Conscious Alliance after he met the Baker brothers outside a String Cheese concert in 2004.

Conscious Alliance collected 4,000 pounds of food at their its effort at the Fillmore. At the next concert, it gathered 8,000.

"They realized they had something going on," Levy says. The brothers drove the food to the Pine Ridge Reservation in South Dakota, where Justin Baker, a religious studies major, had spent time learning about native traditions. When Justin Baker asked Sioux elder Floyd Hand how he could help the community, Hand said, "If you want to help our people, help feed our people." One of the most economically isolated communities in the country, the reservation is about the size of Connecticut, yet it has only one single full-service grocery store. A six-hour drive from the Boulder County natural products mecca, the average life expectancy at Pine Ridge is 48 to 52 years.

With donations gleaned from Art that Feeds food drives around the country, Conscious Alliance began making regular food deliveries. The group worked with artists like Dave Matthews and Jack Johnson to inspire young people to join in the fight against hunger.

"We spent a lot of time going cross country in Penske trucks," Levy says. And, back in the days when squeeze packs were just for ketchup, Justin Gold of Justin's joined the effort, donating the nut butters his company made. "That was back when we were just four employees in my living room," Levy says.

In 2008, Whole Foods donated products valued at $1 million to Conscious Alliance and expanded the group's operations by distributing truckloads of large-scale donations from natural brands.

"We met (Plum Organics CEO) Neil Grimmer, who immediately picked up the phone and began calling B Corp businesses to come on board," Levy says. "Suja Juice gave us our own flavor."

Conscious Alliance headed into Expo West 2015 with partners Justin's, Plum and Suja to launch one of the country's first school backpack programs featuring natural and healthy products. By the time they left Anaheim, KIND, Organic Valley and Boom Chicka Pop were on board. Traditional programs fill students' backpacks with foods containing high amounts of sugar, sodium and artificial ingredients. Kids at Pine Ridge—all of whom qualify for free or reduced lunch—went home with nut butter, fruit and veggie pouches and health tips.

Not long after, while New Hope's Eric Pierce led an Esca Bona presentation about food waste, something clicked for Levy. Conscious Alliance had deep knowledge and processes around logistics, while brands had products they couldn't sell at stores.

The team took that value proposition and the "good will of Justin Gold and Neil Grimmer and other folks and started picking up close-to-code products and began delivering them to kids and families who needed them," says Levy. "It began with 300 meals, then 700…then 1.2 million to 2.6 million meals delivered during a pandemic."

Today, Conscious Alliance works with 65 brands to keep food out of the landfills and put it in the hands of families in need across the country. The group feeds students at all 15 schools on the Pine Ridge Reservation and fills bellies across the country with its backpack programs, after natural disasters and, of course, during the COVID-19 pandemic.

This past year, ALOHA, makers of plant-based protein bars, joined the organization to fight hunger among students in the Chicago Public School System, where 1 in 6 kids is food insecure. ALOHA issued a call-to-action for other natural brands; 15 joined.

"Day in and day out, the Conscious Alliance team puts out unequaled energy and kindness," says Tricia Leone, director of partnerships and marketing at ALOHA. "They inspire us each day and we are proud of our partnership to support the Chicago Public School program as well as contribute to their overall mission."

ALOHA CCO Amy Boyer says, "Partnering with them is personal; our employees feel engaged and can see the direct impact we are having, which makes our connection even more powerful."

The organization's ability to make connections across and beyond the CPG and music industries has been key to its success.

"Celebrating 20 years as a nonprofit is spectacular," says Andy Fyfe, director of Equitable Growth, B Lab US & Canada. "B Lab is a non-profit and we'll admit: Nonprofits and government are insufficient alone to tackle the most severe issues our communities and planet face. It takes partnership across sectors. Conscious Alliance does this so well and we applaud ALOHA and all the other brands who step up for hunger relief with Conscious Alliance. Nobody should be hungry today. It's our collective obligation."

Heading into Natural Products Expo West is prime time to connect with the organization and see how your brand and you, personally, can make a difference in the mission against hunger and food waste. Surrounded by samples, it's easy to forget that 1 in 6 children in America are food insecure. "No seven-year-old deserves to go hungry," says Levy. "We welcome everyone, from the smallest brand to the biggest… as a community let's keep dreaming, let's keep building, let's keep creating and let's keep making an impact."