Nearly half a million U.S. deaths each year are linked to cigarette smoking, with more than 41,000 of those deaths caused by secondhand smoke, according to the Centers for Disease Control and Prevention. Despite being deadly, cigarettes are lucrative for the retailers that sell them, generating some $80 billion a year in U.S. sales.

CVS Health, the drugstore chain with close to 10,000 U.S. locations, was raking in $2 billion each year in cigarette and other tobacco sales—that is until the company decided it couldn’t continue selling products known to kill people if it wanted to live its purpose of helping people on their path to better health. The company announced in February 2014 that it would ban all tobacco products from its stores by October of that year.

Led by CVS Health President and CEO Larry Merlo and CVS Pharmacy President and CVS Health EVP Helena Foulkes, CVS Health got the tobacco out a month earlier than planned, and the company hasn’t looked back since—and, in fact, is investing $50 million as part of a five-year plan to create a generation that is able to grow up free from smoking.

The company’s tobacco ban didn’t necessarily look good on paper, at least in the beginning, and NBJ is recognizing CVS Health for the management achievement required to do what was right for the long-term health of both its customers and its business, even in the face of short-term, quarterly revenue pressures. 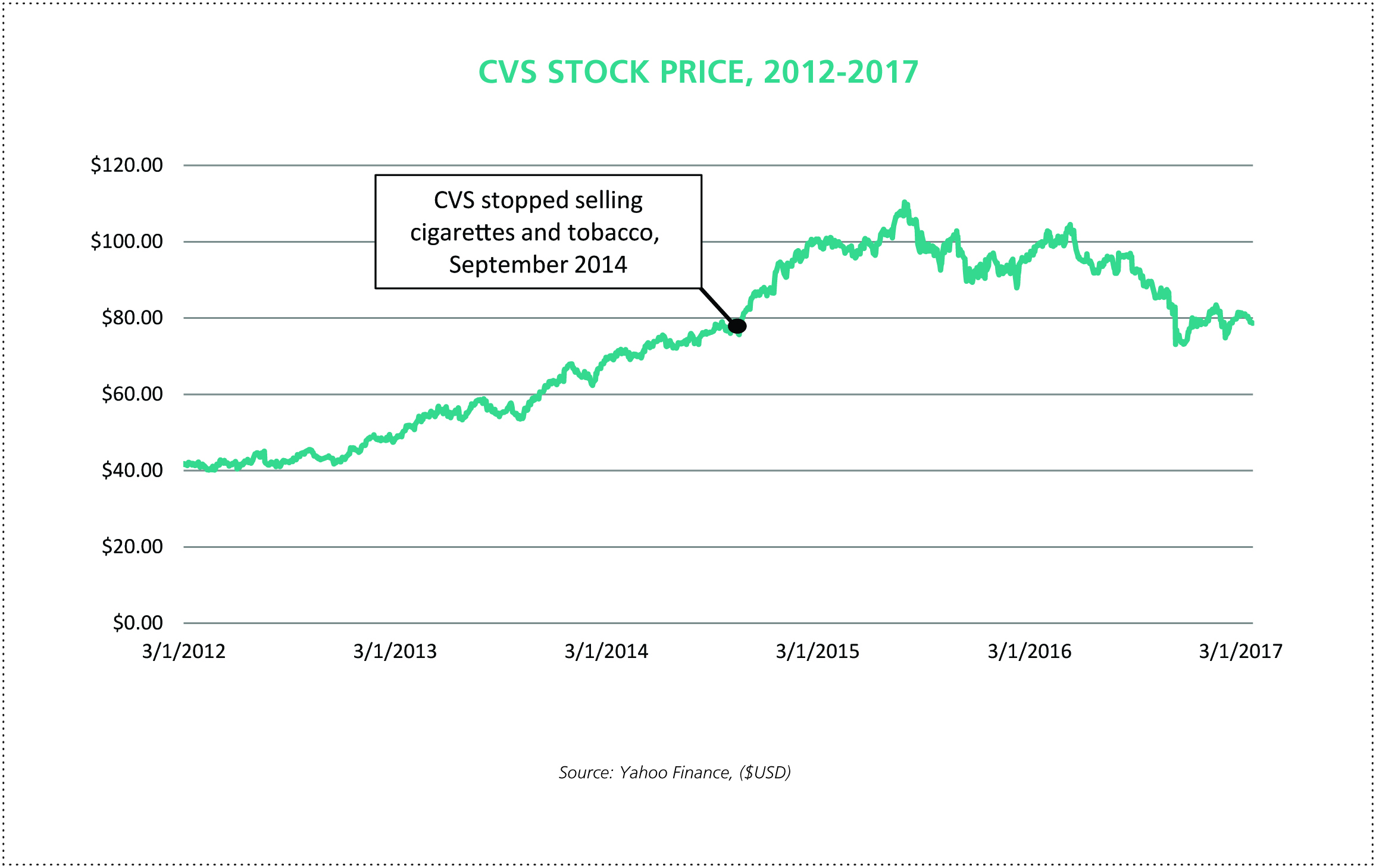 Nixing tobacco wasn’t a new idea for CVS in 2014. In fact, Helena Foulkes, the woman who helped lead and became the spokesperson for the decision, says the idea had been circulating within the company for nearly 10 years. In 2012, the CVS executive leadership team began working to unite the two parts of the organization—the pharmacy/drugstore business and the pharmacy benefits management business—under a common purpose.

“After lots of work, we landed on something pretty simple: Our purpose is helping people on their path to better health,” Foulkes told attendees of the 2016 Shared Values Leadership Summit.

Once it was decided that there was no room for tobacco sales in that purpose, the entire leadership team united in removing the deadly products from CVS stores. “Our board [of directors] pushed us and said, ‘You cannot be the second company [that bans tobacco]. You need to be the first,” Foulkes said. “Our CFO played a big role. Despite the fact that we were losing $2 billion in sales, he was quite passionate about it and helped us navigate how we could make the economics work.”

The decision was immediately lauded by anti-smoking and health advocates, but financial analysts weren’t so sure the move was strategically sound, given the downward effect on CVS’s front-of-store sales in the first few quarters following the ban. “[The ban] has most certainly affected sales both directly, and indirectly, through the reduction in impulse purchases that tobacco customers made,” wrote Conlumino analyst Stephen Ward in an August 2015 financial report about CVS Health. 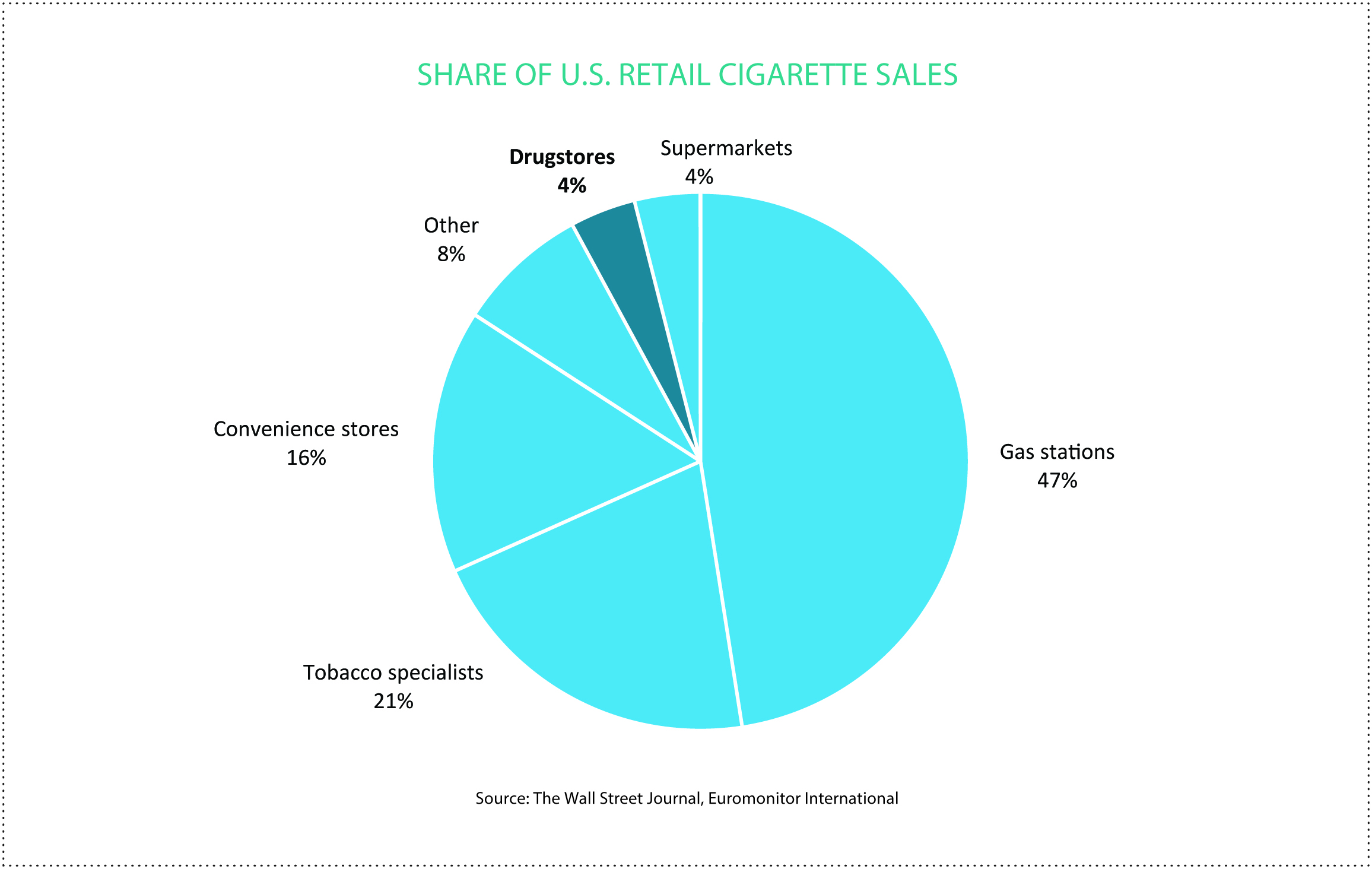 The revenue pinch caused by the tobacco ban has since been followed by a more than $16 billion increase in CVS Health’s pharmacy benefits management business, through which it manages the prescription drug plans for some of the world’s largest health-insurance companies. Foulkes attributes the growth in this part of the CVS Health business to the company’s demonstrated commitment to its core purpose of helping people on their path to better health.

This commitment has led to other “surprising” benefits, including the ability to more successfully recruit top talent, Foulkes said. “We have people coming out of the woodwork saying, ‘I want to work for a purpose-driven company.”

Banning tobacco also galvanized CVS Health to strengthen its position as a health and wellness retailer by improving the food offerings throughout its stores. “We’ve shown that we can make big, bold decisions,” Foulkes says. “Our team of merchants who run the front store part of our business are driving toward much healthier food offerings, and [the tobacco ban] has really empowered them to go after that.”

Americans who live in the communities where CVS operates are perhaps reaping the greatest benefits of the tobacco decision. Although only 4 percent of cigarettes are sold annually in pharmacy stores, CVS Health’s ban resulted in a 1 percent decline in overall cigarette purchases in the markets where CVS has a 15 percent or more share of drugstore sales, Foulkes told the Shared Values Leadership Summit. This 1 percent decline “translates to every smoker buying five fewer packs on an annual basis,” she said. “We were thrilled to be able to see [this level of impact] in the data.”

Supporting smoking cessation efforts continues to be part of CVS Health’s purpose and mission. In March 2016, the company launched a five-year, $50 million campaign to fund anti-tobacco education and advocacy in an effort to prevent kids from picking up smoking in the first place, and to educate their parents about the dangers of secondhand smoke.

All of these efforts are helping CVS Health build a culture of improved trust—something every management team must be focused on today. “People have a lack of trust in all forms of power, and that is why it is so critical that we make purpose-driven decisions,” Foulkes said. “You’re never done with one decision. You’re constantly earning that trust.”

NBJ honors GNC's Mike Archbold for his efforts on behalf of the industry
Apr 05, 2017