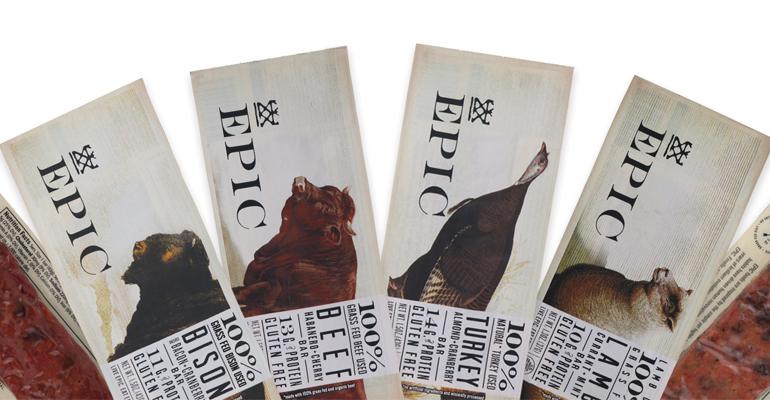 The flourishing meat snacks and animal fat cooking oils company is changing the conversation around meat.

When EPIC Provisions launched its meat bars back in 2013, the natural industry and its consumers didn’t quite know what to make of them. But before long, this little mission-driven company from Austin, Texas, had made a ginormous impact. Health-minded consumers began devouring EPIC’s convenient protein-rich, grain-free, dairy-free meat bars while applauding its highly ethical sourcing methods and mission to improve animal-rearing practices.

Looking to use all parts of the animal, EPIC expanded into animal fat-based cooking oils last year. Its Duck Fat Cooking Oil snagged the NEXTY Award for Best New Condiment at Natural Products Expo West 2016. We sat down with Taylor Collins, who cofounded EPIC with his wife, Katie Forrest, to discuss EPIC’s past, present and future—and the future he envisions for meat production.

Related: 'It’s us who will inspire them,' says EPIC co-founder on General Mills acquisition

What was the genesis of EPIC?

Taylor Collins: Well, it was certainly an unlikely turn of events in our lives. Katie and I owned a vegan raw foods company called Thunderbird. At the time, we were both raw-food vegans and thought that was the best way to optimize our health and wellness. We were training for Ironmans, marathons and big bike races. But over time, we just weren’t able to recover and were having chronic injuries. My wife was constantly having gastrointestinal problems and chronic inflammation. The breaking point came when we were ramping up for the Ironman World Championship in Hawaii and physically could not train. We went to every medical professional in town and nobody could figure it out. We had no other options to turn to, so we began questioning our diets.

And that’s when you began reconsidering meat?

TC: We found a holistic naturopath who prescribed cooked vegetables and high-quality animal proteins and fats. We did a 180-degree flip with our diet, and it was unbelievably game-changing. Within a week of transitioning, years and years of chronic symptoms went away. That was when we realized there was a void in the market. Convenient high-quality meat didn’t exist, so we started EPIC.

What was it like being first to market with a meat bar?

TC: This was an interesting point in our lives. In 2013, our bars were a first. We had four SKUs to start with through the entire first year. There are a ton of competitors now, which is just crazy because when we launched, we were really excited about our bars, but they were so esoteric and people couldn’t understand them. They wouldn’t even try them because meat bars sounded too strange. So it’s awesome to see how the market has reacted. The bigger idea is that more people are eating more consciously, reading ingredient labels and expanding their creative capacity of what meat can and can’t do.

On that note, we always hear “eat less meat” for health and environmental reasons. But you believe meat can be an important part of the diet and not necessarily harmful to the Earth. Is it tricky to get this message across?

TC: Yes, but it was much more challenging in 2013. When we first showed up at Expo West, I don’t remember seeing another meat brand there. The natural foods community was very much “there is no place for meat here” because it is trying to promote health and responsible farming. I won’t say all meat is good. The way the majority of it is produced is destructive for all. Feed lots should be illegal. But meat has gotten a very bad rap because, for the last 50 years, it has been industrialized. People wanted meat cheap and very consistent, and there have been unintended consequences of that. We are basically challenging this notion and saying there is a wrong and a right way to raise an animal. If you do it right, it’s a win-win-win. We hope to inspire a change of practices.

What is the right way to raise animals for meat? And how do you ensure that the meat you source has been raised responsibly?

TC: We have developed an internal supplier protocol within our business. If anyone wants to sell us meat, they are measured to our gold standard, which is regenerative agriculture. This involves looking at diverse ecosystems, migratory species and animal welfare standards. All ruminant animals are grass-fed, consuming the diets they are biologically intended to eat. They have access to pasture and are allowed to roam freely so they can express their natural innate behaviors. Also, they have the regenerative ability to impact the ecosystem. When that’s the case, it’s a net positive for the animals, the ecosystem and the consumer, who is eating nourishing food.

So, potential producers will fill out a supplier card and we choose those who can check off the most boxes. We’re finding that many want to change their practices to meet our standards, and we can help them through the process. Also, if they make these modifications, we will be here to purchase large quantities. You’re in the process of becoming a producer as well, correct?

TC: Yes, just a few months ago, we purchased a ranch in the Central Texas hill country, about an hour from Austin. We are really excited about that. Our intention is to raise our meat on that farm and to become an educational center for the community, buyers and anyone interested in learning about regenerative agriculture. It’s our own field test for all of the practices we advocate for. The land we purchased was in disarray. It had been farmed so conventionally for 70 or 80 years so the soil is dead and cannot sustain life, especially large animals. But this was part of our experiment—to intentionally get harmed land and restore it. We just brought out honeybees to help pollinate and spread seeds from native plants. These cover crops will put nitrogen into the soil.

Do you know when you’ll be able to add larger animals to the land?

TC: The agricultural processes we advocate for are all about long-term planning, knowing your intention and working methodically to accomplish it. We will introduce bison, hogs, turkeys, chickens and goats at the end of this year—really exciting. We won’t yet have enough forage and healthy grasslands to sustain them without outside inputs, so for now we’ll purchase hay and silage from local farmers to supplement what we have.

How else do you aim to affect change in the meat industry?

TC: We are piloting a program at the end of this year: a regenerative seal on a select number of our packages. We’re going to trial it in select grocery stores. With this seal, for the first time ever, a consumer can hold a meat product in her hand and know for certain that the animal used in that product helped heal and restore lands and trace it to empirical data that five pilot ranches are collecting. Many seals on the market are very prescriptive—do this, don’t do that; this is allowed, this is not. This one is like a living seal. The goal is for every mindful meat company to have this seal. It helps consumers vote with their dollars.

Moving on from meat bars, you won a NEXTY Award for Duck Fat Cooking Oil. Has this product been well received?

TC: Definitely. The genesis of the cooking oils line was thinking about ways we could use the whole animal and minimize our own waste. We were wasting a lot of fat from pigs, cows, bison and duck. We didn’t have a use for it in our products so we’d sell it to commodity-type companies for very cheap. When we took a step back, we realized this fat could be a really valuable material. Animal fat is a very traditional, timeless way to cook. It’s highly stable, very resilient to heat, minimally processed and very rich and flavorful. This was one of those lines where our R&D and operations teams thought we were insane, that nobody would want this. Katie and I kept pushing and ever since we launched the line, we can barely make it fast enough to feed the market.

Did the NEXTY Award help fuel this demand?

TC: It absolutely impacted our business. We launched the cooking oils line at that show, so as far as having to invest in marketing and send samples, the script was flipped upside down. We had retailers flocking to us and saying they hadn’t even tried Duck Fat Cooking Oil but wanted to buy it.

TC: When we announced the acquisition, many were naturally very cautious and nervous about the brand and mission being changed by a big company. Historically, big companies would buy a brand, try to plug it into their big machine and scale up. Then the brand would suck and wouldn’t do well because it had lost the culture, core principles and values of the founders. But we did extreme vetting before selling to General Mills. We asked consumers to please just trust us. We knew there was nothing we could say to make them feel better, so we asked them to just watch what we did and keep us accountable.

And how has this move panned out?

TC: General Mills has been an excellent partner. We are not compromising on any of our ingredients—and they get that, so it’s been a really awesome experience. We had 100 percent employee retention from heritage. Katie and I are still here. We don’t have to be, but we are still having a good time and doing things we feel are important. In our case, it’s not about a large company changing EPIC. It’s about EPIC changing General Mills.

Tanka Bar has a vision to return 1 million acres of land to the buffalo
May 25, 2016