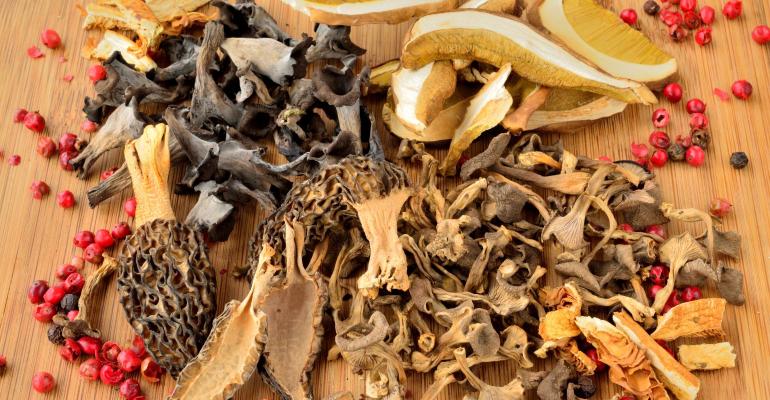 Mushrooms are more than meets the eye. The below-ground mycelium might be where most of the action is at. And they have found their moment as a trending functional ingredient.

When you think mushrooms, you probably think of the fruiting body growing above ground. And you might think of their historic use as immune-modulating substances (when you’re not thinking portobello burgers).

But mushrooms are more than that. Most of the action may reside in the below-ground mycelium—a wispy root system that links all mushrooms together. In fact, a few years ago, biologists around the world got in a contest to decide which was the largest living organism on earth. First it was the whale. Then the sequoia tree. Then it was a Colorado aspen grove (aspens grow by roots throwing up shoots, which grow into other trees, so an entire grove is linked by one root system). The final winner, however, was an Oregon mushroom patch that was connected by mycelium, and all of them in a vast acreage were found to be genetically identical.

In addition, the powders produced from the biomass contain the extra-cellular enzymes and secondary metabolites that diffuse into the cultured substrate it is grown upon. The cultured, fermented remnants of the organic substrate—myceliated organic oats, in the case of the company M2—is not an inert filler material, but is a functional ingredient. It contains oat beta-glucans, silica and silicic acid that happen to be deficient in many people’s diets. Thus, mushroom mycelian biomass products contain the entire life cycle of the mushroom and are truly a “whole food.”

The mushroom moment is here

“We believe that the word about the amazing capabilities and properties of mushroom mycelium and mushroom mycelial biomass products is getting out,” said mycologist Steve Farrar, M2 Ingredients’ chief technical officer. “A wider audience now knows not only what the term ‘mycelium’ means, but they also have an understanding of the role mycelium plays in the health of ourselves when we consume mushroom mycelial products.”

M2 is unique in that it started as strictly an ingredient supplier, but wanted to elevate consumer awareness of mushrooms and drive its ingredient business, so Carter decided to roll out some finished products under the Om Organic Mushroom Nutrition brand.

“We grow ours indoors in a 15,000-square-foot clean room, and that’s a big differentiator,” Carter said. “What you grow mushrooms on is really important because it becomes part of the finished product. The substrate really matters. And growing indoors, we don’t have the issue of toxicity. In fact, the accumulate nutritional components from the organic oats, like B vitamins and beta-glucans.”

Carter said Farrar led the work on evaluating different substrates. Rice, which is often used, both has GMO (genetically modified organism) issues and also can get sticky. “Mycelium have trouble running through that dense, sticky matter,” Carter said. “Oats give them that tough cellulose to digest. They digest the oat matter, and that gives them a great nutritional piece.”

“In general, all of the species of medicinal mushroom mycelial biomass powder that we produce have an earthy, somewhat nutty flavor profile,” Carter said. “It does not overpower the flavor of other ingredients in a super food powder blend or when incorporated into food items such as energy bars.”

She said that species like reishi and turkey tail have a slightly bitter flavor, while others such as maitake have a sweet taste component.

“There are different aspects of different species that improve cognitive health, immune function, or help with sports,” said Carter. “They are really transformational. You can create a really enormous amount of different products using different mushrooms.”

Lion’s mane, for example, is being used in cognitive products. Chaga is an antioxidant with a folklore-type following. Cordyceps are used for endurance. And reishi is for immunity.

Mushroom powders can be consumed without additional heat treatment straight out of the container in fruit juices, fruit smoothies, green mixes, protein shakes and other food items. They can also be steeped in hot water to make a tea with other flavorings, or mixed in coffee, or cooked in soups, stews, sauces, oatmeal and more.

These mushroom powders are soluble, making them good in beverage formats. Carter said they have the ability to tweak powders to improve solubility even more, things like changing particle size to make it bigger or denser so it dissolves.

“Almond milk with mushrooms binds and makes a nice, silky taste and flavor,” she said.

Brands getting on board

In the case of Suja Juice, the company turbocharged its line of kombucha drinks with different adaptogens such as M2’s reishi mushrooms, and it plans on expanding its mushroom-infused beverages in the next year.

“It was a natural fit to incorporate reishi in our kombucha for bolstered functionality,” said Bryan Riblett, Suja’s vice president of commercialization and chief innovation officer. “We felt lucky and fortunate to source from a team producing superior quality, organic products. I think we are just beginning to tap into the possibilities of these amazing ingredients.”

M2 occasionally does concept testing work and works with brands to ensure they get the most appropriate mushroom for what the brand is marketing. They stay in touch with brands throughout the product development process.

“Often customers will send us a product so we can do benchtop work ourselves,” Carter said. “We might say that this species will be better depending on your product and what you’re looking to do.”

She said the next generation of mushroom finished product inclusion is foods.

“Brands are starting to approach us and are realizing that if they’re going to make a veggie burger, let’s put in reishi or lion’s mane,” Carter said. “For consumers, it’s let’s eat a veggie burger and have the benefit of supplements without eating a capsule.”

The Esca Bona Supplier Heroes is a reccurring feature on suppliers that fuel innovation in the good food supply chain. These features explore the brand story, innovation, supply chain investment, research and partnerships that these companies undertake to improve the food system and consumer health. Esca Bona is an event and brand spearheaded by New Hope Network that champions the good food movement by helping finished product brands improve their supply chain, support the people who create food, and best harness technology and innovation.