HomePeople and Company ProfilesFresh Thyme to slow expansion in 2018
Recent
Latest
Podcast: Innovation, sustainability and integrity at PCC Community Markets
May 18, 2022
Whole Foods' honors 30 companies with 10th annual Supplier Awards
May 18, 2022
EarthX Film Festival focuses on healthy food, sustainability
May 18, 2022
6 tips to promote consumer understanding of Certified Organic
May 18, 2022
Trending
Debra Stark’s light shines bright on natural products industry
May 10, 2022
Unboxed: 7 plant-forward ice creams to stock this summer
May 10, 2022
Getting ready for 2023: Trends for brands to consider
May 17, 2022
Hemp CBD industry struggles so far in 2022
May 10, 2022

Fresh Thyme to slow expansion in 2018 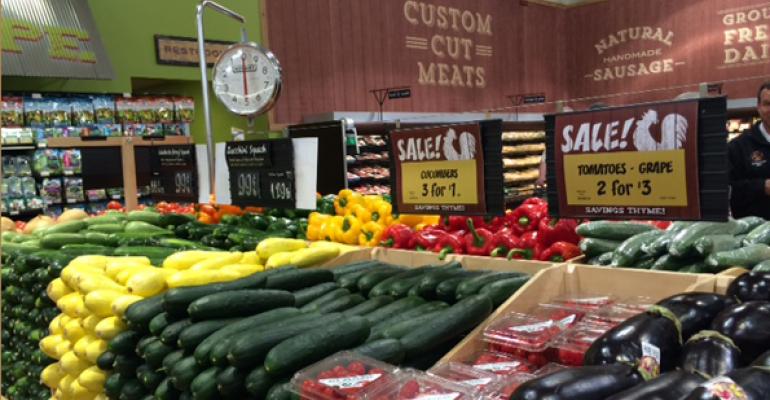 The fresh-focused chain, which is based in the Midwest, plans its first Pennsylvania locations and adds new executives.

Fresh Thyme Farmers Market, which had been on an expansion tear since its founding in 2012, plans to open 10 new stores in 2018, down from the 20 new stores the fresh-focused chain opened in 2017, according to local reports.

The new stores in 2018 will include at least two locations in Pennsylvania—one in the Pittsburgh suburb of Bridgeville and another in Pleasant Hill, about 90 miles west of Philadelphia, according to the chain’s website. The stores would mark Fresh Thyme’s first outlets in that state, where Sprouts Farmers Market is also expanding.

Pennsylvania will be the 11th state of operation for Fresh Thyme and will mark its easternmost outposts. Most of its stores are located in the Midwest.

The 10 new stores reportedly planned for 2018 represent a slight slowdown for Fresh Thyme, which has grown to 66 locations since it was founded five years ago. The company previously said it had planned to open 100 stores by about 2020.

Jay Jacobowitz, founder and president of Retail Insights, Brattleboro, Vt., said he was not surprised that Fresh Thyme might be slowing its pace of expansion.

“Like virtually every other grocery retailer, management is slowing expansion down; from the specialist to mass-market and pretty much everything in between,” he said. “It's a combination of fear of excess space, aggravated by the growing online phenomenon, plus the need to update older business models.”

Jacobowitz noted that Fresh Thyme had been expanding rapidly in its first five years of operation.

“Maintaining consistent training and customer service is probably not achievable at that pace,” he said.

A spokesperson for Fresh Thyme, which is based in Downers Grove, Ill., and is backed by an investment from supercenter operator Meijer, could not be reached for comment.

Earlier this year, Chris Sherrell, CEO of Fresh Thyme, told SN that the company had grown faster than expected, in part because of available real estate opportunities and a green light from its investors.

“Real estate can be very opportunistic, and when the right sites were available you’ve got to take advantage or run the risk of it not being there down the road,” he said.

At that time, Sherrell was forecasting 20 new store openings in 2018.

Some observers have speculated that Fresh Thyme could be a potential merger partner for Sprouts. Sherrell is the former CEO of Sunflower Farmers Markets, which previously merged with Phoenix-based Sprouts. Both Sprouts and Fresh Thyme operate similar formats, with a focus on value pricing, particularly in produce, along with bulk foods and natural and organic items.

Fresh Thyme bolstered its executive team in 2017 with several new hires, including naming Roundy’s veteran Carol Okamoto as chief financial officer in March and tapping Mark Doiron as chief merchandising officer in June. Doiron had a long career with Hannaford Bros. and Delhaize before joining Schnuck Markets and then Fresh Thyme.

Last month, Fresh Thyme named Dean Little chief operations officer, according to a report in the Chicago Daily Herald. Little most recently had been senior VP of operations at Price Chopper Supermarkets, and before that spent 36 years at Vons and Safeway.

Fresh Thyme also has expanded its private label to about 1,000 SKUs, up from 400 in 2016, the newspaper said. New items planned for the line include Greek yogurt, kombucha, soups, mashed cauliflower and a line of natural cleaners.