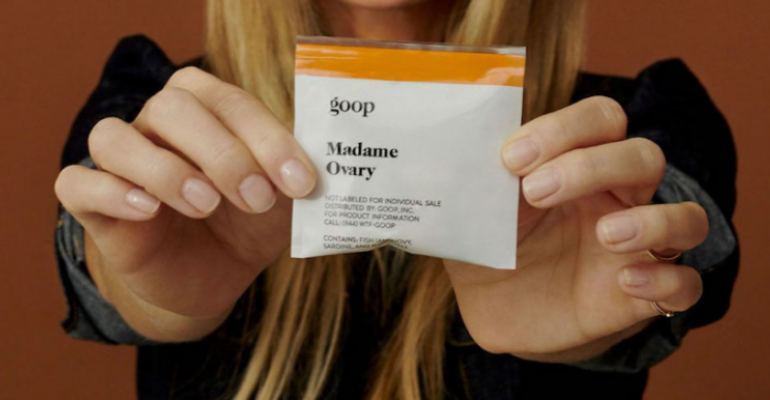 Gwyneth Paltrow’s brand "Goop" has been circulating in the news again, and hers is not the only celebrity-fueled label garnering negative headlines. The industry’s options to dissuade the celebrity effect, however, are limited.

Brands that are helmed, or even merely promoted, by a celebrity figure are not inherently bad. Paul Newman, for example, raised a good deal of money for nonprofits around the world, and Jennifer Garner’s Once Upon a Farm baby food line offers an attractive clean-label option for busy parents.

Supplement brands driven by celebrities, however, are far too often the source of controversy in an industry that doesn’t need help in that particular area. This raises the question: What should the natural products industry do about celebrity supplements?

In the last month, two celebrity brands have drawn the kind of attention that supplements could do without.

Right-wing conspiracy theorist and hatemonger Alex Jones may have been exiled by Facebook, YouTube and Apple, but you can still buy supplements such as his Infowars “Super Male Vitality” on Amazon.

Goop, the lifestyle brand created by actress Gwyneth Paltrow, was ordered to pay $145,000 in September in a lawsuit instigated over claims the company made for its rose quartz and jade “vaginal eggs,” which Paltrow’s company promoted as a therapy for bladder control, among other things (the eggs are still on shop.goop.com sans the former health claims).

And now, Goop is in the news again. A British organization billing itself as the Good Thinking Society is attacking the brand with allegations that it offers misleading advice–they point out 113 examples–and took their complaints to UK regulators. In particular, the critics called out Goop’s Mother Load multivitamin for what it calls excessive vitamin A.

This criticism is debatable. That this attack has been in the headlines because of Paltrow’s celebrity status is not.

Let’s face it, there are far less responsible companies in the supplement realm than Goop, and maybe even Infowars. The story of supplements spiked with pharmaceuticals which made the rounds two weeks ago offers clear evidence of that. But celebrity brands misusing their headline-magnet status may only do more damage, reinforcing the stereotype of members of the supplement industry as flaky profiteers.

A celebrity-branded company making responsible claims with responsibly sourced products could be a plus for educating consumers about the benefits of supplementation. A financial model akin to the one implemented by Newman’s Own might polish the industry image as well.

Paltrow and Jones, however, are doing the industry no favors.

The industry’s options here are limited, especially in the case of the Infowars brand, though we wonder if any contract manufacturers said “no” when the infamous Jones came knocking. But it might be time for somebody from the industry to drop by Goop, maybe with their regulatory attorney, maybe with somebody from one of the trade associations.

Goop's sales were estimated at $45 million in 2017, and the company has been valued at $250 million. With that much money in play, there’s little likelihood that this celebrity supplement brand is going to go away.

There is one solution here for the industry at large: Engage.

What biased reporting about biased science can teach the nutrition industry
Oct 05, 2018
Tales from the “wellness industrial complex”
Aug 08, 2018

Brands and consumers at odds over e-commerce in new sales channel surveys
Jun 07, 2018