HomePeople and Company ProfilesGourmet grocer grows presence in onsite foodservice
Recent
Latest
3 reasons natural retailers are inflation-friendly shopping destinations
May 25, 2022
Sponsored Content
Organic agriculture and its impact on ingredients and the planet – webinar
Sponsored Content
The goodness wrapped in a certified organic seal – video
Podcast: What brands need to get on shelf at Fresh Thyme Market
May 24, 2022
Trending
Getting ready for 2023: Trends for brands to consider
May 17, 2022
6 tips to promote consumer understanding of Certified Organic
May 18, 2022
The Planting Hope Company aims to prove gender equity leads to success
May 23, 2022
Natural beauty market trends
Jun 16, 2021 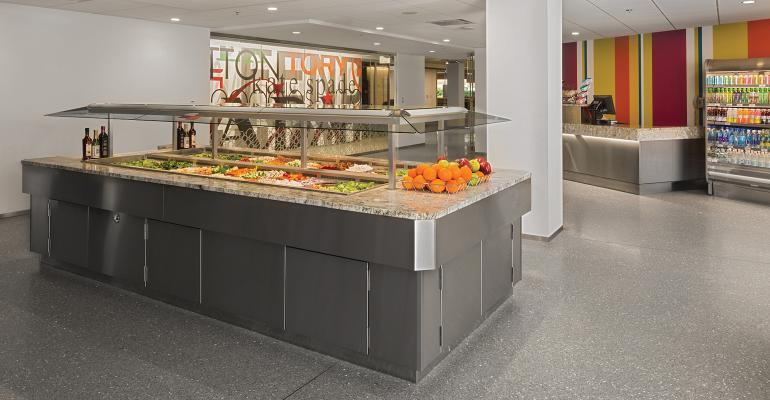 The salad bar area at the Plum Market operation for B&I client Taubman.
Plum Market operates at 10 private school and corporate sites plus at a major airport, and is on pace to add more accounts in those and other segments.

Ten years ago, Plum Market was one of a number of local retail gourmet grocery startups popping up all over the country to take advantage of consumer demand for natural, specialty and organic foods and beverages. The company, based in Farmington Hills, Michigan, quickly grew in its home state and entered the Chicago market in 2013.

It currently operates six stores including a hybrid operation at Detroit Metropolitan Airport that offers a mix of retail packaged goods and prepared foods to go. A seventh store is slated to open in midtown Detroit next year.

But retail expansion is only part of the story. Seven years ago, Plum Market was approached by the headmaster at Detroit Country Day School to take over management of the onsite meal service there.

“He said he’d like to meet about foodservice and I took that to mean catering,” recalls CEO Matt Jonna. “We had been doing catering for the school, which had four campuses around one of our stores.” Detroit Country Day is a substantial operation with some 1,800 students, faculty and staff.

It turns out the headmaster wasn’t interested in Plum Market’s catering but wanted the store to operate its cafeteria, which at the time was being managed by a traditional onsite dining contract company.

“They were really unhappy with them and wanted to find a provider that did natural and organic,” Jonna says. The headmaster explained to Jonna how much he liked the Plum Market retail stores and said, “I think this is something you should look at,” Jonna recalls. “I said, ‘Well, that’s not really what we do.’”

But the headmaster was persistent, and eventually Jonna relented. What helped ease the transition, Jonna notes, is Plum Market’s established in-house expertise with high-quality prepared foods made with natural and organic ingredients—a signature feature of its retail stores.

“We have a database of over 3,000 recipes in our stores and have basically integrated those into our foodservice division,” Jonna says. With that and its existing in-house expertise with volume food preparation from its prepared foods and catering operations, Plum Market was able to adapt readily to the onsite café environment.

The company hires outside talent as needed but most is already available inside the organization, Jonna notes. In fact, having a foodservice unit gives employees an alternative that might better fit their lifestyles and personal preferences, which serves as a boost to overall employee satisfaction inside the company.

Today, the Plum Market Food Service unit operates at 11 sites under either the Plum Market Kitchen (corporate dining) or PlumSmart (schools) brands, with expansion in those segments as well as into healthcare institutions, colleges, airports and sports facilities actively being cultivated. The Food Service unit currently serves about 5,000 customers a day, and that could double in the next 24 months as a slew of new accounts come on line, says Jonna.

Current locations include not only Detroit Country Day but also Grosse Pointe Academy in the private school segment and Lear Corp., Magna International, Taubman Centers and Williams International on the corporate side.

Because of its divergent business interests—which also include event and social catering, online retailing/delivery and the licensing of its brands like Plum Market Kitchen—Plum Market regards itself not so much as a grocery retail chain but rather as a “food and beverages services business,” Jonna emphasizes.

Expansion of the foodservice unit initially took place mainly by word of mouth. For example, the initial contact with Lear came because a company executive had a child at Detroit Country Day. Lear in turn referred Plum Market to Magna (both companies are major suppliers to the automotive industry).

The Detroit airport location was the result of a supplier relationship with a local firm called Zingerman’s, which asked Plum Market to partner on the location after the airport issued an RFP looking for local brands to fill the space.

Opened in 2015, the Detroit airport location has been a “massive success,” Jonna says. The 3,000-square-foot store carries an array of natural and organic snacks and prepared foods from both Plum Market and Zingerman’s, a diversified food supplier that originated as a deli but now produces everything from baked goods and candy to coffee and cheeses. The airport store also includes a wine bar and a Zingerman’s branded coffee bar. The partners co-brand on the store marquee, which reads “Plum Market featuring Zingerman’s.”

As for the future of the foodservice end, “we want to go national,” Jonna says. The company’s existing onsite dining accounts are all currently located in Michigan.

Another area of potential growth is in the unmanned micro market area. Plum Market’s first such unit is slated to open next spring as part of the cafeteria at client site Williams International, where it will enable onsite staff there to access snack and beverage options around the clock.

Online ordering is another potential growth area. Plum Market already partners at its retail locations with online ordering/delivery services like Instacart and GrubHub, though at this time online commerce is “not a huge part of our business,” Jonna says.

The company also just launched its own app that allows retail customers to order catering services, and this is something that will eventually be extended to foodservice sites to enable employees to preorder food they can pick up quickly.

Language matters when it comes to selling plant-based dishes
Jun 27, 2017