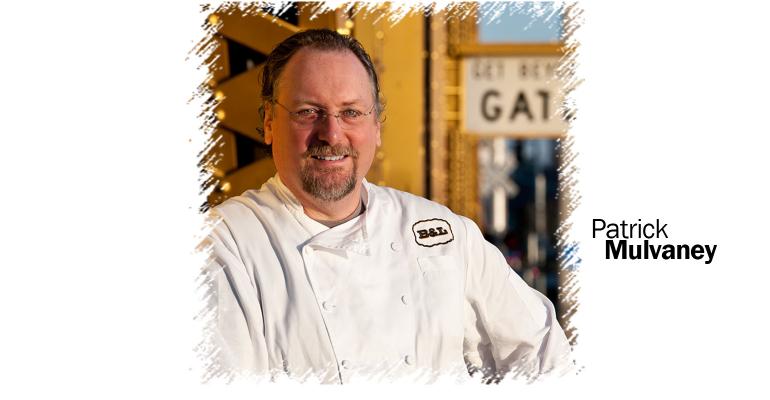 Chef Patrick Mulvaney's California restaurant has become a hub for food thinkers and ag bigwigs to enjoy a local, seasonal menu and talk turkey about the future of food.

Chef Patrick Mulvaney runs Mulvaney’s at the B&L, a farm-to-table institution in Sacramento, in the heart of California’s Central Valley. A New York chef by trade, Mulvaney fell in love with the farm and food culture of Sacramento before opening his restaurant 10 years ago.

Mulvaney’s has since become a hub for food thinkers and ag bigwigs to enjoy a local, seasonal menu and talk turkey about the future of food. Mulvaney talks here about his close-knit network of farmers and building relationships to last for generations.

What’s the philosophy behind Mulvaney’s at the B&L?

Patrick Mulvaney: We opened in 2006. It’s a menu that changes daily based on what’s coming in. Yesterday, my neighbor gave me the first sugar plums, so there’s duck with sesame plum sauce. Chris Rob just brought a pig down from Ukiah, so we’re going to make porchetta, which will probably be on tomorrow night. And then hams will get cured for coppas and prosciuttos. One of the new kids will have a chance to take a crack at head cheese and guanchiale.

For us the idea has always been about the sourcing and, in the end, the relationship with the farmer. Here in California it’s really easy. We got invited to cook at the Beard House, and some of my snobby friends from New York came down. They asked, “What is this farm-to-fork? We read about it in the Times.” And I say that the seven-course meal you eat in New York is what we eat here as a matter of course. And every ingredient, with the exceptions of bread, water and Irish whisky, came from 50 miles from my restaurant.

How do you define local?

PM: I use this story from Paul Muller of Full Belly Farms. Somebody asked him what his definition of local was. Fifty miles? One hundred miles? Day’s drive? And Paul says, “My definition of local is if there’s a relationship between me, the farmer and you, the end user.” For us, that extends fairly far. We purchased a whole crop of coffee from Luis Nolasco in Honduras. The distance is different, but the act of going to his farm, shaking his hand, walking the fields, seeing his practices—that’s all the same.

How do you manage such an extensive network of farmers?

PM: As chef it’s easy. I just have to say, ‘Yes, bring it in.’ Logistically, when I started 30 years ago, it would have been a nightmare. We have an email account for the restaurant and the farmer will hit us up: ‘Hey chef, we’re doing some hogs. Do you want one this week?’ Yes.

Here in Sacramento, there have always been a few farms that came into the city—River Dog, Full Belly, Good Humus—that had connections with chefs. With email, it becomes much easier, and once you’re on the list you stay on the list forever. Then you know River Dog comes in on Tuesdays, Heidi Watanabe comes in on Wednesdays. That’s not unique to Mulvaney’s. We each have our own relationships.

What is unique here was kickstarted by Jim Mills from Produce Express. His job is to go find local produce, and he would call: ‘Hey, I’m in a peach orchard. I’ve got two cases that need to be used right now and I’m going to have 20 cases per week for the next four weeks. How much do you want?’ He’s cultivated a relationship with those farmers, so many of our small farms go through Produce Express.

Sacramento customers know the farmers and expect that everything will be seasonal. The biggest change is that people now are surprised or disappointed to see a tomato in February or asparagus in July. The first 18 months we were open, people would come in and say, ‘Oh, last time I was here I had this and I really liked it.’ Well, that was fall. This is summer. Now other customers will just tell that person, 'Hey that’s not how it works. Dude’s got something new.' That’s been really gratifying over the last 10 years.

Has your attitude toward food waste changed over the years?

PM: Our attitude toward waste in our own kitchen has changed dramatically. We used to compost about three garbage cans per week of pre-consumer waste: husks, skins, stock vegetables. But now, there’s a large anaerobic digester at a nearby cardboard plant. And they figured out that they needed nitrogen to fuel the digester. They’ve reduced our landfill production from three dumpsters per week to less than a five-gallon bucket.

We also take cooks to a pig slaughter, a matanza. It’s very serious and very moving. And I tell the kids in the kitchen, “We say thank you to the animal.” Seeing that pig’s life end, and then seeing it get butchered and sent to the restaurant really has a dramatic impact on people that go see it. And for about two months after we go to a matanza, waste—things like burning onions in a skillet or not scraping out the last of the mustard—cuts down at least 20 percent to 30 percent. You’ve looked in the eyes of the pig and you had to say thank you.

Any advice for a farm-to-table entrepreneur?

PM: The important piece is to talk about how you’re sourcing. I go back to the Paul Muller quote: Knowing how something was produced, where it came from, who the family is—it really goes a long way to increase your comfort. It took us many years, but our regulars know that when they come in our organization has ensured sustainability. It takes a while to build up that trust, but it is clear that there is a lot of interest in it. From a marketing or financial point of view, it’s a smart money bet.