HomePeople and Company ProfilesHigh standards, transparency and an up-close view of retail bring success for Now Foods
Recent
Latest
4 tips to get ahead of chemical concerns in packaging
May 20, 2022
7 CBD favorites in the increasingly popular gummies format
May 20, 2022
Mission MightyMe helps parents introduce allergens to babies
May 20, 2022
UNFI's Eric Dorne to step down as chief operating officer
May 20, 2022
Trending
Whole Foods' honors 30 companies with 10th annual Supplier Awards
May 18, 2022
Getting ready for 2023: Trends for brands to consider
May 17, 2022
Sponsored Content
The rise of sustainable business – eGuide
Sponsored Content
Natural beauty market trends
Jun 16, 2021 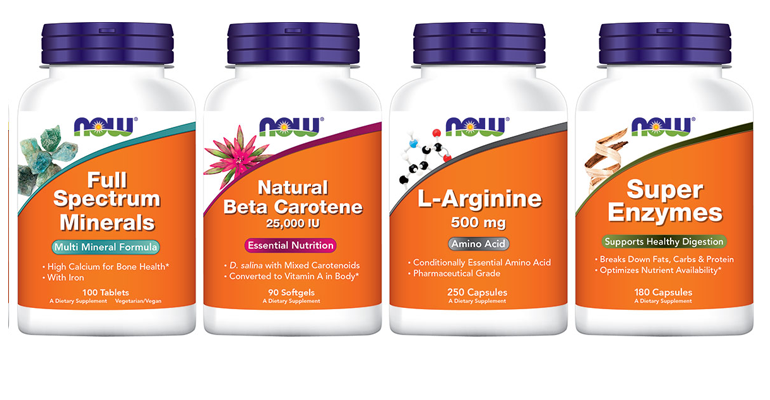 As the brand celebrates 50 years in business, CEO Jim Emme reflects on the importance of brick-and-mortar retailers, influencers and trust in the supplement industry.

From a beginning in independent natural retail to a brand with value pricing and some of the highest sourcing standards in the industry, Now Foods stands out as a legacy stalwart for transparency and quality. Now, marking 50 years in business, the company also stands out as an example of how staying close to those roots and sticking to those values can lead to success.

We talked to CEO Jim Emme about how and why that combination works. Now Foods got its start in retail. How does that that influence the way you approach business?

Jim Emme: We've got 13 retail stores in the Chicago area called Fruitful Yield. The retail division of Now really started out in 1962. Elwood Richard founded that and he was a retailer, and then the Now brand was developed in 1968, really as the house brand for the Fruitful Yield stores. It influences us a lot because we have direct contact with consumers. We see product trends. We know what's hot and what's not, and it really has us on the ground and understanding it. It shapes product development. It shapes our training plans for retailers and consumers. It shapes our values. Because we are a retailer, our values continue to align a lot with independent retailers and also natural chains that we've really grown up with. Our retail roots, I think, give us insight and advantage that a lot of companies don't have. There are some companies who do have a retail presence, but not many with actual brick and mortar stores like we have.

JE: One Saturday I was in one of our stores, and the staff was getting slammed. There was a lady who was interested in a product and she made it pretty tough on me. She was looking for information, and I fully understood that as a retailer, and I wanted to help her out, but I also wanted her to buy something. And as the CEO of a company, that really gave me good insight as to what the retail people go through. She was asking some hard questions. She didn't want the Now product, didn't want a New Chapter product. I ended up selling her a Megafood product, but that was OK because she was pleased with the choice.  How many supplement companies meet their customers in the aisles? How many leaders within those companies get the opportunity to experience that firsthand? Frankly, it makes us loyal to the people who are providing that information. We're kindred souls with brick-and-mortar retailers and we always will be, because that's where our roots are.

Does Amazon buying Whole Foods affect the relationship between supplement companies and retailers?

JE: The big piece is we count on the retailers to communicate to consumers. Every year I ask retailers what are the top three things they like about the Now brand. No. 1 is always value, and that's the best quality product at the best possible price. It may not be the lowest price, but we back up the quality of our products. The second is that we've got a large selection of products. We've got more than 1,400 SKUs in our catalog, and we've got about 950 supplements. It's really almost like a one-stop opportunity for retailers to find products that they're looking for. But the third thing has shifted. It used to be that we were easy to do business with. If they had a return, we wouldn't give them a hard time. We'd make it really easy for them to do it, or if they had questions, or they needed technical training or support, we could provide that. But last year, in 2017, that shifted, and it shifted to the word trust.

How do you earn that trust?

JE: The biggest factor in that appears to be the fact that we're one of the few and definitely one of the largest family-owned companies left in our industry. You know, there's been a lot of consolidation going on, most recently Nestle buying out Atrium, which scooped up Garden of Life. Two things happened the next day. We had several customers coming into our Fruitful Yield stores asking for alternatives to Garden of Life because they were concerned about Nestle changing the products. And we assured them, 'Look, the takeover was announced, the acquisition was announced yesterday so the formulas haven't changed, so don't jump the gun.' But the biggest thing that we hear about that, is they're like, 'Well, you're still a family-owned company. We trust your brand, and we trust your commitment.'

But you don’t tell that story on the label.

JE: We're doing a lot more social media efforts than we used to. We're working with influencers, bloggers—even chefs and cooks are blogging about our food products and also our supplements. So that's a trend that we've been moving to, to get the word out, and it's been pretty effective for communicating directly to consumers.

With all these different avenues of communications, what do you see in the future for supplements then?

JE: I see the future for supplements is going to continue to be influencers more than anybody else. You can communicate the information to an influencer, and they may have 60,000 followers on Instagram. They may have 30,000 subscribers to their blog. I also think that there's probably going to be some interesting efforts with devices like Alexa and the Google devices. I see Amazon and Google probably selling ad space in those.

Do you think that influencers cut through the “study of the week" noise?

JE: Most of them do because they're real people, and they're people that consumers can relate to depending on their goal. There's one gentleman who lost 170 pounds and he became a personal trainer, and he was still challenged. He was still trying to maintain his weight and people were relating to it because as he writes his blogs, they're really about the struggles he has each day to try to maintain the discipline of it. And I believe that that builds trust with followers, and it resonates with them because there are a lot of people out there that feel that, 'You know what? That's me too. I get that. I understand that.' I think building that trust with their followers helps them cut through the fog of paid ads.

Do you think influencers are joining retailers as the gatekeepers?

JE: I think it is a barrier to entry that the industry needs, because when we have the influencers visit us, we have them tour our main facility here. When they go through and they see the over $100 million dollars in laboratory equipment, when they hear that we do 16,000 tests a month for quality in our manufacturing processes, when they meet the Ph.D. chemists who are not only testing products with the equipment that we have but also developing methods that can be shared throughout the industry to assure the quality, they're sold.

Whenever I do the introduction to the influencers, I say, 'There's one ask I have from you. Tell us if you trust us or not, and tell us if you trust our industry.' Most of them have never been in to a supplement manufacturing facility. But if they go through a manufacturer that has quality processes, quality facilities and quality people, they get it and they're sold. And they're enthusiastic about it.

JE: Yes. We do have a responsibility. We’ve got to maintain the trust not just of the generations of people and consumers who've trusted us all this time, but also to the generations in the future. And that's why we’ve got to use different forms of communication to get the word out to consumers. Marketing is completely changed today from what it was even five years ago. We have to maintain trust, but we also have to make an extra effort to communicate why. More than ever, I think there's agreement in the industry about what we need to be cautious of and the responsibilities that we have to consumers, and that message is getting more and more consistent.

But are you worried with the new administration de-emphasizing that?

JE: Yeah, although they've said that they're not going to be cutting the FDA's budget. It seems like the FDA's carrying on business as usual, but the bad news is they've been underfunded for years. So it's a problem that's continued with the current administration in regards to our industry. Not much is getting done, and sure, tax reform went through. That certainly has affected us as a privately held company. We've got some decisions to make regarding how we're organized as a company, but the reality of it is we don't see much change happening in Washington right now in regards to our industry.

JE: In regard to business, I'd have to say the biggest one would be a consumer getting extremely ill or dying from consuming a natural product. First, that would be the ultimate tragedy for we companies that are branded and make consumer products. It wouldn’t matter if it were our brand or anybody else's brand. We would all be affected negatively on that, because there's still a negative perception that we're all a bunch of cowboys and snake oil people that don't follow the rules, that don't have great quality products. You look on the internet, look on Amazon. There are brands that are popping up that are incredibly cheap in price, but they don't say much about what's on the label. You'll see the brand out there for maybe a month or two, then they disappear, and I know that they're not doing testing if they're selling at that price. What's in that product? What if it were adulterated? What if it had a toxin in it that nobody had tested for, and what if somebody buys that supplement and gets sick or passes away? That's a big concern, and to me, empowering the FDA to enforce the regulations can make a big difference in that. So that's where we're at on the regulatory environment.

Now is celebrating 50 years in business. What happens in the next 50 years?

JE: Well, I hope that we're going to continue to be a thriving entity that is still owned by the Richard family, that's continuing to help people around the world to achieve their goals, and that we stay true to our mission to provide value products of high quality. Right now we're in 80 countries. I hope 50 years from now we're in over 120 countries if we can. I also hope that the world is more peaceful in 50 years, because that certainly would provide an environment for all of us to help each other out. But as for now, I hope that as a company we remain independent, we remain strong, and we remain true to our values and our culture.

Is the industry doing enough to promote basic nutrition?
Jun 08, 2017