Hope for a food system (and planet) in crisis 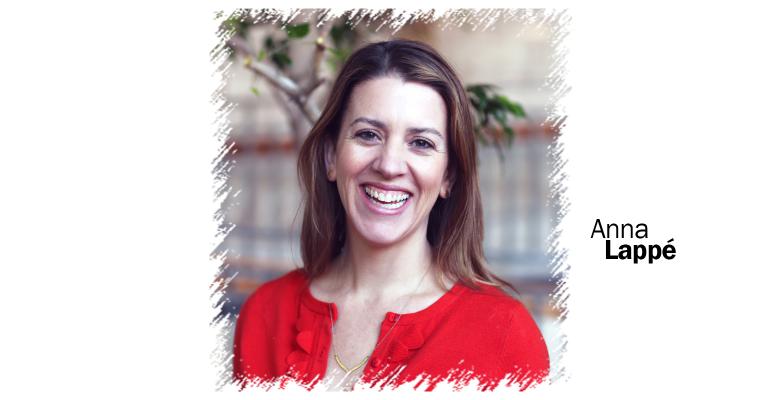 Anna Lappé was practically weaned on the principles of food justice. The daughter of Frances Moore Lappé, with whom Anna wrote the book "Hope’s Edge," she is no stranger to the power of food systems.

Today, she works vigorously at the intersection of environment, health and justice through her work with the Small Planet Institute, Small Planet Fund and Real Food Media. In these programs she raises both awareness and money for on-the-ground, solutions-focused projects around the world.

Lappé is the author of three books, including "Diet for a Hot Planet," and contributor to several others; a frequent speaker and talk show guest; and winner of multiple honors.

What can we expect to hear from you at Expo West?

Anna Lappé: One of the messages I’m excited to bring to the expo audience is just how much progress I think we have made as a movement in awakening the public to the crisis in our food system—its environmental impact, its social justice impact, its health impact—and the many solutions that are out there. In a lot of ways, it is kind of the overarching message of so much of my work.

Can you talk a little bit more about—and about the intersection of—those impacts?

AL: Our food system is one of the biggest sources of water pollution and air pollution. It's the single source of dead zones in our oceans that are killing aquatic life. It’s also the source of so much ill health: the rising epidemic of diet-related illnesses. Both of those things, the environmental impact and the health impact, are being borne disproportionately on our most vulnerable populations. Those communities that are living in the shadow of chemical manufacturing plants tend to be our lowest income communities. Those communities that have the highest rates of diet-related illnesses, diabetes, and heart disease tend to be our lowest income populations, and populations of color.

There is this inextricable link between our vision for greater equity and social justice in the world and needing to change the food system to make that vision a reality.

AL: I’ve often said, “if we're serious about fixing the climate, then we have to talk about food.” One of the things that I find so fabulous about bringing the global warming conversation to food is that the food system solutions that are going to help us reduce emissions from the sector—solutions like growing food organically, eating more food locally, using less packaging, reducing food waste—are the very same solutions that are going to produce healthier, more sustainable food.

AL: My mother, Frances Moore Lappé, and I started the Small Planet Institute and Small Planet Fund after we wrote a book together called "Hope's Edge" that, for me, was a life-changing experience. Together, we traveled to India, Bangladesh, Poland, Kenya, France, Brazil… and Wisconsin and California. We were uncovering solution stories we wanted to amplify, showing how you could actually have a food system that promotes a healthy environment, equitable distribution and health.

When we were done with the book, we kind of just didn't want it to stop. We wanted to keep sharing those solution stories and what my mother calls "living democracy." The Small Plant Institute was born out of that. The fund came out of our desire to give back to the groups that we saw on the ground.

The focus of my work today is in two places. One is Real Food Media, a project I run with Christina Bronsing-Lazalde, as well as work that I'm doing for a private family foundation to create a grant-making program that, again, is supporting who I really see as some of the leading lights that are promoting food systems transformation.

Can you say more about your mother, her influence on you and your work together?

AL: My mother, Frances Moore Lappé, is definitely one of my all-time heroes. It's been such a privilege in my life to work so closely with her. She, as some of your readers might know, wrote a book when she was just 26 years old, called "Diet for a Small Planet" that went on to sell three and a half million copies and really revolutionized how people thought about their own diets and about world hunger. What she came to realize is this fundamental idea that hunger is not caused by scarcity of food—it's caused by a scarcity of democracy, scarcity of people having power over what food is grown, how it's grown, who has access to it.

Still today, there is more than enough food produced on the planet to feed every one of us, and yet 800 million people are going hungry. You have a global pesticide industry that tells us any chance they get that we need their chemicals to feed the hungry world. We hear from the industrialized animal livestock sector that we need to further industrialize and use more drugs and more antibiotics to produce more to feed the hungry world, when again, the evidence shows us that we could continue to produce more than enough food to feed everyone and that would not end hunger. It has never ended hunger; it is currently not ending hunger. The real solution to hunger is to build real democracy and real power on the ground, among consumers and farmers and communities.

AL: I think for a lot of people this is really a dark time. One of the biggest lessons I learned when we wrote "Hope's Edge" is that you don't find hope by seeking the evidence for it or by deciding your cause is winning or losing. Instead, you can really become hope through taking action and being part of the solution and the change you want to see in the world.