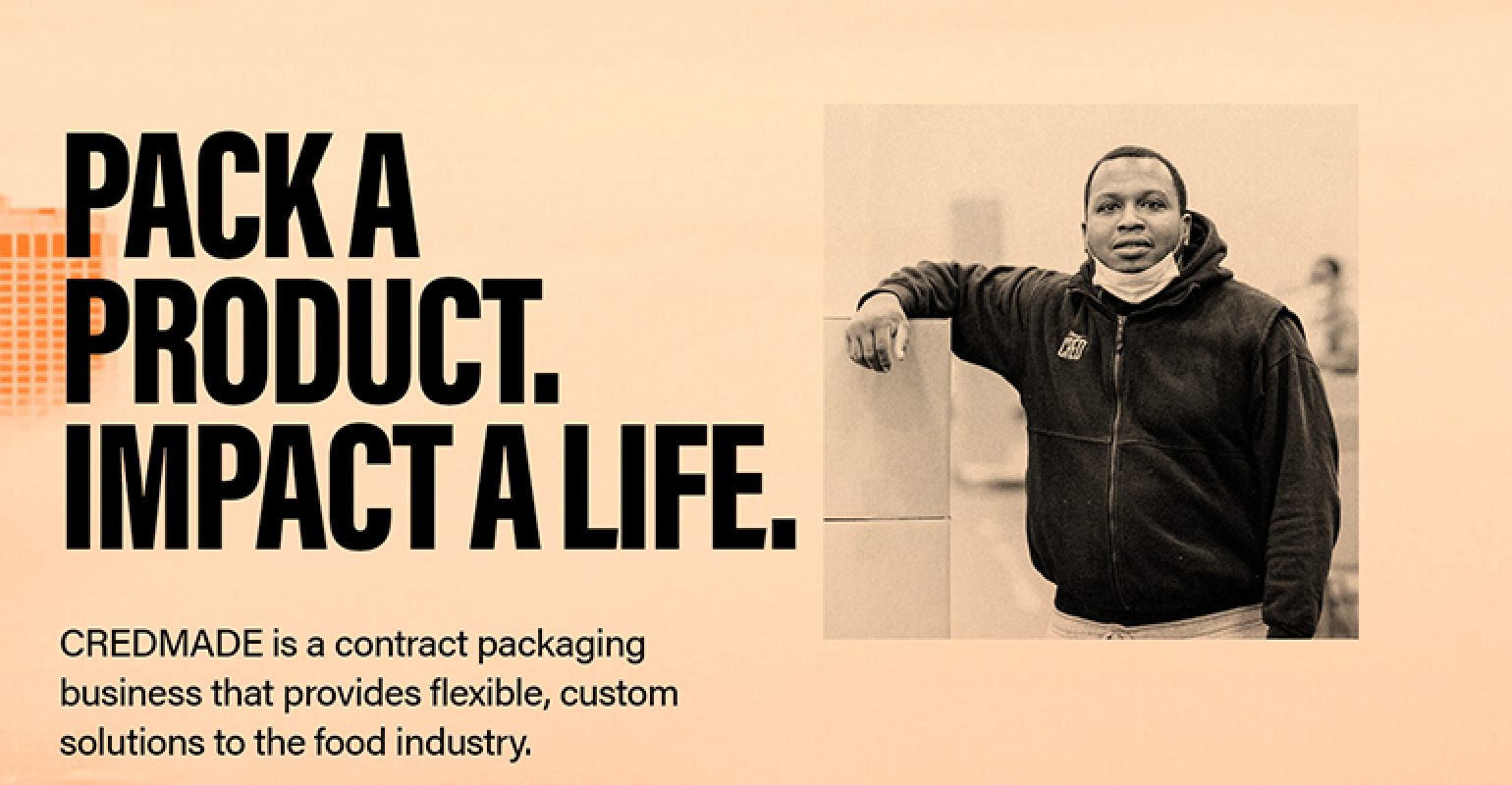 Find out why the Chicago-based food copacking initiative, spearheaded by former United States Secretary of Education Arne Duncan, has piqued the interest of retailers, brands and distributors nationwide.

A growing focus of the natural products industry is maximizing impact on the triple bottom line: people, planet and profit. This is epitomized by the efforts of Arne Duncan.

Duncan was U.S. Education Secretary under President Barack Obama and recently collaborated with Chicago-area at-risk leaders to launch CREDMADE, a food copacker. This business is a key priority of the nonprofit Chicago CRED, which is combatting gun violence in underserved neighborhoods in Chicago by providing jobs and economic opportunity for young people at the highest risk.

Duncan has experienced the pain of gun violence for most of his life, a reality that has driven this next phase of his career. As a Chicago teen he lost some friends to shootings in the city. Later, when he was CEO of Chicago Public Schools, a student was killed on average every other week because of gun violence in their neighborhood. “It was so difficult going to funerals and meeting families,” he said. “Ultimately you’re confronted with an empty desk and trying to make sense of the senseless.”

After he wrapped up his time in Obama's cabinet, Duncan returned to Chicago with a singular goal: to dramatically reduce gun violence in Chicago. This was a daunting task as Chicago’s numbers were bleak; it is the third largest city in America, but has more homicides annually than New York City and Los Angeles combined.

To create that kind of impact, Duncan was going to need resources. As luck would have it, at the end of the Obama administration he connected with philanthropist and entrepreneur Laurene Powell Jobs who founded Emerson Collective, an organization that deploys a range of tools in pursuit of a more equitable America. “Laurene wants to take on some of society’s most intractable problems and was attracted to the degree of difficulty and the importance of the mission of what we planned to do,” Duncan says.

So, in 2016 Duncan created Chicago CRED in partnership with Emerson Collective. CRED takes a holistic approach to reducing gun violence by working directly with people who are most likely to shoot or be shot. It exists in the 15 neighborhoods in Chicago where gun violence is most prevalent and use a four-tiered approach: Street Outreach, Coaching and Counseling, Workforce Development and Advocacy and Prevention.

CRED works individually with program participants to help them figure out what their passion is and then give them training, internships and life coaching to put them on the path to employment. People who successfully complete the program are then eligible for job placement at companies like DLA Piper, FH Paschen, Laine’s Bake Shop, Pullman Innovations and Blommer Chocolate. 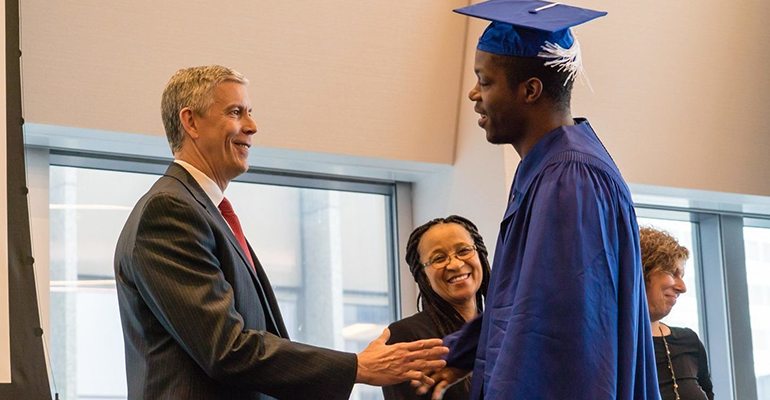 The program has been successful. Since 2016, Chicago CRED has directly served over 500 people, plus supported hundreds more through partner programs. On the workforce development front, CRED has tutored and supported over 100 new highschool graduates and over 250 job placements. Yet Duncan and his team realized that they could use more well-paying jobs that are tailored to the skills of the graduates from CRED.

That’s where CREDMADE comes in. With financing from the Emerson Collective, CRED launched a copacker in Chicago focusing on dry foods, especially snacks and confections. It’s located on the south side in a neighborhood with many Black residents.

“CREDMADE is creating an environment for an untapped talent pool to thrive and build careers,” says Rahul Pasarnikar, who co-founded the company with Duncan and serves as its president.  “We believe bringing investment back to Chicago’s South and West sides—neighborhoods that have been disinvested for decades—is a critical factor in reducing the cycle of poverty, crime and violence. Our employees are every bit as skilled and talented as their counterparts in other parts of the city; they just need a platform to excel.”

Because Chicago is home to a number of the largest food companies in America (Kraft Heinz, Mondelez, Mars, ConAgra and more), Pasarnikar is actively seeking partnerships. CREDMADE has also started discussions with a number of retailers that are interested in private label opportunities.

One of their key partnerships is with KeHE, the largest distributor of natural, organic, specialty and fresh products to more than 30,000 natural food stores, chain and independent grocery stores, e-commerce retailers and other specialty products retailers throughout North America. President and CEO Brandon Barnholt is excited to help this new initiative to succeed, saying, “CREDMADE is a sustainable business model that focuses on serving their  employees and local neighborhoods. Their mission to invest in communities and people aligns closely with KeHE’s core values and we are looking forward to building our relationship with them in Chicago."

CREDMADE is making no small plans. It will create a national model for equitable economic development by providing the most thoughtful and innovative culture for an untapped talent pool to thrive. It aims to become talent pipeline for Chicagoland’s manufacturing industry and share the model across other cities.

Some long-term goals include:

Will Madden, co-founder of Whole Brain Consulting, a leading consultant in the copacking industry is bullish on CREDMADE: “The opportunity for growth in the copacking space is significant. CREDMADE has invested in a state-of-the-art facility and equipment. They have the flexibility to scale with growing brands and tailor their capabilities with strategic customers. Those same customers will benefit from the workforce CRED is developing.”

This copacking operation is the tip of the iceberg for CREDMADE. The program will continue to expand into capabilities and industries that can help develop real skills for tomorrow’s workforce.

Brighette Anderson, CREDMADE’s director of quality, is an original member of their management team. She brought with her 15 years of expertise in food safety and quality, but more importantly she was immediately drawn to the mission because it was important to her to see more diversity in the food industry.

“I want to work along with an organization that will assist in the professional growth and development of future leaders. Being a Black woman from the south side of Chicago I learned early to be resilient beyond the struggle. Having the proper guidance and/or mentor can make a difference in developing goals and having a prosperous future in the workforce," she says. "My hope is that CREDMADE will support the rebirth of  the Chicago food industry that rejuvenates the natural talent and genius already developed in our workforce.”

Jim Slama is the founder and CEO of Family Farmed and the Good Food Accelerator. He is also the managing director of Naturally Chicago.