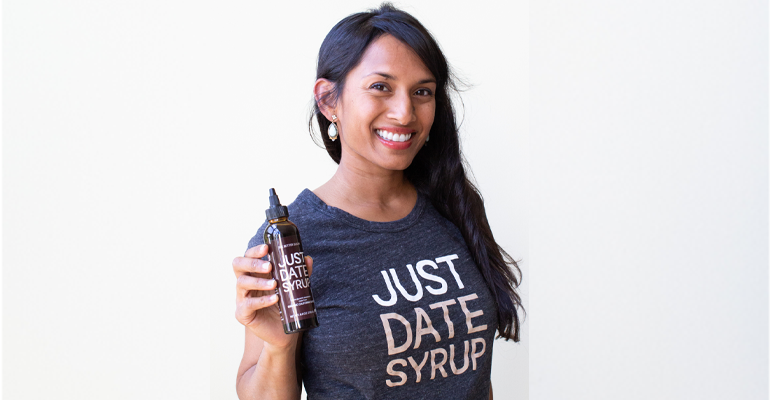 Sylvie Charles, CEO and founder of Just Date Syrup—a Pitch Slam semifinalist—is preparing for the worst while hoping for the best in her supply chain.

As former University of California San Francisco general physician turned entrepreneur, Sylvie Charles understands better than most natural food business owners what COVID-19 might mean for the health of the general population and her company.

Charles is the CEO and founder of Just Date Syrup, a Pitch Slam semifinalist from Natural Products Expo West 2020.

“I’m in close contact with all of my medical colleagues who are working on the front lines, trying to understand exactly how long this is going to be for and how it will impact us,” says Charles from her home in San Francisco where she is sheltering-in-place with her husband and their 18-month-old daughter, Aya. “I think we’re going to see a big spike over the next couple of weeks. That’s something we all need to prepare for. For my business, I’m trying to imagine the worst-case scenario and build my company’s decisions around that.”

For Charles, that means imaging the next six months—the life cycle of her production run—as if there’s not going to be the ability to produce food.

“And that is guiding all of my decisions right now,” Charles says.

She’s shifting some of her budget from in-person marketing to stocking her warehouse inventory as fully as possible while Just Date Syrup is still allowed to engage in food production by the state, Charles says. That means doubling her inventory of date syrup from 80,000 to 160,000 bottles and pomegranate syrup from 40,000 to 80,000 bottles.

“It’s going to require us dialing into a lot of our working capital,” Charles says. “But I do think it’s necessary to behave as though more people are going to get sick and the supply chain is going to be impacted.”

It’s not an easy task, especially for a company with three full-time employees, including herself that doesn’t have venture capital funding and includes a shared third-party warehouse in Richmond, California, that has already reduced its staff of 20 employees to two.

She’s stripping back nonessential payments to preserve cash and ensure her two other full-time employees, a chief marketing officer and a sales and data analyst, are paid and have health insurance.

“We don’t know if any of us are going to get sick,” says Charles, who says her CMO is the back-up if she gets sick. “Right now, we’re focused on selling as much product as we can to the customer at home, while people are still buying and delivering to our distributor and retailers, while preparing for the possibility of workers getting sick and the supply chain shutting down.”

To help drive sales, Just Date Syrup has ramped up its online marketing efforts, sharing baking recipes on Instagram that soon will be coupled with live cooking demos and classes. “We’re really trying to encourage that digital connection,” says Charles, who also plans to do giveaways so four friends can create their own cocktail box to do a virtual happy hour.

While Amazon is still Just Date Syrup’s primary e-commerce platform, they are also trying to sell more directly to consumers via its website.

“We’re just taking it day by day,” Charles says. “We’re not a VC-backed company, so it’s not like we have a very large cash cushion. But we know we can sell this product as long as grocery stores are open.”

How the coronavirus pandemic is impacting farmers
Apr 03, 2020