How a student-run, farm-to-table sauce business is breaking the cycle of poverty 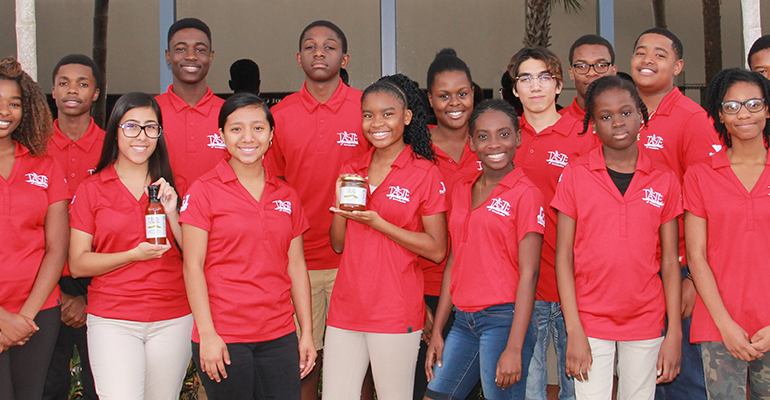 The enterprise's fresh, locally sourced ingredient lists and wide variety of salsas and hot sauces are just the tip of the iceberg.

Immokalee, Florida, is a town known for agriculture, and a coalition of farm workers has made headlines in recent years because of fast food restaurant boycotts and other campaigns targeted to increase wages in the fields. A few years ago, several students decided they also wanted to find a way to keep more of the economic benefit from the town’s agricultural base in the town itself. They wanted “to use the agriculture of our town of Immokalee to give back to our community,” according to Yvelande Astreide, a college sophomore and student alumni of Taste of Immokalee, a student-run social enterprise that sells products made from the copious amounts of fresh produce growing nearby.

The students turned to their families for recipes—most of them are immigrants from any number of places, from Haiti to Mexico, and the group together had a rich culinary history to tap into. They started with fire-roasted tomato and jalapeno salsa and now have six different products, a mix of salsas and hot sauces, that they sell online and increasingly through retailers (including some Publix stores) and to institutional purchasers such as college campuses.

Taste of Immokalee (TOI) is growing more than its line of SKUs, though. Perhaps the larger goal is to provide mentoring and training in business skills for local students, so that they’re better equipped for college and more long-term for navigating successful careers. That’s important in a town where agriculture is so dominant, and some may not think about possibilities beyond farm work.

“We realized that students are not getting what they need at school just from the books. With textbooks, the learning stops there—they don’t get any hands-on experience,” said Marie Capita, TOI’s executive director. Through this program, however, they get hands-on experience and then some. “They’re actually running the company.”

The founding students have since graduated high school, but they remain involved through TOI’s college advisory board. They can promote the brand in their newfound communities—one student, for example, has managed to get his college to start buying TOI hot sauce for use on campus, and also serve as mentors for current students. “It’s a great relationship because the upcoming students can see what a hardworking commitment can do—that if they put as much effort into it, they can get the same result. They will get to go pursue their own career path,” said Capita.

Astreide, who is from Haiti originally, said TOI taught her skills and provided a strong community to belong to, in addition to building up her confidence in a way that may not have happened otherwise. “For me, Taste of Immokalee has changed my life,” she said.