HomePeople and Company ProfilesMegafood brings regenerative agriculture into the health and dietary supplements conversation
Recent
Latest
Innovation at Milkadamia is a weekly exercise
May 27, 2022
Sponsored Content
Are there potential carcinogens swimming in your biobased laundry detergent? – article
Rowdy Mermaid disrupts functional beverages with science-based innovation
May 26, 2022
Monitor: Environmental claims confuse consumers—even natural shoppers
May 26, 2022
Trending
Getting ready for 2023: Trends for brands to consider
May 17, 2022
Natural beauty market trends
Jun 16, 2021
The Planting Hope Company aims to prove gender equity leads to success
May 23, 2022
Podcast: What brands need to get on shelf at Fresh Thyme Market
May 24, 2022
NBJ
brought to you by 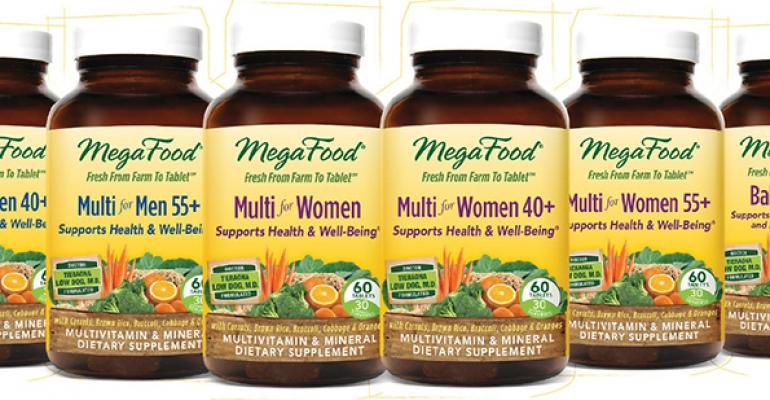 The whole food supplement company's effort has earned it the 2018 NBJ Award for Education.

Activism without a direct connection to the cash register can seem remarkably rare.

That’s part of what makes Megafood’s commitment to spreading the word about regenerative agriculture such a good fit for the NBJ Award for Education. Whether it’s staging rallies in Washington or taping public service announcements designed to spur action at a local level, the New Hampshire-based whole food supplement company is devoting time and dollars to a subject far too broad to fit on a label.

Megafood obviously holds more than a tangential connection to regenerative agriculture. The food in “whole food” supplements is grown on farms, after all, but Bethany Davis, the company’s director of advocacy and government relations, says the connection between the health of soil—and by extension the planet—is far from tangential.

That helps explain the path that Megafood hopes consumers will follow them down. The company has taken a very vocal stand against glyphosate not only as an end unto itself but also as a step toward understanding regenerative agriculture. The ubiquitous herbicide Monsanto sells as Roundup poisons more than just plants. It poisons the soil itself, and soil health is the most basic element of agriculture.

Framing the discussion so that Roundup is, essentially, an antibiotic cast indiscriminately across the landscape by the ton helps consumers understand the connections that go beyond herbicides in food. With growing awareness of the microbiome, it’s easier to explain that microbes are as essential to the soil as they are to the gut. And both are being impacted by glyphosate. “As a supplement company that sells probiotics, we care about gut health,” Davis says.

From there, it’s a quick trip to how soil health affects the nutrient quality of food and then onward to how healthy soil is not only a hedge against global warming, by being more resilient to both drought and flood, but eventually a source of climate change remediation, by drawing heat-trapping carbon dioxide out of the atmosphere and back into the soil. Megafood’s aim is to lead consumers down that path one step, and one connection, at a time.

That path was all but invisible to consumers not so long ago, but Davis sees a consciousness rising, with recent stories on the carbon-capture potential in such broad-reach mainstream media outlets as the New York Times and NBC News. “There’s definitely something happening,” Davis says. “People are getting it.”

Brands however, aren’t waiting for consumers. Megafood certainly isn’t. Their new Healthy Farm Standard program is requiring the farmers that supply the company to take concrete steps towards regenerative practices. But big brands aren’t ignoring it either. Davis points to General Mills’ recent commitments to sourcing from regenerative farmers. Applegate is leading Hormel towards regenerative agriculture, too. “Brands have such easily disrupted supply chains that they aren’t doing their jobs if don’t get their supply chain healthier,” Davis says.

But what Megafood is trying to do is show what’s possible for brands in terms of activism and education around regenerative farming. Megafood is not a big company, but it’s made a big commitment. The Ban Glyphosate Rally is one example. Recruiting independent natural retailers to help gather 80,000 signatures for a petition asking the EPA to ban glyphosate as a desiccant used for drying oats is another. The public service announcements make a difference. Backing an effort to take on glyphosate in the five boroughs of New York City brings the focus local. And page after page of information on regenerative practices on the Megafood company web site ties it all together.

“We want to teach people how to make soil healthier, to draw down more carbon,” Davis says.

“At the same time, we teach them how to engage their local parks department or their mayor or governor.”

United Natural Products Alliance President Loren Israelsen calls the company’s efforts something he’d like to see more of from supplement companies. “Their work on regenerative agriculture is literally going to breathe life back into dead and dying soil. Their efforts to teach us about the role of regenerative agriculture have been central to a growing understanding that organic and non-GMO are the foundation, but regenerative agriculture is the future,” Israelsen says. A healthy body is not possible without a healthy agricultural system, he says, and more supplement companies need to make that connection for consumers. “Imagine if there were 100 Megafoods and 1,000 Bethanys,” Israelsen says. “Our earth would have a fighting chance.”

Carbon Underground Chairman Tom Newmark, whose daughter Sara Newmark teams with Davis as Megafood’s director of social impact, would likely call “100 Megafoods” a good start but not enough. Supplement companies, more than almost any other industry, are already losing supply to climate change, and the entire industry needs to get more involved. Commitment like Megafood is displaying is all too rare, Newmark says. “I hope more companies jump on board, quickly. We need all hands on deck.”

That brands can be the educators is not unusual, Newmark explains. “It’s what happened with organic. It’s what happened on GMO, and it’s what will happen with regenerative, restorative, ecological agriculture.”

How one CEO took a supplement company from entrepreneurial to inspirational
May 01, 2018