HomePeople and Company ProfilesA new dawn, a new day for business
Recent
Latest
4 tips to get ahead of chemical concerns in packaging
May 20, 2022
7 CBD favorites in the increasingly popular gummies format
May 20, 2022
Mission MightyMe helps parents introduce allergens to babies
May 20, 2022
UNFI's Eric Dorne to step down as chief operating officer
May 20, 2022
Trending
Whole Foods' honors 30 companies with 10th annual Supplier Awards
May 18, 2022
Sponsored Content
The rise of sustainable business – eGuide
Sponsored Content
Getting ready for 2023: Trends for brands to consider
May 17, 2022
Sponsored Content
Unboxed: 7 plant-forward ice creams to stock this summer
May 10, 2022
Natural Foods Merchandiser
brought to you by

A new dawn, a new day for business 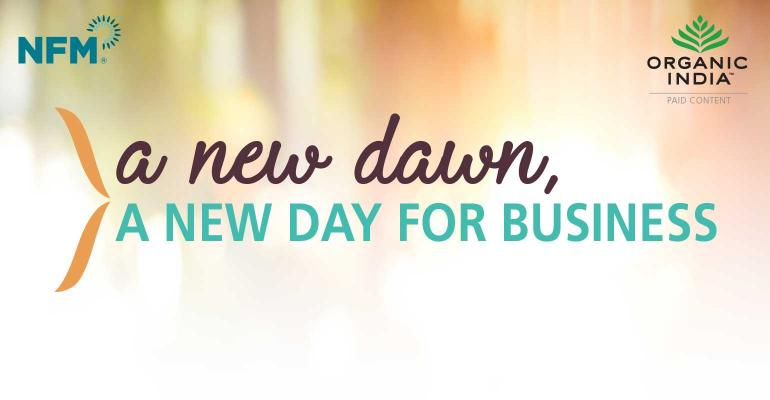 Values-focused companies unite to make the world a better place.

As fresh-minded companies focus on much more than just profits, mega-corporations have also started pursuing B Corp certification, training leadership in consciousness and building out complex, long-term plans to have a positive impact on people and the planet. Added proof of sea change: This year, BlackRock, the world’s largest investment firm, which holds $5.7 trillion (yes, that’s trillion with a “t”) in assets, demanded the companies in which it invests produce strategies for long-term value and social impact in the year ahead. Indeed, a new day for business, conscious business, has arrived.

Although not a new concept, it hasn’t always been in vogue, nor been backed by a definitive template such as B Corp certification, which started in 2006 and evaluates for-profit companies on social and environmental performance, accountability and transparency.

When the former Rudi’s Organic Bakery CEO Sheldon Romer joined Rudi’s in the '70s, he says “the notion of service was in the air.” But the focus, he says, was initially insular: improving staff conditions and wages. When a friend encouraged Romer to join the Board of Community Food Share, Rudi’s began to give all of the bread the company couldn’t use to Community Food Share. “The connection I felt to sharing our bread with people in need was instantaneous,” he says. “That was the first kind of moment where I really had a sense that you can do something as a business and contribute to your community.”

Over time, the buzzwords "profit, people, planet," have evolved, says Romer, who now runs his own executive consulting business, SB Romer, Inc. You had to think about the values and mission of your company to be in the natural products industry. “The word conscious is just another word for aware … being aware of the whole sphere of the impact that business can make. Are you building value through your own values as an organization?” Ultimately, Romer says business should be about serving others. “To me, it’s the highest kind of business imperative, to be of service to others to make other people’s lives better.”

Fast forward a few decades and Millennials are demanding a new type of business. “The millennial generation totally gets it and [they] want to align their investments with their values,” says Kim Coupounas, Director at B. Lab, which does the B Corp certifying. “They see what’s happening to the climate and the racial and income divides. They don’t want to just do what their parents did. They are saying ‘I want to find a job that is meaningful for me and work for a company that is doing the right thing and not just making a profit.’”

Conscious business doesn't have to mean less profit, says Kyle Garner, CEO of Organic India. Conscious business can positively affect profit, especially when it comes to millennial shoppers willing to invest in products that share their values. “A lot of those early pioneering leaders, who were proving that purpose and profit could coexist, were hoping they could demonstrate that you can do the right thing, help your people and still deliver a profit. What you see from B Corp published data is that growth rates are astonishingly higher for mission-driven companies.”

As the former CEO of New Chapter, Garner helped New Chapter obtain B Corp certification after it was acquired by Procter & Gamble. “We were the first brand to get certified following an acquisition by a multinational,” he notes. The reason? He wanted to make sure all the practices New Chapter had put into place before being purchased were codified.

The B Corp model also supports a "rising tides lifts all boats" mentality. As a certified B Corp, Organic India sees enormous benefits from being a small company that's part of an acknowledged conscious business network, a more collaborative economy. Competition still exists at retail, but the bigger focus is helping each other improve the supply chain and simply create better business.

“It’s like a chamber of commerce for conscious business leaders. It’s a great way to bring people together to share best practices and flesh out the supply chain,” says Garner. It also helps values-driven companies have a more well-rounded mindset. “It makes you conscious, mindful and aware of the good and bad at every stage and operation in a way that improves everything that is not optimal and even improving those things that are,” says Garner. “It’s always about putting in more than what you take out, whether soil, farmers, employees. Our goal is to add more value than what we pull out.”