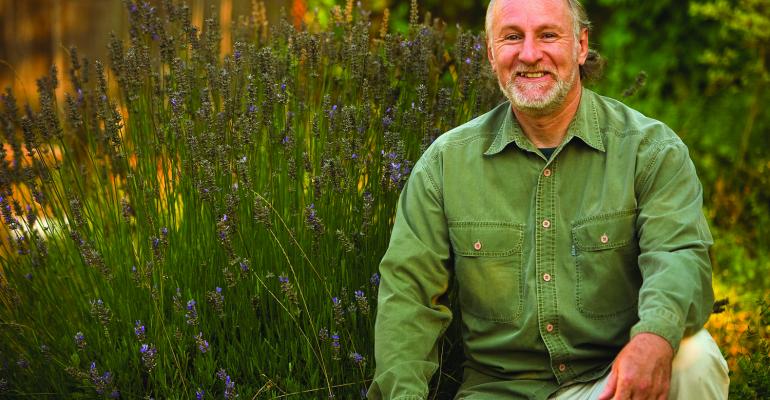 It was not the herbs that drew Roy Upton to the lore of natural medicine in the cookshack at the Meta Tantay community in rural Nevada. It wasn’t an ailment or need that brought him to the herbal arts.

But of course, he did not follow a smell to rural Nevada in 1981. “I was a city boy,” Upton recalls. “I didn’t know anything about herbs.” He was drawn first by an interest in Native American philosophy and, in particular, the teachings of Rolling Thunder, the shamanic voice who shared his wisdom from Meta Tantay. Upton had read of that wisdom, and “it touched me in a way that was very deep.”

But the smell and then the herbs and then the still-arcane knowledge of herbalism brought him to the path that, nearly 4 decades later, earns him the NBJ Award for Efforts on Behalf of Industry.

It would be another 14 years after sensing the power and the science on the Meta Tantay stovetop before he made his greatest contribution to the supplement industry with the founding of the American Herbal Pharmacopeia. In the years between, he became a student of herbs, first the learnings of the Native Americans, then herbal arts of Europe, Traditional Chinese Medicine and finally the Ayurvedic arts.

One thing followed another, and he recalls every step as obvious. “It was just the drive. That’s it. Period,” Upton says.

He was convinced enough of the power of herbalism to become a tireless activist for the passage of  DSHEA 25 years ago, working with people now considered pioneers of the supplement industry. “I really focused for three, almost four, years, doing nothing but stimulating grassroots support,” Upton says.

But among his travels, study and activism, he also saw what was missing. The United States Pharmacopeia was founded in 1820 on the need to standardize herbs. That was mainstream medicine 200 years ago. In the years since, herbs dropped out of USP’s focus as medicine pivoted toward chemical compounds and what we know now as the industrial pharmaceutical complex. Standards and monographs for herbs in the United States did not exist in the form Upton knew was needed.

It was another in that series of obvious steps. Something needed to be done, and he did it.

“All these questions were coming up for both sides. And you know, I was able to address them really well, because I knew the literature. But it made me realize that there wasn’t one place for this information to exist.”

So he built one.

American Herbal Products Association President Michael McGuffin calls out that roll-up-the-sleeves manner as one of Upton’s most remarkable qualities. Anybody else might have been intimidated by the depth of need that an American Herbal Pharmacopeia would address. Upton just did it. “He recognized that there were significant gaps in providing the level of information that’s expected of pharmacopeia monograms and, on his own initiative, he has worked to fill those gaps,” McGuffin says. “He made it his life’s work

That contribution has been an enormous gift to the industry, one that McGuffin wishes was better recognized. “There are pockets of the industry that do. But no, not very broadly,” McGuffin says.

American Botanical Council Executive Director Mark Blumenthal agrees. From Blumenthal’s perspective, Upton has provided some of the highest quality work on herbs produced anywhere. “The researchers, the health professionals and the consumers using those products, everyone’s benefiting from the work that he’s doing,” says Blumenthal, who describes Upton as “a tireless worker” and “a true believer.”

Upton calls the excellence that Blumenthal ascribes to AHP monographs as yet another example of a need that required an action. It must be done right. So it gets done right. Upton has no advanced degree or formal scientific resume to wave. He has instead a deep commitment. The simplicity of that sentiment doesn’t make it any easier. Upton calls himself a better researcher than business development whiz and says AHP still struggles to raise money. Like McGuffin and Blumenthal, Upton says he wishes the industry was more supportive “We can either do the work or we can do the fundraising full time, but we can’t do both.”

The support is necessary. The herbs and botanicals category is not short on challenges. Chief among them is adulteration ,and Upton says he believes the tried and true monograph system is a better answer than the next-big-technology fever that brings in DNA testing and other techniques he considers unnecessary and unwise. “There’s an answer to those challenges. And the answer is a monograph system,” Upton says. All the technology in the world is no good, he explains, if it “doesn’t train the people in the lab to know how to test.”

He is also disappointed in how the herbalism profession has resisted licensing regimens with state governments that would allow the practitioners to present themselves as legitimate to consumers who still harbor doubts, no matter how far into the mainstream herbalism gains interest.

Still, Upton describes himself as encouraged and enthusiastic. Herbalism was largely unknown in the mainstream when he began his journey. Now there are integrative medicine programs in major medical schools, and understanding and acceptance is exponentially more common than it was 38 years ago in that Nevada cookshack. People don’t have to be drawn by the scent of herbs steeping on a stovetop in a community founded by a shamanic philosopher. They can go to Whole Foods. They don’t need to take the years-long dive into the traditions that Upton took. They can go online.

But Upton knows that he might not have taken his journey any other way. The herbs called him, first with their scent, then with their power.